A reminder, the 4S is the "cheaper, lighter, slower" base version. Similar article at IEVS:

Porsche Taycan demand exceeds expectations in Europe
30,000 customers have made down payments and 10,000 have placed firm orders

https://www.autoblog.com/2019/12/11/por ... ectations/
Guy [I have lots of experience designing/selling off-grid AE systems, some using EVs but don't own one. Local trips are by foot, bike and/or rapid transit].

GRA wrote: ↑
Wed Dec 11, 2019 6:50 pm
Note that the City efficiency is lower than the Hwy efficiency, which shows the effects of a 5,132 lb,. curb weight. I suspect some of the rest is due to grippy, non-LRR tires. This is somewhat disappointing for the U.S., not that I think the typical Taycan customer will care given how the car will likely be driven.

They won't care about the range, but they'll go nuts if it doesn't beat a Tesla off the line or win the local street race.
2016 SV, New battery at 45K mi.
Jamul, CA
San Diego East County

After charging, for a driving stint that was mostly a low-speed freeway creep back to a staging area in downtown LA, we averaged 34.7 kwh per 100 miles (and 22 mph) over 13.6 miles. That stint suggested in the vicinity of 250 miles on a full charge.

This would add support that real world driving should look near the EPA ~200 mile range.

While the EPA 201 mile range for the Taycan may suck, as others have suggested, as long as it looks good and will work in town, most Porsche buyers won't care. Porsche buyers don't typically do long road trips in their cars unless it's a Cayenne or such family vehicle. Most will put at most 300mi/mo on their Taycans, I would bet.
Pulled the trigger on going EV on 10/2016 with a 2012 Leaf SL, traded it in and now I'm a very happy Tesla Model 3 owner. Reservations for Tesla Model Y and Cyber Truck.

First Porsche Taycan Gets Delivered In The U.S.

https://insideevs.com/news/389168/first ... ivered-us/
Guy [I have lots of experience designing/selling off-grid AE systems, some using EVs but don't own one. Local trips are by foot, bike and/or rapid transit].

A fact of probably zero concern to buyers.
Guy [I have lots of experience designing/selling off-grid AE systems, some using EVs but don't own one. Local trips are by foot, bike and/or rapid transit].

. . . I’ve taken numerous trips in many different electric cars, so I was never concerned about the Taycan even if its range did prove to be “just” 201 miles. But it’s now abundantly clear to me that the Taycan Turbo’s real world range is easily better that the number the EPA gave it.

My result of 287 miles of projected range in around-town driving shows that there’s ample cushion if you drive normally. It took 72.9 kWh to replenish the battery afterwards, and the math works out to a consumption rate of 34.8 kWh/100. That’s fully 29% better than the EPA rating of 49 kWh/100.

It's true that most EVs can exceed their rated range when driven prudently, but I've never seen this much margin on this course. Still, an EV's published range is conservative by design, the result of lopping 30 percent off the number generated by the EPA test protocol. As it happens, 201 miles is exactly what you get if you take 30 percent off my 287-mile result. I'm not saying that my course mimics the EPA EV test pattern exactly, but maybe this result says something about the by-the-book nature of Porsche's numbers in the context of the EPA procedure.

Better still, the numbers didn’t plummet on a more spirited road trip. Higher speeds and a bit of light hooning up a mountain had an effect, but it was nothing like I expected. My projected range was still more than 50 miles better than its official rating after all that. So let’s agree to stop wringing our collective hands about the 2020 Porsche Taycan Turbo’s range. It’s more than fine.

Then, 167.5 miles driven to Borrego Springs on freeway, four lane as well as some two lane roads (the kind that people buy Porsches for), including up and down Mt. Palomar, with 86 miles on the DTE (253.5 total estimated) on arrival, driving it more like a Porsche.
Guy [I have lots of experience designing/selling off-grid AE systems, some using EVs but don't own one. Local trips are by foot, bike and/or rapid transit].

This chart comparing the WLTP, EPA, and the range achieved by Nextmove is really interesting. 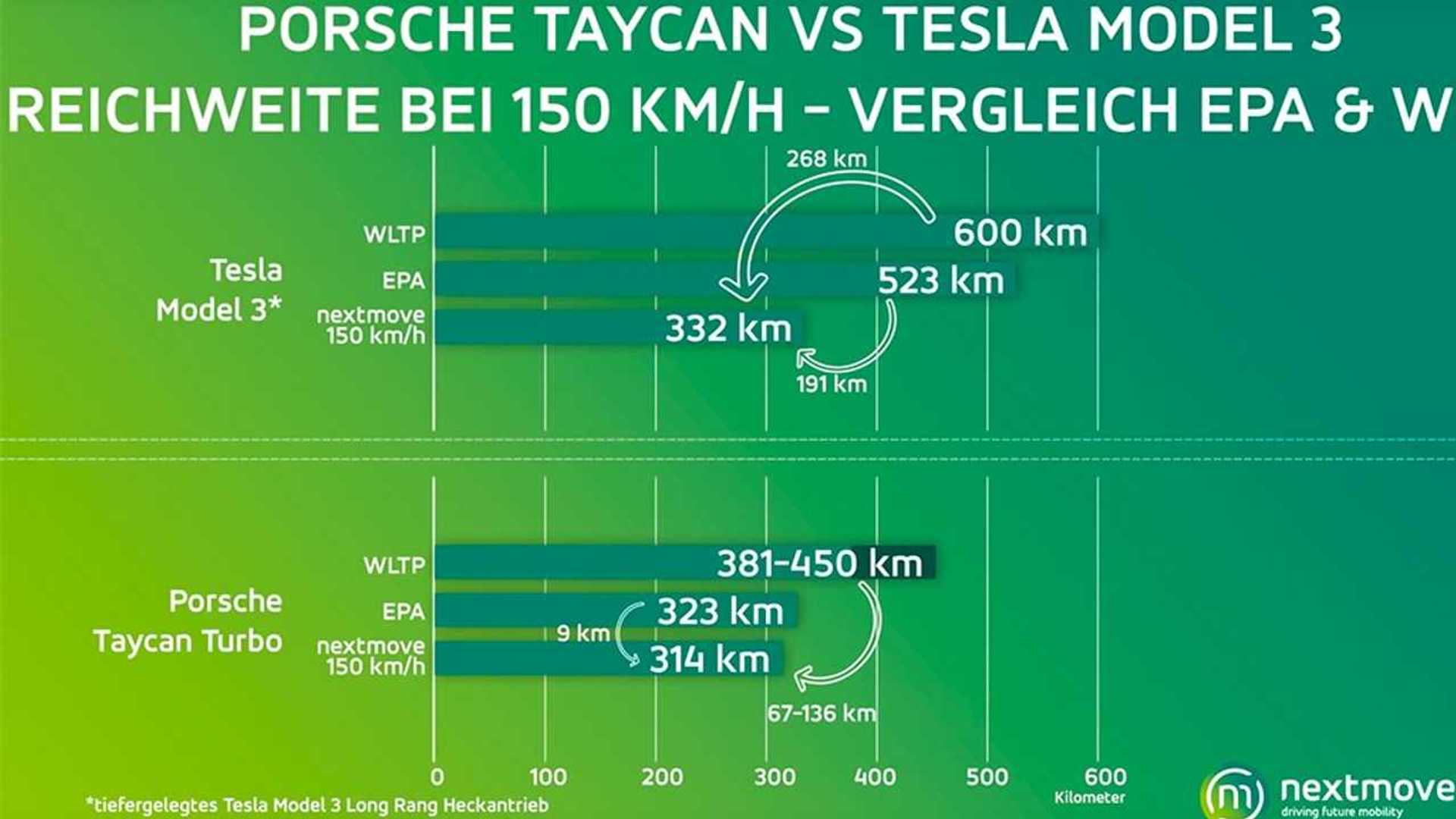