They state the range will increase from 191km to 320km (119 miles to 200miles). This is greater than a 50% increase. These numbers are on the Korean scale which is close to the EPA values. Not the European NEDC.

It also gives a higher number for fuel economy than was previously reported. 136MPGe

Am not sure why they would announce this upgrade so long in advance since it will hurt current sales. Perhaps the MY2017 will never be released in North America.

Looks like the max speed was ~35 mph, ambient temperature averaged about 77 F, and the whole drive took almost eight hours.

Increased efficiency means about 50% more range, with only ~33% greater available kWh than we had in our 2011 LEAFs.


“The Ministry of Environment officially approved that IONIQ electric’s mileage on a single charge is 191.2Km.
However, real mileage was confirmed to be 351.1Km, when it was tested.

IONIQ electric was driven at an average speed of 50Km/h (~31 mph) in a downtown like environment, using engine brake with 3-stage regenerative braking device.
Then, it recorded real mileage of 351.1Km, (~218 miles) which is higher than official mileage.

We drove around Hangang River four times, starting from Hyundai Autoway Tower Electric-car Charge Station.
As if it were in the middle of commuting, mileage was measured, while driving through downtown and congested areas, including Olympic highway and Gangbyeon highway.”

https://www.youtube.com/watch?v=OW56pVtWPJo
no condition is permanent

Earlier on this thread I wrote this:

JejuSoul wrote:Even though the IONIQ EV and the Chevy Bolt both have LG Chem battery packs the pack structure and the actual cells seem to be quite different. (Note the word seem - it is very hard to get any accurate info about the battery pack from Hyundai)

The IONIQ EV has a battery pack by LG Chem.
It has 192 polymer pouch type cells laid out in a series string of 96 sets of 2 parallel cells.
The IONIQ EV battery pack is 31 kWh and weighs 271.8kg -> Gravimetric Energy Density = 114 Wh/kg

The Chevy Bolt also has a battery pack by LG Chem.
It has 288 polymer pouch type cells laid out in a series string of 96 sets of 3 parallel cells.
The 2017 Bolt battery pack is 60 kWh and weighs 435kg -> Gravimetric Energy Density = 138 Wh/kg

I now have to reconsider because it seems the Bolt has 60 kWh usable capacity not 60 kWh total capacity as I wrongly assumed.
Making a rough guess that the actual total capacity is 66kWh then
The 2017 Bolt battery pack is 66 kWh and weighs 435kg -> Gravimetric Energy Density ~ 150 Wh/kg
This makes the Bolt cells better than previously assumed. This value is for the pack. The Bolt EV has a liquid cooled pack, so it is heavier than a comparable air cooled pack. I assume now that the Bolt is using cells that have a roughly 50% better energy density than the Ioniq.

As I commented above next year the Ioniq EV will get a 50% increase in battery capacity. I assume they will fit into the same volume as the current battery pack. This makes sense when we see those better cells already exist, and are already in production. The puzzle is why did Hyundai use the inferior cell at all. Why not go straight to the new cell.

AppleKnocker, member of the elbilforum.no Norwegian EV community, tested the highway range of three different electric cars at 120 km/h constant speed. The outside temperature was 3º C, the climate system was set to 22º C and the road was practically flat.

The results he got are not surprising, but very interesting.

https://www.youtube.com/watch?v=0kZgYdKmIKA
no condition is permanent

Impressive highway MPG of the hybrid (if ICEVs are of interest to you) suggests the BEV will also do well in highway efficiency and range.

We should know just how well, and be able to buy the BEV in only about a month, if the report below is correct.

Hyundai Motor Co. is gearing up to be a leader in fuel-efficient, hybrid vehicles starting later this year with its 2017 Ioniq family of vehicles.

The three-car lineup includes an all-electric, plug-in hybrid and a hybrid electric vehicle, or HEV, which will arrive by early next year with a combined miles per gallon of 58 — ousting the popular Toyota Prius Eco as hybrid mileage king...

The all-electric Ioniq, which will begin arriving in dealerships by year’s end is expected to achieve a range of 124 miles, while Hyundai is not releasing details of the PHEV until closer to its launch in the third quarter of next year...

If the ~110 mile EPA range is accurate, then the IONIQ is ~10% more efficient than the 30kWh Leaf. Which is pretty good!

NeilBlanchard wrote:If the ~110 mile EPA range is accurate, then the IONIQ is ~10% more efficient than the 30kWh Leaf. Which is pretty good!

...Hyundai predicts a maximum range of 124 miles—well short of Chevrolet’s 200-plus-mile claim for its new Bolt—but with a much higher fuel economy equivalency rating from the EPA: 134 MPGe city, 136 highway, versus 128/110...

If that 136 mpge highway cycle efficiency is correct, I'd actually expect the Ioniq to get close to 110 miles of freeway range, travelling at ~70 mph at ~70 F.

And confirmation of a significantly larger battery pack to be available in ~ two years:

..Interestingly, all three variants will use forced-air cooling for the batteries. Despite that, Hyundai is confident enough in the durability of its batteries to offer a lifetime warranty just as it does with its current hybrids. Hyundai is also developing a liquid cooling system which will be used with an upgraded version of the Ioniq that has a range of more than 200-miles and is scheduled to launch in 2018...

http://www.forbes.com/sites/samabuelsam ... 19bb023949
no condition is permanent 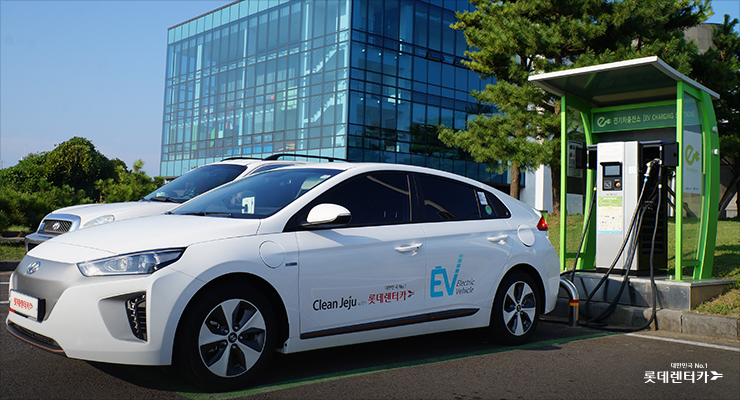 The fat lady sings at the EPA, and as expected, the Ioniq is the most efficient EV available in the USA:

It will be nice if Hyundai really lets you see all the payment options and the paperwork for your choice before you have to show up at the dealer:

At AutoMobility LA, Hyundai announced two new ways for drivers to get into the new IONIQ Electric: the “Ioniq Unlimited” electric vehicle subscription, and a partnership with car-sharing service Waivecar.

Ioniq Unlimited, besides offering a negotiation-free single-payment method, allows customers to select their exact vehicle from their preferred dealer’s inventory, choose a 24- or 36-month term, and preview their all-inclusive monthly payment online. Once they complete a credit application and are approved, they go directly to the dealership to complete the purchase. Once at the dealer, there’s no haggling; just sign a few forms and drive away in an advanced emissions-free electric vehicle. Hyundai tried to design the entire process to be the most transparent, stress-free and enjoyable ownership experience on the market today...