A great accomplishment . . . thanks for passing that on.

- boat length in the 3-5-meter range
- reasonably seaworthy as I won't be confined to just rivers and lakes (Puget Sound is calling)
- minimum two persons capacity, four is more likely what we want
- around 20mph top speed would be the target
- I'd like to get at least one hour of battery runtime at that top speed

I've settled on the catamaran approach. These are typically termed 'semi displacement' hulls. With long/narrow ('fine') hulls you can overcome the so-called 'hull speed' limit much more easily, because the waves generated are small enough to not contribute to overall drag as much as those of a monohull boat.

This boat would be an example of what I'm talking about:

(But longer than I'm looking for.) This style of boat has advantages (beyond better hydrodynamic efficiency) of a larger deck area than a similar sized monohull boat, and less risk of sinking (and no need for a bilge pump), as they can't be swamped ('self bailing'). Good rough-water handling is also a common feature of this style of boat, due to the 'wave-piercing' style of the hulls.

I've also broadened the scope of my interest to include 'personal watercraft' of the style outlined. Advantages here include hand-launchability (no need for a trailer or boat ramp) and two people (in two boats) can split up during explorations, and just generally have more fun, chasing/following each other around. There's also more redundancy in the event of a failure. And, this approach gives me something of a testbed, to try out ideas that may carry over to the full-sized version. These boats would of course only be suitable for small rivers and lakes.

Pursuant to that one-person-boat interest, I just ordered the Build Your Own Boat version of a Hydrobike:

You get a pair of hulls and a pair of crossbars. I'll add a small deck, seat, and motor mount, and try the two electric motors I have so far, and take it from there.
Pearl White 2016 Leaf S, 24kWh battery
Silver Enkei Racing RPF1 16x7 Wheels
Ohmmu T12403 LiFePO4 12V Battery
Nissan All-Season Floor Protectors

I'll most likely limit my updates here to significant developments. 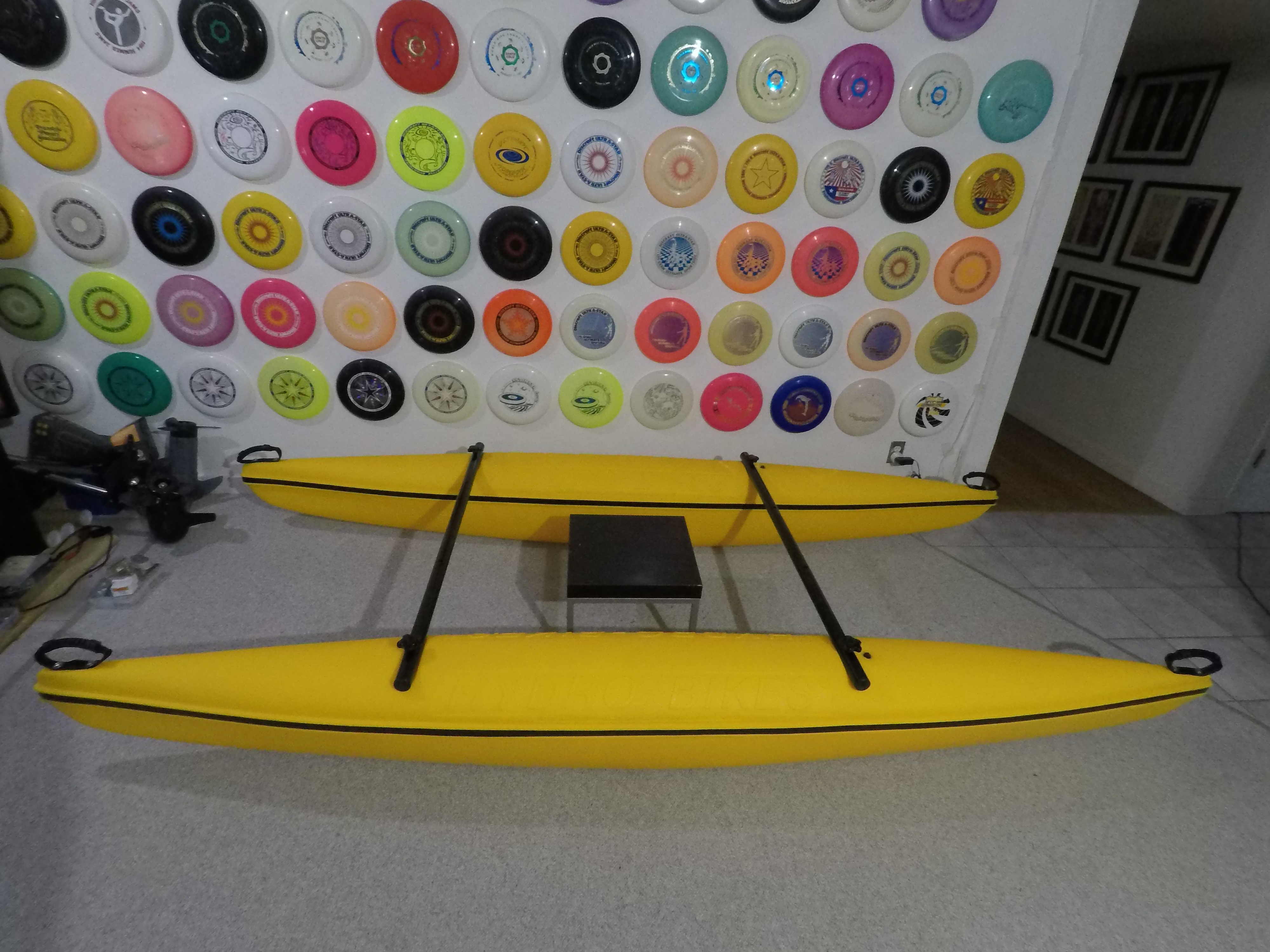 That's the Build-Your-Own-Boat kit from Hydrobikes (not counting the end table in the middle).

Near as I can make it with my bathroom scale, it weighs between 80 and 81 pounds. So I have ~445 pounds left to work with if I want to stay within the claimed capacity of the bike version (that weighs 125 pounds and can take another 400).

First up is to build a low-cost deck for prototyping purposes. I'll probably use Western Red Cedar fence slats for that, as they're light and cheap, and will allow me to easily experiment with different configurations and additions (transom, seat, battery box, ...).

Once prototyping is nearing completion, I'm going to want a lighter and more durable material to use for the deck. I have a number of options on my list so far, and other than aluminum diamond plate, composite material is looking the most promising. Coosa Composites makes some that's lighter/stronger than plywood, virtually impervious to the elements, and reasonably priced.

Besides opening up access to waters with no boat ramp access, this boat (and perhaps a second one like it) will serve as a test bed for trying out various propulsion and control approaches, with the hope that lessons learned there can carry over to the larger model I'll most likely be building later in the year.
Pearl White 2016 Leaf S, 24kWh battery
Silver Enkei Racing RPF1 16x7 Wheels
Ohmmu T12403 LiFePO4 12V Battery
Nissan All-Season Floor Protectors

Exciting! I can't wait to see what you do with this platform, and your plans for larger platforms to come!
~Brian

Thanks for the encouragement, Brian.

The deck is shaping up, and looks like it will come to somewhere in the 30-something-pound range. So I'll have around 410 pounds left to play with for batteries, motor, seat, and pilot. This initial deck is just a prototype; I can probably cut the weight down by almost half with use of better material.

In another few days, when the last of the parts I've ordered arrive, I should have this ready to go in the water. I'll post some more pictures then.
Pearl White 2016 Leaf S, 24kWh battery
Silver Enkei Racing RPF1 16x7 Wheels
Ohmmu T12403 LiFePO4 12V Battery
Nissan All-Season Floor Protectors

Cool stuff. The only real project I have been kicking around is expanding the house bank on my O'Day 22 in order to provide more range to my Torqeedo Travel. But the big question is how to charge it. I don't want to pull a bunch of lead batteries every time, nor do I want to pay for a slip with electrical hookup. Solar could be a viable option.
~Brian

I could see solar working for you, the biggest question would be how much panel space you have. And if you have a low duty cycle of using the batteries versus sitting in the sun, you could possibly get by with hardly any panel space needed.

At 20% efficiency (about as good as you'll easily get), 1kWp of panels needs five square meters. That's about three of the standard-size panels, which are about 1m x 1.5m. But you probably don't want panels made for the roof of a house (heavy), instead I see very light ('flexible') panels out there, that come in at around 40 pounds per kWp. Rigid panels are over three times that.

I find a good solar system topology to be one panel per 12V-nominal of battery pack. So a 48V-nominal pack would use four panels, then each panel feeds a small charge controller to charge their part of the pack. This can help solve balancing problems between the pack segments, but of course can actually cause those problems if your panels don't get similar amounts of sun. And, you can double/triple the panel count, with small, per-panel charge controllers in parallel to each 12V-nominal pack segment.

For the LiFePO4 packs I have, I find that these charge controllers work well: 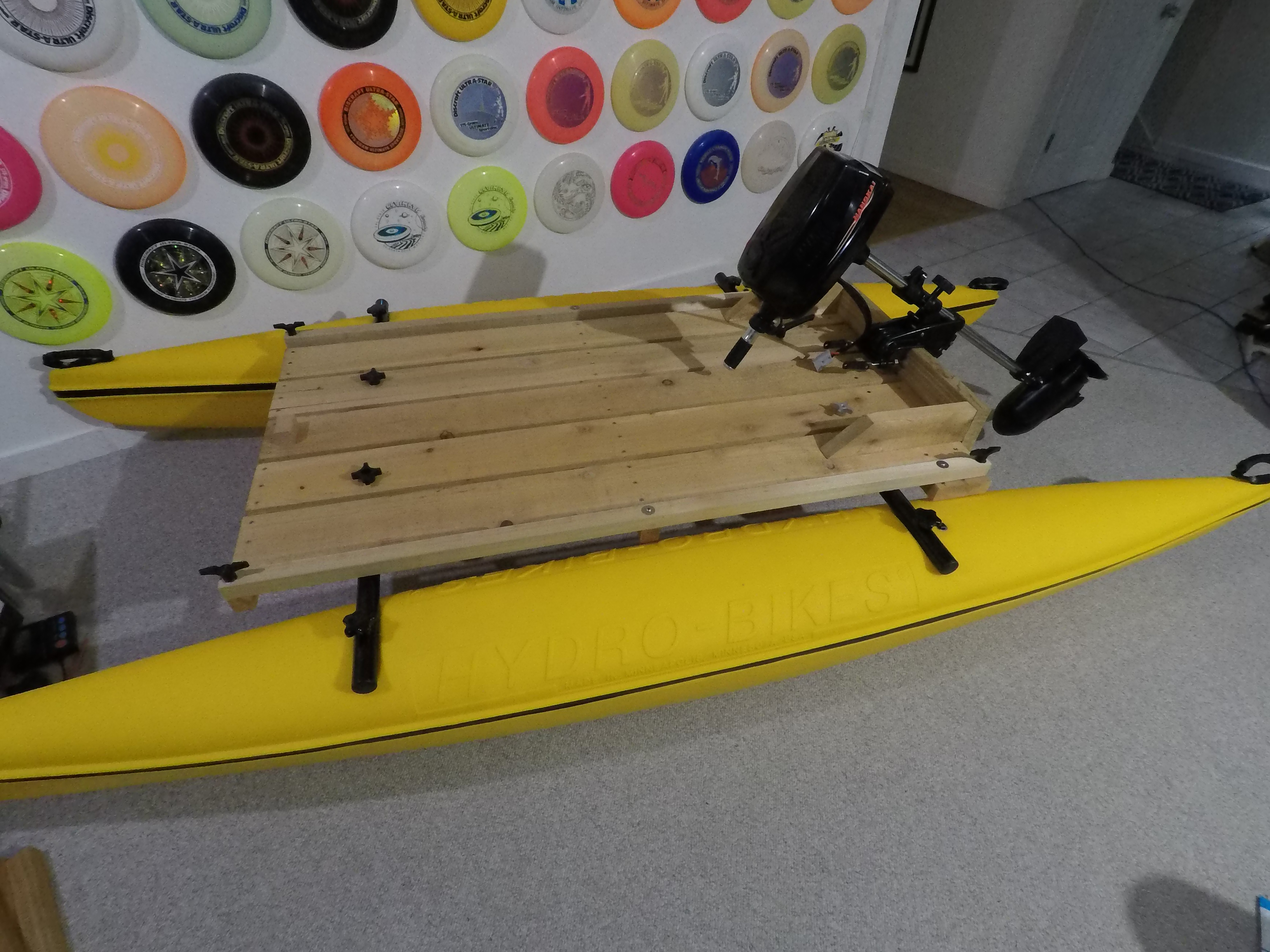 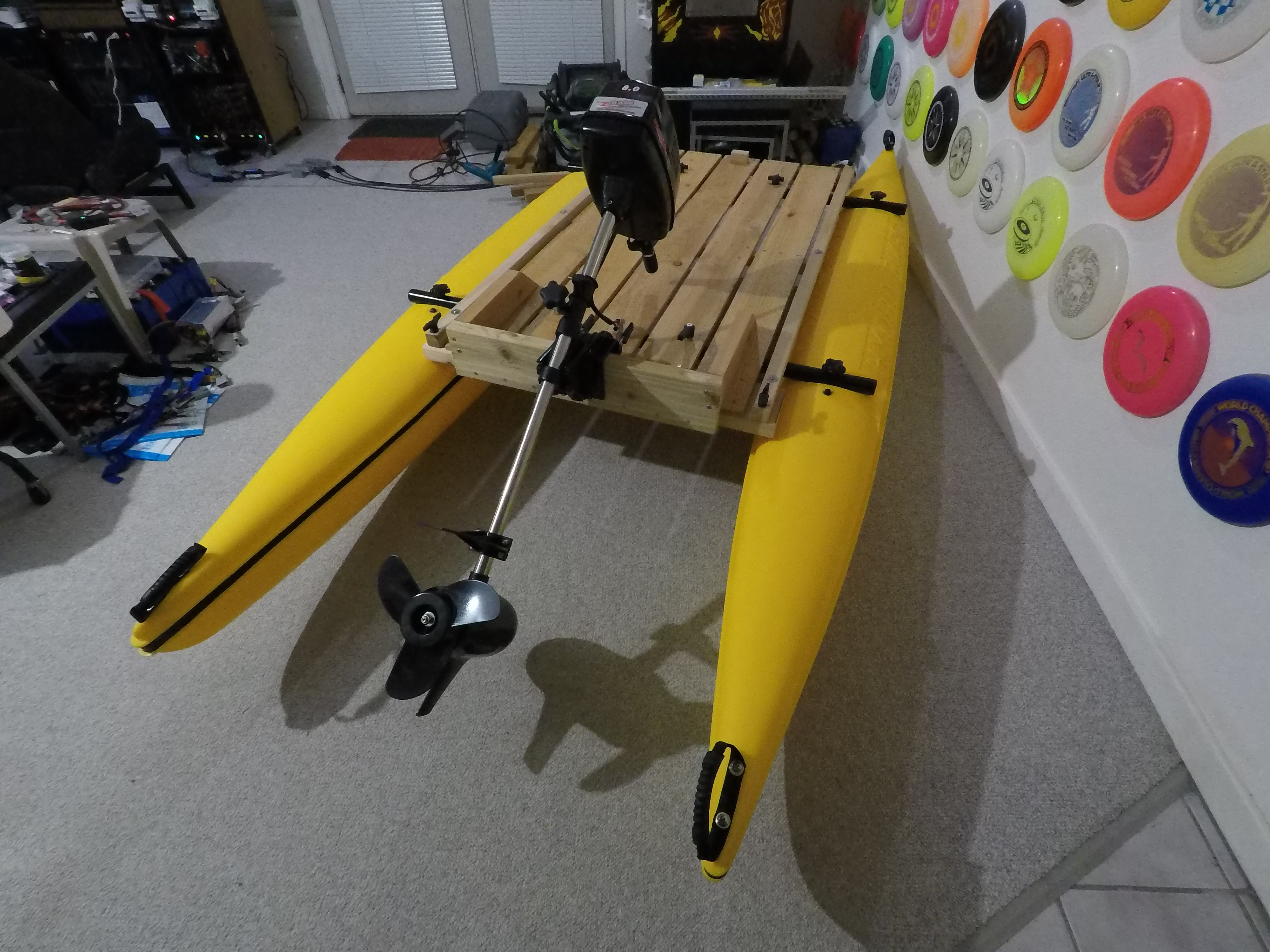