SageBrush wrote: No so.
The car has to be able to take the high power, and for long enough to make a difference.

Charging rates and capacity you think are worse boasting about right now, would be paltry "nothing to talk about" in the near future. It is just the beginning, there was no any break through yet.
Leaf 2015 SV CPO traded for 2019 Hyundai Ioniq EV Limited

Charging rates and capacity you think are worse boasting about right now, would be paltry "nothing to talk about" in the near future.

I understand that many of you folks post here using a phone and voice to text, but could you possibly proofread your posts a bit before sending them? They often get garbled fairly badly...
Scarlet Ember 2018 Leaf SL W/ Pro Pilot
2009 Vectrix VX-1 W/18 Leaf modules, & 3 EZIP E-bicycles.
BAFX OBDII Dongle
PLEASE don't PM me with Leaf questions. Just post in the topic that seems most appropriate.

Leaf15 wrote:...As opposed to adequacy of driving car on highway for long hours is as exciting as watching paint dry? Some folks are caught in the hype bubble, when they get exciting about upcoming visit to son's family because they need to use 30 charing stations? not spending all this extra time with him, this adequacy?

dgpcolorado wrote:You are projecting your own feelings and opinions on others and then grading them? That is seriously disturbed behavior. I'm done, welcome to "ignore."

Sorry pal, but I did not ask you about my feelings or opinions. Stay on topic , as you did not add anything to the discussion. Those "adequate" posts speak up a volume about posters and their "adequacy".
Leaf 2015 SV CPO traded for 2019 Hyundai Ioniq EV Limited

Just got back from a long-planned road trip to Oregon, Vancouver Island BC and Yellowstone National Park. Sixteen days and 4752 miles. The goals of the trip were:

•A routine visit with family in Oregon.
•To visit The Butchart Gardens in Victoria BC, a place I haven't been since I was 12 years old.
•A visit to Tofino, a beach town on the west coast of Vancouver Island and quite different from my longtime home in the rural Colorado mountains. (By the way, I grew up on the beach in Hawai'i, being fifth generation Hawaiian-born.)
•A visit to Yellowstone National Park, for the first time in thirty years (the year after the fires), in part to see how the plants are recovering.
•A chance to "collect" more Supercharger Stations for my list and join the "century club" of Tesla drivers that have Supercharged at 100 different Supercharger Stations.

Some pictures from the trip: 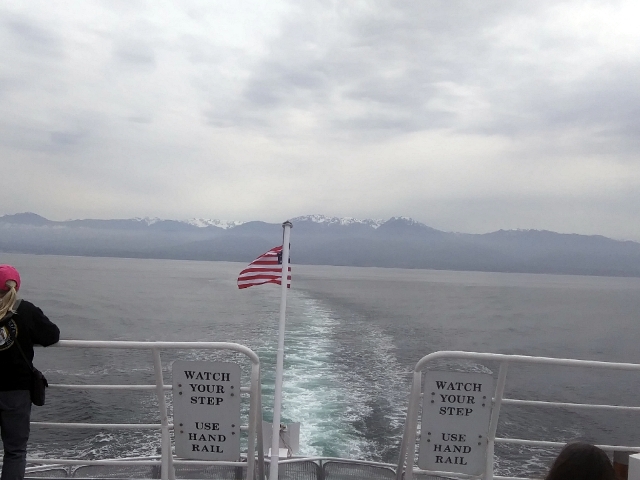 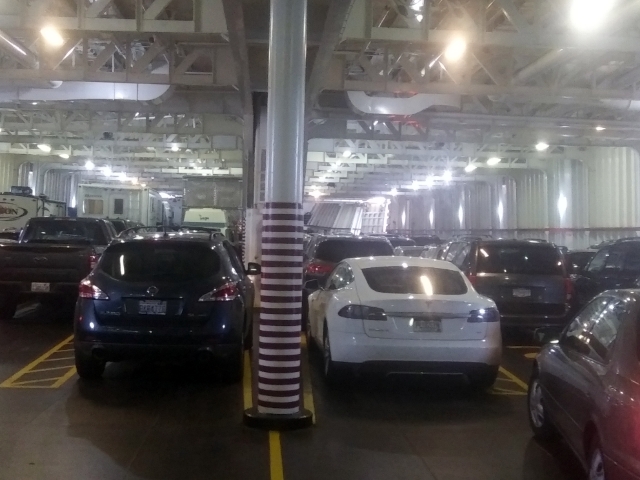 ^ I was the second to last "wait list" car to get on board the ferry, which made for a nice picture of my car at the back of the ship's hold.

In Victoria I camped at an RV park just outside of the city. I had a blast driving the curving, narrow roads in the hills around Victoria in the rain: many kilometers of roads with no straight sections nor any level sections at all, with traffic moving at twice the 30 km/h speed limit. Put my well-honed Colorado mountain driving skills to the test! I got a chance to visit The Butchart Gardens, a goal of the trip. It was raining but they supply umbrellas to visitors, a nice touch. The rain did stop while I was there and the gardens were well worth the visit and cost. A couple of pictures that barely scratch the surface of the gardens: 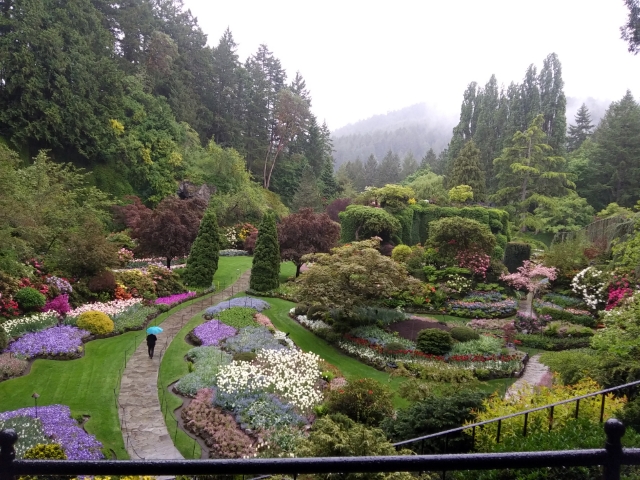 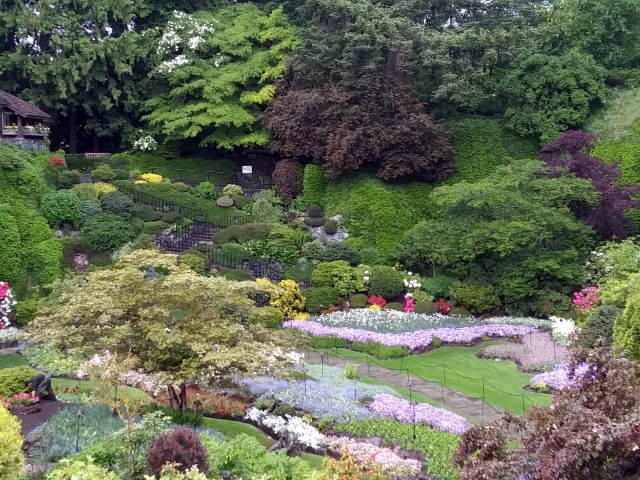 I spent three nights at Ocean Village Resort on Mackenzie Beach in Tofino BC. The resort had EV charging: 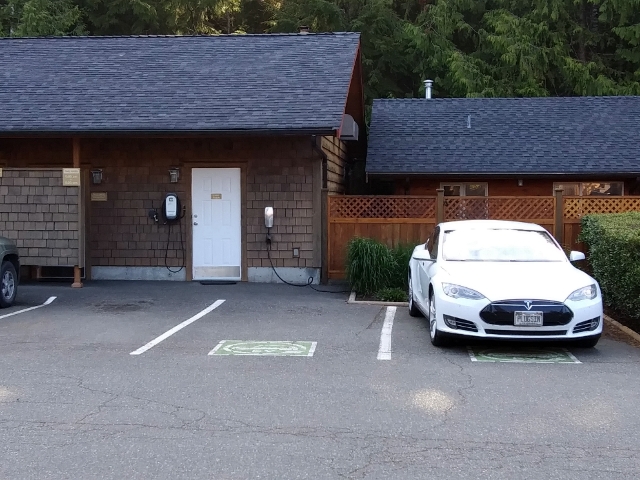 ^ The charging included a Clipper Creek J1772 and a Tesla EVSE. This was necessary for me to get my small battery S-60 back to the Nanaimo BC Supercharger Station. (As some here already know, Tesla supplies these charge stations to hotels and other destinations for free — yes, even the Clipper Creek J1772 for all EVs to use.) 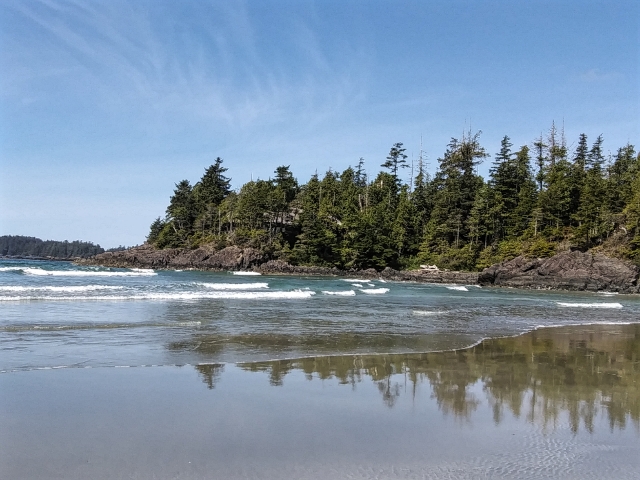 ^ Mackenzie Beach at Tofino. I lucked out with the weather and had sun my first day and just a few brief rain showers the second day, albeit with grey skies. It was sunny again the morning I left for Vancouver so I took another long walk on the beach before heading back to Nanaimo for the ferry. 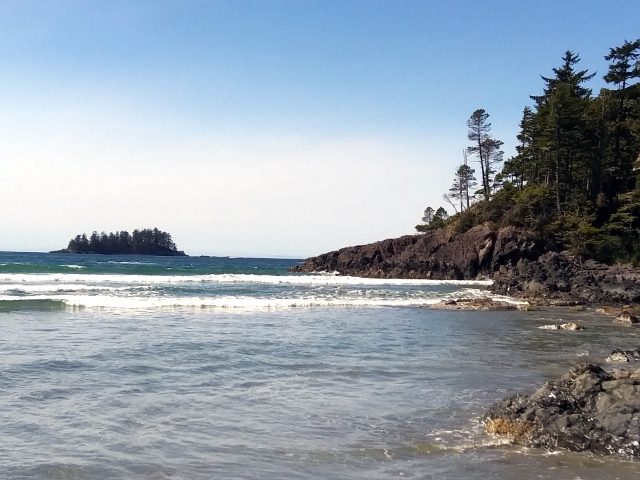 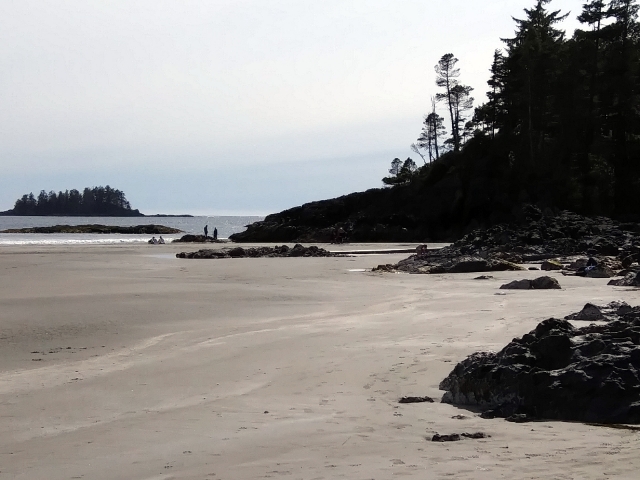 ^Low tide — it was quite a change!

I managed to collect some Supercharger Stations in the Vancouver area, including Whistler and Squamish; the latter is a town on a fijord at the base of a glacial cliff with a waterfall and the geology is reminiscent of Yosemite. Very scenic. It took more than 80 minutes to cross the border back to the USA since I don't have a Nexus pass. Of course I chose the wrong line: if you head south toward the border at Vancouver and don't have a pass for the Nexus line, be sure to stay in the left lane — it gets easier access to more border kiosks.

From the border I managed to collect Supercharger Stations in NW Washington. It was weird driving in British Columbia and NW Washington because my car was the only "exotic" license plate I saw. Every other car I saw for five days was from BC or WA. It is completely different at home in Colorado and Utah, where I routinely see plates from many states and Canadian provinces.

On the way to Yellowstone NP I stopped at Snoqualmie Falls in Washington: 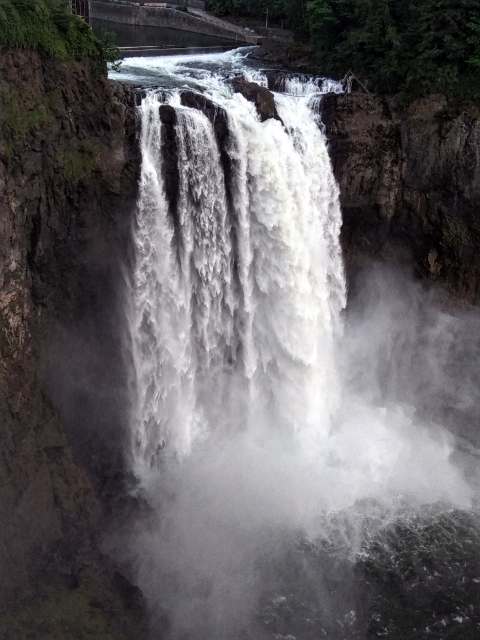 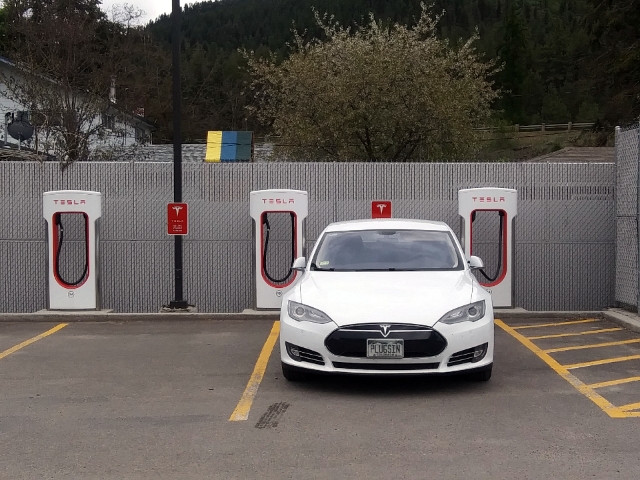 ^ This was my 100th different Supercharger Station, making me the 58th member of the "century club" at TMC. I ended up with 110. That's a far cry from the game leader, who has 695 last I checked!

In Yellowstone I had miserable weather, which I suppose helped me reserve a campsite since they had been full a week earlier. Rather than camp in freezing wet weather in a tent I just slept in my warm and dry car. I was at Madison campground in the park which is nicely laid out and has heated rest rooms. The morning I arrived I saw a grizzly and two cubs cross the road right in front of my car a few feet from the campground entrance. Headed toward the campground! I later learned from a campground receptionist that rangers had intercepted the grizzlies and convinced them to go elsewhere. One reason I chose Madison campground, the largest in Yellowstone with 238 spaces, is that I figured I'd be safer from bears in a bigger "herd" of campers! 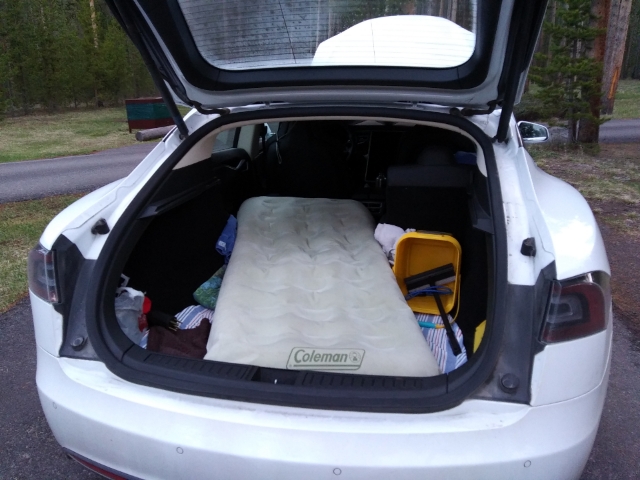 ^ My car will easily hold a full length air mattress for sleeping in the car, something I routinely do at RV parks and highway rest areas. The hatchback makes getting in and out very easy. 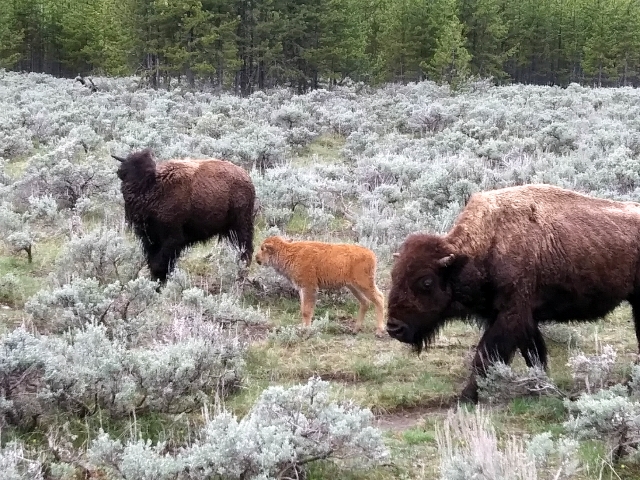 ^Bison at Yellowstone. The calves were quite frisky. 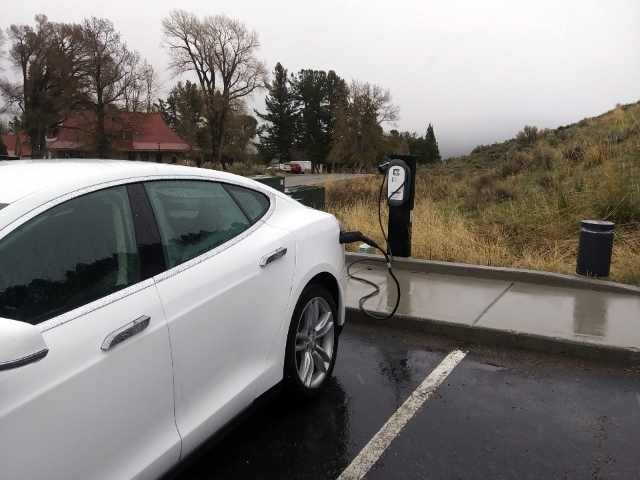 ^Level 2 charging at Mammoth Hot Springs, just to check it out. There are several L2 charging options in the area according to Plugshare. Most of my charging was at the West Yellowstone Supercharger Station. A reason I chose the Madison campground was that it was closest to West Yellowstone, so I could easily charge up in the morning before exploring the park. 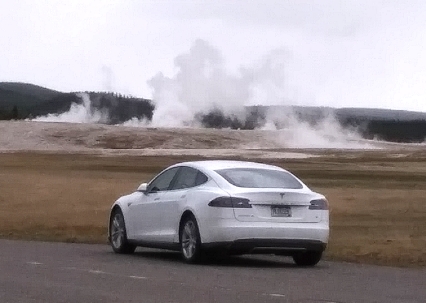 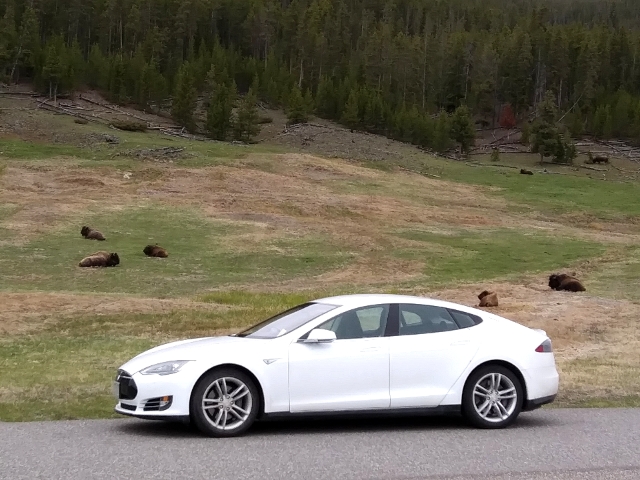 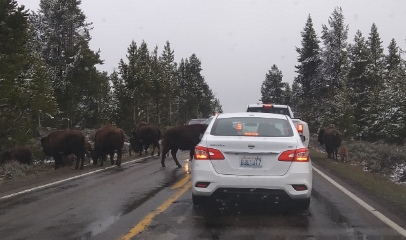 ^ Bison jam on the road. I ended up stopped for about fifteen minutes before a ranger managed to haze the bison herd off the road, after several unsuccessful tries. Yes, that's fresh snow on the trees. On May 20th. Did I say "miserable weather?" 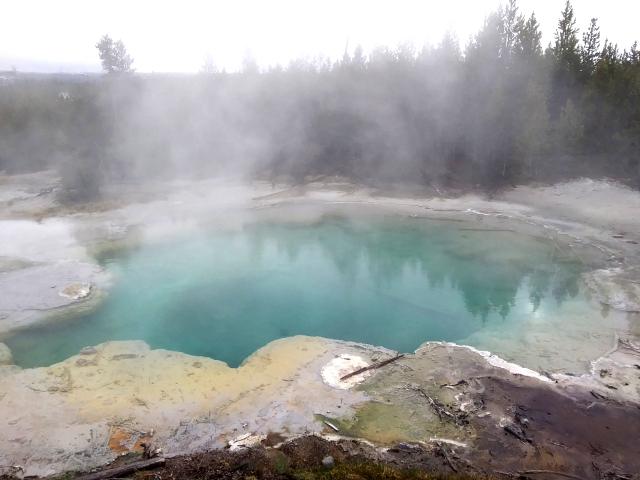 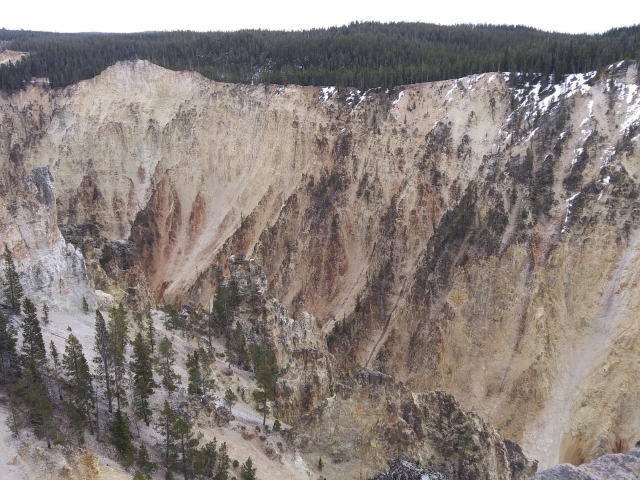 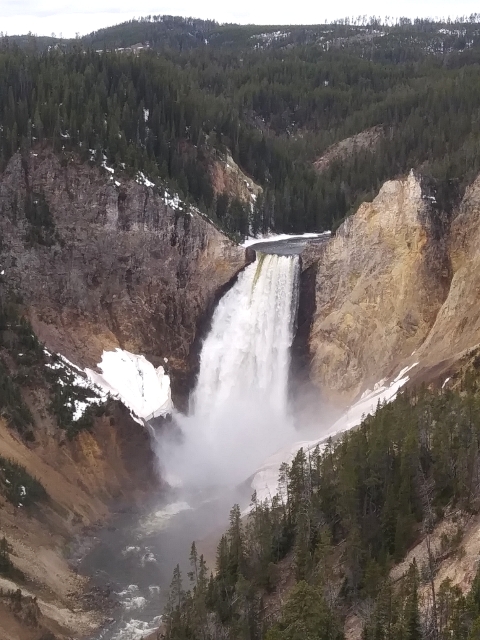 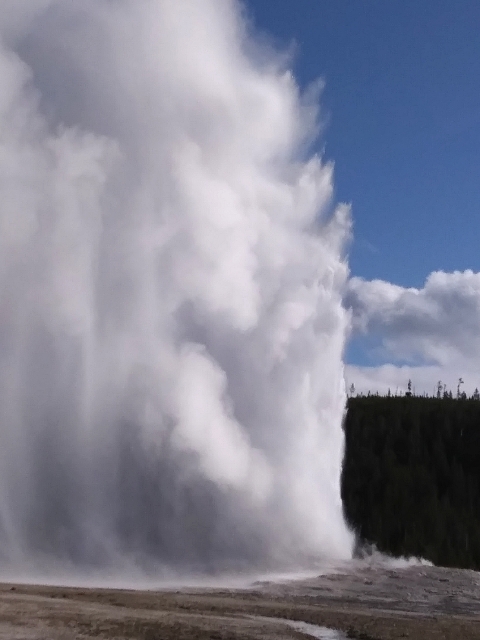 ^ Of course, a picture of Old Faithful Geyser, which was running a few minutes early on my visits.

Of interest to the "other EVs" forum at MNL, on this trip I saw my first ever Kia Niro, Jaguar iPace, and Hundai Kona EVs. We don't have them out in the boondocks where I live. I also saw hordes of LEAFs in Victoria BC and Portland OR, no surprise. The Kia Niro I saw at the Centralia WA Supercharger Station: 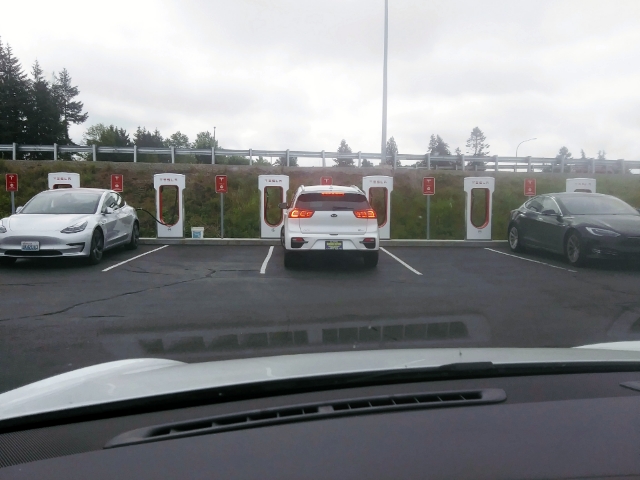 ^ Brand new Kia Niro driver trying to plug-in to a Supercharger stall! After a couple of minutes she realized it wasn't going to work and drove off.

The Jaguar iPace and Hundai Kona I saw in Victoria BC. It was fun to see these rare EVs in person for the first time.

And, in answer to the question of how a solo driver manages to enjoy thousand mile road trips: I listen to audio books! It is something I've been doing since my ICE driving days and it makes long stretches of road more fun. I do have to turn the audio books off when dealing with traffic in cities because we don't have traffic where I live (or even multi-lane roads) so I have to concentrate on my driving and the other cars.
Blue 2012 SV Dec 2011 to Feb 2016
CPO 2014 Tesla S60 Mar 2016
One car, no ICE, at last!

Nice photos. None of the grizzlies looking for a long pig breakfast?

DaveinOlyWA wrote:Great adventure! I am guessing the other guy did 650 stations at less locations? Didn't think there was that many SCs in North America

According to supercharge.info/charts, as of May 2019 there are over 1500 SuperCharger stations with over 13,000 charging positions in the US alone. Quite possible to use over 650 stations. There is one member of the Tesla forums who logs well over 80,000 miles per year all over North America and is the person holding the record. No doubt he’s done at least that number of stations.