Sure BEVs will continue to improve, the question is will sales improve at the rate they need to reduce the size of the environmental problem we face, without subsidies. So far, the answer is no, in the U.S. and elsewhere, although if gas prices remain at their current levels for a while longer that will help the economic argument.

Sales can't improve faster than production. BEVs have been production constrained during much of the time while market share grew from 0.1% to 2.5%. That's a factor of 25. Best guess is the next decade is close to another factor of 25. Production limited is likely true in the future, worldwide BEV sales will mostly be limited by production.


Yes, they will be, which is why I favor also developing alternative ZEV techs, so that any production and/or resource constraints can be better managed, plus it allows picking the right tool for the job.

Hydrogen has sold a few thousand cars with massive subsidies. If the same subsidies had been allocated to charging, far more DCQC stations would be available.

Spreading bets on technologies works when you don't know what will win. We know that hydrogen loses for at least decades into the future. So why bet on hydrogen?
WetEV
#49
Most everything around here is wet during the rainy season. And the rainy season is long.
2012 Leaf SL Red (Totaled)
2014 Leaf SL Red
2019 eTron Blue

WetEV wrote: ↑
Sat Nov 06, 2021 6:29 pm
Personal transportation isn't the biggest part of the environmental problems we face. Production of materials will require massive amounts of green hydrogen, which is decades or more away.

Depends on the country/region. In some areas it's transport, in other areas it's buildings or electricty production or manufacturing or . . .


We've argued this ad nauseum so I'm not going to re-hash the same arguments again.

So then you agree that FCEVs are dead?


Of course not, for all the reasons I've stated numerous times. For passenger FCEVs the jury's still out; for heavy transport FCEVs (and related H2 fuels) are a go, as perusal of the numerous articles I've posted excerpts from in the "H2 & FCEV" and "AFV truck and commercial vehicle" topics clearly shows.

Then you don't have a problem ending subsidies for passenger FCEVs. Which sell below MSRP in the tightest car market in memory.


As long as you're comfortable only selling to that 2.5%, fine, but why do the wealthy need let alone deserve subsidies?


When driven by subsidies, perks and mandates, they may be. Current high fuel prices should help tip some people who're on the fence.

GRA wrote: ↑
Sat Nov 06, 2021 4:05 pm
OTOH, the most common PHEV I see (typically #3 or #4 in my occasional Friday evening commute PEV surveys, behind the Model 3 @#1, then either the Model S and/or Model Y) is the Prius Prime, which at $29,175 base MSRP + dest. is affordable by the typical new car buyer without subsidies. It's a half-assed conversion of the regular Prius, like the Fusion and C-Max Energies, but it's efficient, affordable and can eliminate 50% or more of emissions. Spending a couple thousand more will allow people to buy a PHEV like the Niro or Kona without the Prius Prime's mediocre driving dynamics and space limitations. Nicer to drive is important, but it obviously doesn't outweigh price or other factors in most people's minds (or wallets).

More convenient, cleaner, and soon to be cheaper BEVs will make PHEVs just as obsolete as ICEs.


ICE PHEVs, sure, if for no other reason than they'll eventually be banned. In the meantime they can eliminate 50% or so of emissions, in the areas where pollution is worst, and do it a price the average new car buyer can afford. The jury's still out on passenger PHFCEVs, for much the same reasons as FCEVs.

And the additional reason that PHFCEVs don't really exist, in any commercial sense of the word.

Consider PHEVs might exist long term, with relatively expensive synthetic liquid fuels produced by solar, or with more expensive biofuels.
WetEV
#49
Most everything around here is wet during the rainy season. And the rainy season is long.
2012 Leaf SL Red (Totaled)
2014 Leaf SL Red
2019 eTron Blue

GRA wrote: ↑
Sat Nov 06, 2021 4:05 pm
Sure I've heard about ARPAnet, and that was a government-sponsored development to tie research organizations together. As we all know it grew well beyond that, but there were no direct-to-consumer subsidies.

Point no point. Send/receive any emails from GEnie over the Internet? Was NSFnet by then, still government paid to move the data. Overlap between GEnie email gateway and NSFnet was only 2 years, so perhaps you never had government funded packet transport.

My first email was about 1982. The Internet was very government then.

In well less than a decade, I expect BEV subsidies mostly to go away. So like Internet late comers, BEV late comers will not get the subsidy discussion. Because they didn't get one.


Good, then we agree that BEVs still aren't ready to compete on their own without subsidies, for at least 3-5 years and maybe longer.

Nice you putting words in my mouth. BEV subsidies still have an impact, the optimum course is likely still subsiding BEVs for a few years. Phaseout of BEV subsidies would delay replacement by perhaps a year or two.

Phaseout of NSFnet was necessary, at some point. When to phase it out was debatable.

BEVs grow at an increasing rate until about 2035. They are optimistic about fuel cells after then. All I can say is maybe. Notice that most of the displacement of ICE comes from BEVs. 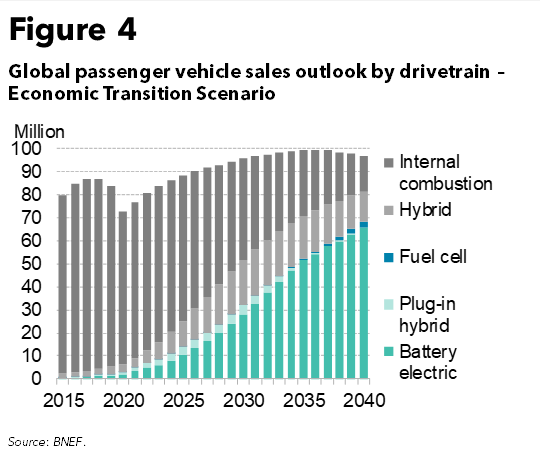 
That's one forecast but obviously doesn't represent the case here, and "Build Back Better" wants to increase the fed. tax credit to a max. of $10k or even $12.5k, although hopefully that won't pass the Senate. I'd much rather see the money spent on charging/fueling infrastructure, because that along with price and range are the critical roadblocks to mass adoption.

Price is going down, range is going up. Yes, charging needs to be built, but there is little point spending money on Hydrogen fueling. Hydrogen is mostly dead.

You're once again Ignoring what's actually going on.

The politics can be nothing but a distraction from the economics. As the cost (and eventually the price) is falling, subsidies have a time limit.
WetEV
#49
Most everything around here is wet during the rainy season. And the rainy season is long.
2012 Leaf SL Red (Totaled)
2014 Leaf SL Red
2019 eTron Blue
Post Reply
Load more posts
48 posts