About time we got something going in that direction!


Is that one that big a deal, considering you've got Kent, Covington, Tacoma and Lacey fairly close by? I'd think one a lot closer to Rainier would be more useful.

If there's a Chargepoint DCFC thread I'm not aware of it, so I thought I'd post this here.

A DCFC complex is under construction in Montrose CO, three blocks from the intersection of US 50 (Grand Junction, Monarch Pass, Pueblo/Colorado Springs) and US 550 (Ouray, Red Mountain Pass, Durango, Farmington, Albuquerque). The site is located at N 1st Street and Uncompahgre Avenue and will have eight Tesla Superchargers and two Chargepoint DCFC stalls; it is being built with the enthusiastic support of the City of Montrose and DMEA, the local electric co-op.

The Chargepoint equipment has just been installed: 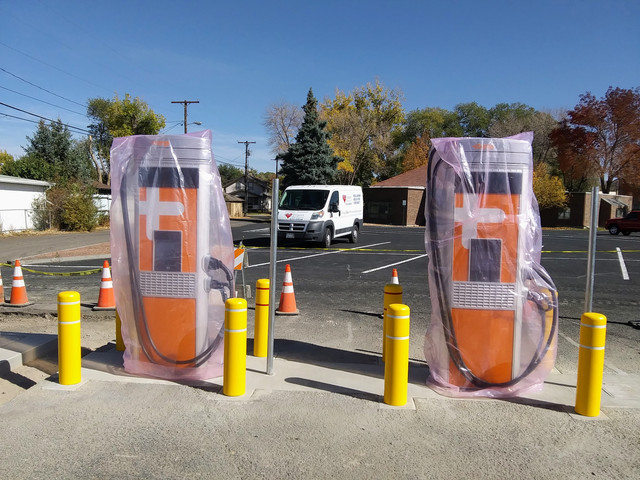 Each of the two Chargepoint towers has both CCS and Chademo cords.

We should probably start threads for each of the other major networks (e.g. ChargePoint, EVgo, etc.) I also don't know of a ChargePoint network thread off the top of my head.
'19 Bolt Premier
'13 Leaf SV w/premium (owned)
'13 Leaf SV w/QC + LED & premium (lease over)

Here is a thread to cover the other charging networks.

EA has altered their map to identify sites which are solar-powered. AFAIA this only applies to local sites which are L2-only. There are 4 of these clustered around Fresno.

Also, they've added a "Coming soon" site on U.S. 101 in Newport, OR, a useful coverage expansion. There's another new "Coming soon" in Lovelock, NV on I-80, a needed infill between Fernley and Winnemucca (129 miles, but 159 miles between Sparks and Winnemucca. Lovelock is 88 miles from Sparks and 71 from Winnemucca).
Last edited by GRA on Tue Oct 27, 2020 4:58 pm, edited 1 time in total.
Guy [I have lots of experience designing/selling off-grid AE systems, some using EVs but don't own one. Local trips are by foot, bike and/or rapid transit].