I didn't buy this for my Leaf, but figured there were a lot of battery tender Jr owners here.
It seems a good price and i need something for another car i don't drive much.
u
https://slickdeals.net/f/10679860-batte ... edit-18-99

when i connected to the leaf 12v battery, the battery was already quite full as measured by a voltmeter (12.8V or something)
anyway, the BTjr it was indicating solid red ("bulk charging"; 750mAhr for the Jr.); it stayed that was even though a couple of hours later voltmeter read 13.1V
Isn't is supposed to switch modes based on voltage?
The next mode is blinking green.

I left it on the car i don't use overnight, and in the morning (so maybe 12 hours later) voltmeter was reading 14.1 and still solid red.

12.8 volts isn't really "quite full." I've never had a BT JR fail, and I have several of them. Give it a bit longer.
Scarlet Ember 2018 Leaf SL W/ Pro Pilot
2009 Vectrix VX-1 W/18 Leaf modules, & 3 EZIP E-bicycles.
BAFX OBDII Dongle
PLEASE don't PM me with Leaf questions. Just post in the topic that seems most appropriate.

thx -- I'll try and be more patient and report back

Also, make sure you top up the cells with distilled water.
2018 SV
Deep Blue Pearl

I have three of these units. I use one for my Leaf, one for a Chevy diesel truck with two large 12V batteries (in parallel), and one for motorcycles. The charge rate of 0.75 amps will get the job done eventually, but if your battery is very low, it takes a while. Also, when you charge a battery while it's installed in a vehicle, a portion of the charge current ends up powering the vehicle electronics instead of charging the battery. For example, if your leaf is drawing 0.25 amps, then there is only 0.50 amps going into the battery. That makes it take even longer. A fully discharged battery could spend days in the bulk charge phase.

The charge phases and LED states are:

But what does this actually mean? I was curious about what the charge profile looks like, so I gathered some data. What you see below is the charge profile and LED states when I charged a 51R battery outside of the vehicle after it had been discharged by a 30 amp load for 1 minute. This means approximately 1/2 amp-hour of charge would be required.

First is the bulk charge phase: In this phase, the output voltage is adjusted to keep the output current at 0.75 amps. As you can see, this phase lasts as long as necessary to bring the battery up to about 14.4 volts. Next comes the odd-looking blinking green phase. This always seems to last 15 minutes, no matter what. I'm not sure what algorithm is used to set the voltage (or current) during this phase. When that's finished, the solid green float charge phase starts. In this phase, the output remains at 13.1 volts indefinitely.

In case you are not familiar with lead acid batteries, do not worry about these voltages being much higher than 12V. This is expected, and perfectly fine for the battery and vehicle electronics. 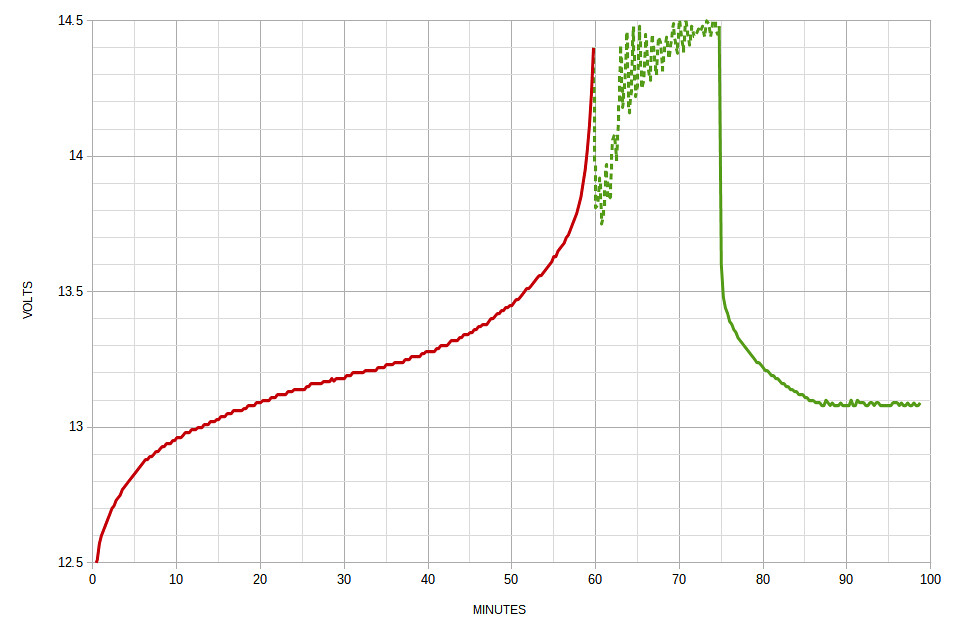 So, if your battery is stuck in the solid red phase and it's below 14.4 volts, that probably just means it's slowly charging. If the voltage doesn't go up measurably in a few hours, something may be wrong.
2013 Pearl White SV, bought used in 2017 with only 5100 miles. Vancouver, WA.

Nissan Leaf's are terrible at keeping the 12v battery healthy. I plug in my battery tender to my leaf once a week during the winter and once a month during the summer, overnight. The very first time I did this.. the reading for the battery said it was ok but the tender knew better and did it's job.. red for ages and then balancing out much later than I thought. Once i started the schedule or running the tender regularly it was much faster.

I also found all the DTC error codes I had were related to the 12v battery not being able to do its job. Battery Tender took care of that.
Statler: Wake up you old fool. You slept through the show.
Waldorf: Who's a fool? You watched it.

I bought a 2 amp Diehard maintainer a few years ago, to get more speed. It Did NOT live up to its name, and died after about a year. Now I just use the BTJ.
Scarlet Ember 2018 Leaf SL W/ Pro Pilot
2009 Vectrix VX-1 W/18 Leaf modules, & 3 EZIP E-bicycles.
BAFX OBDII Dongle
PLEASE don't PM me with Leaf questions. Just post in the topic that seems most appropriate.

So a blinking green + red means it's charging and also de-sulphfying?
I haven't used my Battery tender in a while and wouldn't you know, on one of the first cold days(today) my '12 Leaf failed to start! A push of the power button and all the lights came on but no ready light. I was sure it was the 12v battery so I got out my VOM and low and behold the 12v battery was only reading 9v. I hooked up my $40 12v lithium battery jumper(something I always carry in my Leaf) to the battery and it went to 12v within 30 seconds. I got in and my Leaf started like a champ. As soon as it started the 12v battery went to 14v.
Now I'm thinking the low 12v battery could have been somewhat caused by my main battery only being a SOC of ~20%?? When I got home(less than 5 minutes from where I had to jump start the Leaf) I measured the 12v battery(Leaf off) and it was 12v, as soon as I plugged the Leaf in to charge the traction battery the 12v battery went to ~13.5v, occasionally jumping to 14v. I then hooked up my Battery Tender and the red and green lights both came on, shortly after the green light started to flash(hence my first question). If I unplugged the J1772 cable the green light continued to flash, then I power cycled the Battery Tender and the flashing stopped and went solid. As soon as I plugged the J1772 cable back in the flashing started. I'm wondering if I should go out once the traction battery is charged and power cycle the Battery Tender to get it charging again? I believe once the Battery Tender starts to flash it might not start charging again unless I power cycle it, even if the 12v battery goes back low....
If this happens again I'll just replace the 12v battery, AFAIK it's the original and being a '12 could be 5+ years old. I already have a spare Optima Yellow Top I purchased last winter when I was suspecting the battery but after using my Tender every couple of weeks or so it gave me no problems last summer so I kept the original battery in the Leaf and just occasionally used my Tender on the spare Optima.
2012 SL purchased used 2/'16
2013 S w/QC purchased new
Juicebox Premium 60a L1/L2 EVSE, Ebusbar 16a L1/L2 EVSE
'12 EVSEupgrade'd 20a L1/L2 EVSE, '13 EVSEupgrade'd adjustable 6-20a L2, 6-13a L1 EVSE
Zencar 13, 20, 30a L1/L2 portable EVSE
GE Durastation 30a
Post Reply
Load more posts
24 posts