Thanks nateads, that would be useful.

The evidence in my case points strongly towards the parking brake. I have been avoiding using the parking brake at all and the noise is absent. I shall try to remember to use the brake when I have parked reversed in so that I'll be driving out forwards and we'll see (or hear!) the result. With the weather as it is currently here (UK) I am reluctant to grovel on my hands and knees to look inside the brakes so the remedy, if there is one, will wait until better weather arrives.

My leaf from 2015 recently has the same problem ( over 40.000 km) Only when reversing i hear continuous squealing. Last days when reversing further i hear clunking noise and feel the brakes gripping.

When driving forwards there is no noise but after jacking up the left rear I feel the rear wheel brake drags.
I removed wheel and brake caliper and pads to get the brake disk/drum off. I could locate the lever that acts the brake shoes and is pulled by the parking brake cable and managed to force it a bit back. The parking brake is drum brake type and now ran without drag. So some how the parking brake pedal does not fully release the cable any more.
For the moment i loosened the brake shoe adjuster 3 clicks and now the left rear wheel does not squeal or clunk when reversing but the other side still does. So luckily the problem is not with the disk brakes or hydraulics.

A bit of a mystery what has happened as there was no rust or signs of water near the rear brake shoes and cable and I never had this since 2015 !

Have to look under the rear seat they say, under a lid should be the cable coming from the parking brake pedal and an equalizer that controls both rear wheels and a return spring.
Problem is that I cannot get the rear seat up. They say it is mounted with two loops that should click out. Don't want to put too much force on it.

Has any one got the rear seat up and looked under this lid for the parking brake cable ?

The return spring may have broken. I haven't personally removed a Leaf rear seat, but I've read that it requires quite a bit of force to get it out...
Scarlet Ember 2018 Leaf SL W/ Pro Pilot
2009 Vectrix VX-1 W/18 Leaf modules, & 3 EZIP E-bicycles.
BAFX OBDII Dongle
PLEASE don't PM me with Leaf questions. Just post in the topic that seems most appropriate.

Has any one got the rear seat up and looked under this lid for the parking brake cable ?

The rear seat on my 2015 was very difficult to remove. Here's a post I made on that:

There are several problems.

1 - Wheras the 2012 rear seat had some rigidity, the 2015 "rear cushion" has no real frame strength.
2 - The clips hold with tremendous force.
3 - the metal loops are wrapped with cloth adhesive tape. This may ruin whatever chance the clip had of releasing.
4 - there is no way to get any kind of tool involved to press in on the tabs that hold the clips in place

It's difficult to remove without damaging the clips, the holes they fit into, or the seat itself.

Here's a picture of the underside of the seat. The receiving clip is still attached to the metal loop It just wouldn't let go. Now that it's exposed I can push in the tabs to remove it.

Here you can see the frame hole where the clip is supposed to reside. You can see the hole is distorted a bit. That's how hard I had to pull to get a release. Next to the hole is the clip from the passenger side, which finally did let go of the metal loop after some wrasslin'.

There's no way to get at the clips to make them release. On the driver's side I was able to get the thing to pop out by grabbing both the front of the seat directly in front of the clip, and also the rear of the seat and pulling up from both ends finally got it. It took a LOT of force. I'm probably going to have to bend the cushion back into shape a bit and also have to tap that hole back into shape.

On the passenger side I finally got it out by kneeling outside the car, snaking my arm along the top of that ridge, wrapping my hand around where the clip was and then lever-ing it out.

Were I to try this again I think I'd tie a rope into a noose, get it fished around the clip, cinch it down and the pull up with that from the front side of the seat. This would concentrate the force right at the clip interface. There just isn't enough strength in the seat itself to transmit force effectively.

Dammit Nissan, why did you make it so hard? People do want to put on seat covers occasionally!

Since Photobucket has since decided to be assholes, here are the unmolested images 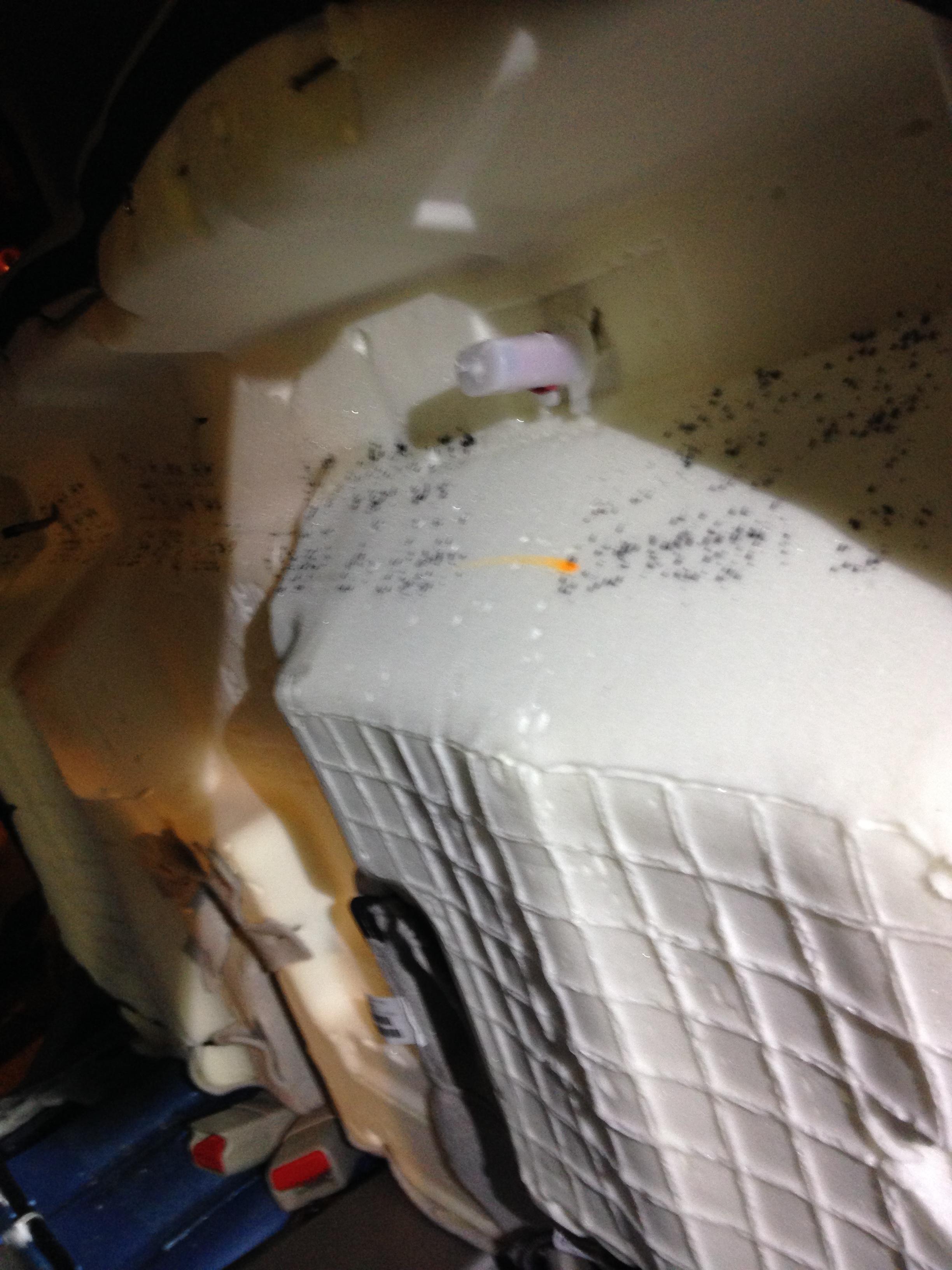 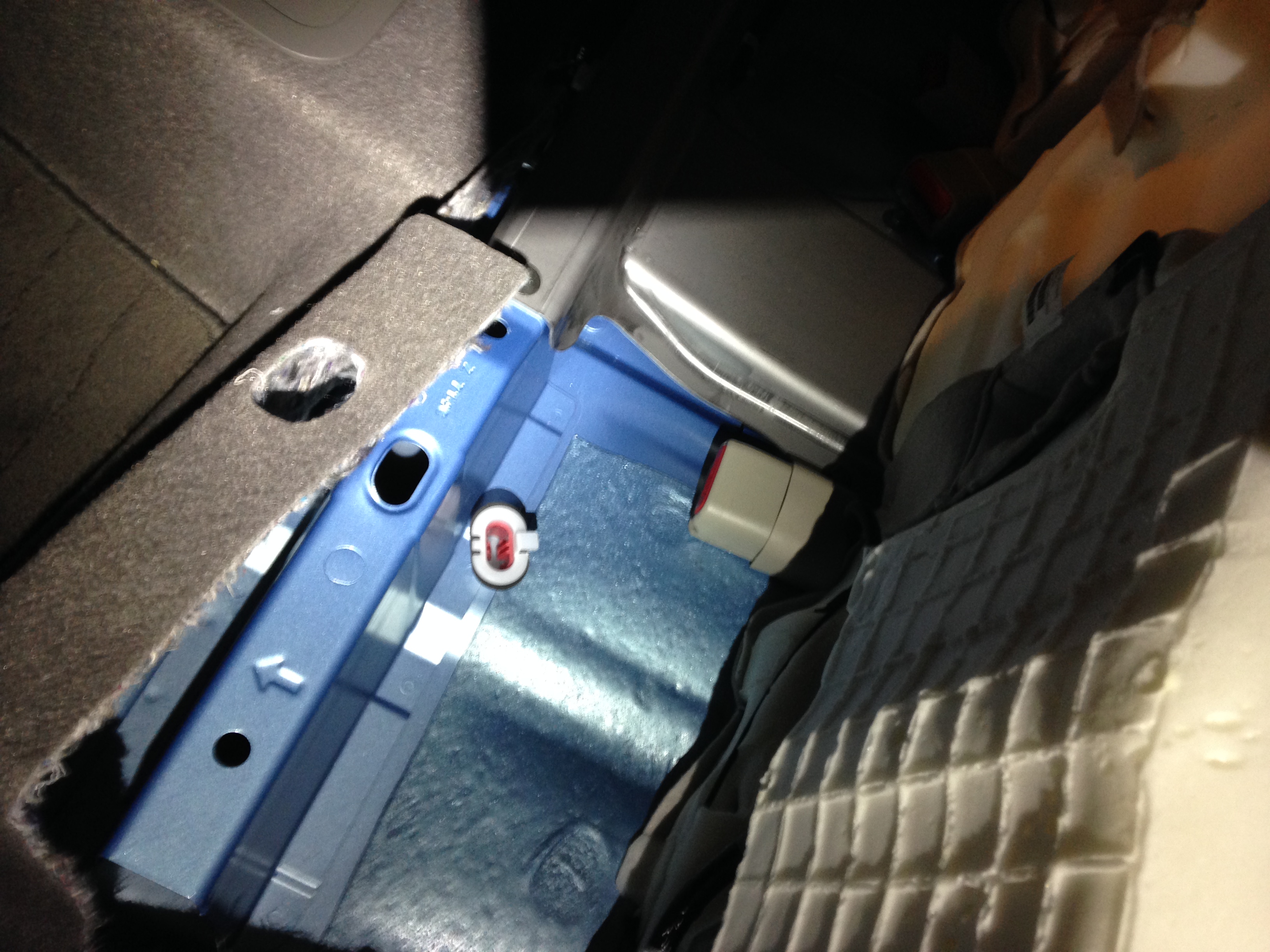 I noticed you're still working with polymers.

What about one of those fork-like clip release tools? It might accomplish the same thing as the rope noose.
Scarlet Ember 2018 Leaf SL W/ Pro Pilot
2009 Vectrix VX-1 W/18 Leaf modules, & 3 EZIP E-bicycles.
BAFX OBDII Dongle
PLEASE don't PM me with Leaf questions. Just post in the topic that seems most appropriate.

LeftieBiker wrote: ↑
Sun Jan 12, 2020 6:41 pm
What about one of those fork-like clip release tools? It might accomplish the same thing as the rope noose.

I found it too tight with too much stuff in the way and I was flying blind. Maybe by looking at the pics someone can devise a tool and/or approach to successfully disengage the clips.
I noticed you're still working with polymers.

Thanks Nubo for your pictures ! Knowing where to pull now I could pull up the seat.

Removed the "bare metal" cover that is under the seat and there is the parking brake cable with equalizer to both cables running to the rear brake drums !

The cables from the rear showed grease and ran smoothly when actuating the brake pedal. Only the inner cable running to the front (to the brake pedal) was not greased.

What surprised me is that the return spring is very weak, you can lift it with only one finger.
I managed to mount the spring so that it pulls a bit stronger.

Not sure if this helps, have to try for a couple of days.

The parking brake not releasing might be a weak spot in this leaf version. When my car was new I occasionally had a "spring noise" coming from behind when i drove about 50 meters after having used the parking brake. Now I think this noise always might have been this return spring acting too late.
After 5 years of use I don't hear this noise anymore, instead the parking brake does not fully release.