Nissan's official recommendation is 80% anywhere EPA didn't intervene.
Also EPA intervention is questionable (what about Tesla's slider, what EPA did with Model S range? which percent was chosen?)
Leaf literally has a tick box Battery Long Life Mode. There are PEOPLE (at dealers for example)
saying a lot of things. But they are nobody in terms of information value.
But that button was made by people who made the car.

Tesla gives an option to choose whatever between 50% and 90%. Jeff told us (and showed data) to choose the low end. End of story.
Can't extrapolate in any way that this doesn't apply to chemistry that degrades faster.
Liquid cooling loop has little to do with shelf life actually (time when vehicle is not used). Tesla hardly cools the battery.
Chemistry is often between 35-50C. No active cooling.

Conclusion: according to what we know, Leaf is not less sensitive to higher SOC degradation compared to Tesla.
Recommendation to charge closer to 50% was not Tesla specific.
And it was given by a person whose information is more valuable/grounded than our opinions combined.

Back in the days when Tesla did not have a slider, owners picked 93% for daily charging and 100% for pre-trip.

It's true that the slider also served to circumvent the EPA rules that affected the Monroney range sticker but I'm trying to not add to the confusion here. The routine use of the slider by most owners is during Supercharger hopping to optimize charging times.

As for Jeff Dahn, when asked this year by a Tesla owner what practice would be ideal for battery longevity he responded 70% for daily charging and 100% for trips. 70% SoC in a LEAF is about 4v

arnis wrote: Conclusion: according to what we know, Leaf is not less sensitive to higher SOC degradation compared to Tesla.
Recommendation to charge closer to 50% was not Tesla specific.
And it was given by a person whose information is more valuable/grounded than our opinions combined.

Where's the factual basis for concluding this? That recommendation was totally based on the Tesla, i.e. your inferences don't count.
If you have any explicit statements where that recommendation applies to any Li ion EV battery, i.e. specifically to the Leaf,
then please provide it!

You conclude this based on what the Leaf's BMS indicates?

You conclude this based on what the Leaf's BMS indicates?

And to clarify, ~ 4v is the average cell voltage

lorenfb wrote:
You conclude this based on what the Leaf's BMS indicates?

And to clarify, ~ 4v is the average cell voltage

So it's possible that the indicated 100% SOC could designed/programmed in the BMS to be at a value less than an
actual 100% SOC for the battery, e.g. chemistry type, used in the Leaf? 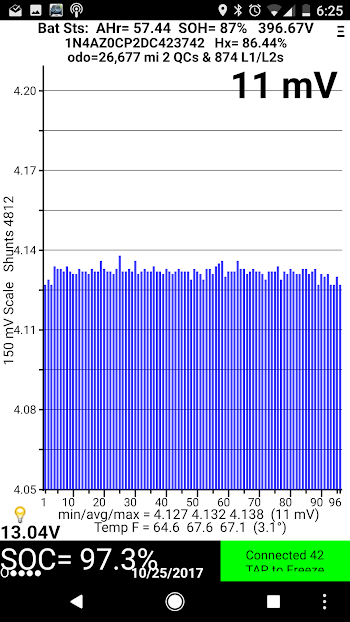 New poster (hey everyone!), but have been lurking for a while. Been really enjoying this thread, so feel obligated to add my data as additional fodder for research/discussion.

Needless to say, there is some pretty serious degradation already given the date of acquisition and mileage, but looks like this isn't an outlier. As has already been observed, age + mileage seem to be a secondary factor regarding degredation. This is a lease, so I'm not torn up over the fact.

Some interesting tidbits I've picked up thus far that may help the community:

1. The car was sitting on the lot for at least a few months before I leased it. When I picked up the car, it already had ~60 L1/L2 charges, with less than 200 miles on the odometer. I saw the dealer plug in the car after my 2 mile test drive (which started at full battery); I believe they always kept it at 100%. The car was not kept under shade at the dealer. Despite that, the car was at a very healthy 100% SOH and 80.6 AHr When I picked it up.

2. I follow the generally accepted guidelines for battery longevity -- as much as I can in the SoCal climate. Charging to ~80%, keeping battery above 20%, and (trying to) keep the battery as cool as possible. Most of my charging was to regain 25-50% of the battery. For the summer months, temp bars were almost always at 6; during the quick charges (which I kept <10 minutes), bars often hit 7 or 8. A couple of times I hit 9 temp bars, but immediately unplugged. Almost all QCs were done at night, where the car was best able to cool down. I have both a covered and uncovered parking space; I use both about equally. I periodically do L1 charges -- which never raise temp. Most of the charges I do are QC (I live right next to a free QC, so I can't resist!)

3. Battery degradation seemed to correspond to ambient temperature more than how I treated it. Despite periods of heavy QC, the periodic heat waves affected SOH and AHr much more severely. The past few weeks the AHr has remained almost at a standstill (changing by about +/-0.1), which aligns conveniently to the more temperate weather we have been blessed with as of late!

I've had leaf spy pro from the start, but there are a few holes in the data (bluetooth hasn't always been enabled to pick up data). Nonetheless, there are enough data points to garner some value. If anyone would like the leafspy data, please let me know and I'll provide!

SageBrush wrote: Judging from this LeafSpy photo, "100%" SoC in a LEAF is about 4.13 volts in a cell

The point is that the actual 100% SOC for the cell used in the Leaf could be at a value of several 100mv higher than the 100% SOC
indicated by the BMS and reported by LeafSpy. So when the BMS has ended charging at the expected 100% SOC, the actual SOC
for the Leaf's type of cell is less than 100% SOC by few 100mv. Which hasn't compromised the Leaf's range as would charging
to just 80% SOC, but reduces the likelihood of causing degradation by actually reaching true 100% SOC. This could easily be
done by using a smart voltage sensing ECU which senses the rate of change of cell voltages as it approaches 100% SOC, and
avoids those higher voltages on subsequent charges, thus avoiding the true 100% SOC.