A while back I was poking around in the cargo area and noticed water under the cargo floor. Removing the cargo 'floor' piece revealed a round black plastic plug, towards the rear and just right of center, a couple of inches in diameter, that seemed to be letting water in from below. Possibly this plug is meant to let water out, should any get into the cargo area. Removing that plug revealed an empty space above the rearmost under-body panel, which the rear bumper attaches to (where a spare tire might go). I explored a bit more to see how water might be getting into that area from below and found that the rear bumper was missing a couple of clips to attach it to the under-body panel, which allowed it to sag down, nearly an inch in places, and act as a scoop for water being kicked up by (for example) the rear tires. At least that was my theory, and I picked up the necessary clips and installed them, which closed the gap nicely.

Fast forward to a few days ago when I had the idea to check under the cargo floor again, having driven through puddles a fair bit earlier in the day. There was still water under the cargo floor, although not as much and more towards the left instead of close to where the round black plastic plug is. I feel like, with the way that the rear bumper overlaps *below* the rearmost under-body panel (instead of above), there could still be some water-scooping effect of that seam. I'm tempted to run some racers tape (leading-edge/helicopter tape) across that seam and repeat the experiment. Wondering if anyone here has any similar experience, with water getting into the area under the cargo floor, and/or theories as to how it might be happening.

While I'm in this area, early on I noticed that just above the rear license plate is just an open space, nearly large enough to insert a hand. The opening faces downward, so is probably safe from rain entering, but it seems odd. Wondering if it's just my Leaf or if others also have this opening.

I can take and post pictures if that will help . . . here is one from the Underneath the Beast thread that shows the area in question from below, with the rearmost under-body panel removed:

Thanks for the reply. I had looked that thread over before making this one; there doesn't seem to be much symptom overlap as I have no moisture in the back seat area . . . that I'm aware of . . . I'll check more closely tomorrow. 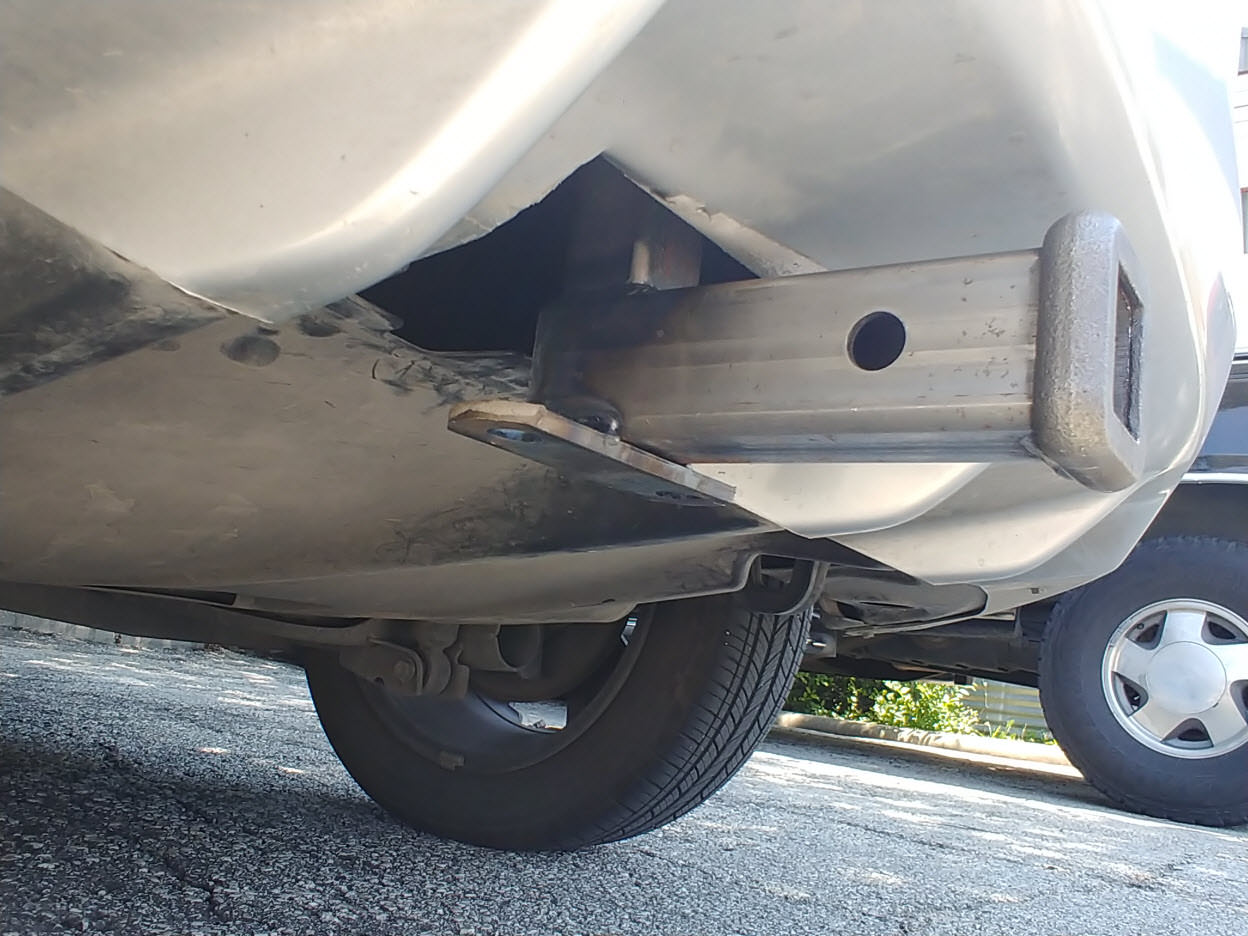 Note how the rear bumper overlaps below the under-body panel, such that water kicked up by the rear tires can get into the seam. It's especially obvious on those downward 'vanes', where in this picture it looks like there's a substantial gap, maybe as much as half an inch.

Wondering if anyone else is seeing water under the cargo floor that might be attributable to this bumper/panel interface.

I don't think that the bumper is 'scooping up' water unless it is damaged and you are driving through standing water. That plugged hole in the cargo area, BTW, is common with many cars. I think it lets paint drain from the area during paint application at the factory. I used it to secure a spare tire (with a J bolt through the grommet) on my 2013.
Scarlet Ember 2018 Leaf SL W/ Pro Pilot
2009 Vectrix VX-1 W/18 Leaf modules, & 3 EZIP E-bicycles.
BAFX OBDII Dongle
PLEASE don't PM me with Leaf questions. Just post in the topic that seems most appropriate.

Did you manage to resolve this issue as I have just noticed the same thing under my cargo area ?

This is still an open question in my mind. I get the impression that spray from the tires hits the little openings formed around the diffuser strakes where they transition from the black lower cover to the rear bumper (white in my case). Those openings are large enough to get part of a pinky finger into. They really should have overlapped that the other way (leading part covering the trailing part).

Now that I have a GoPro camera, I've been considering setting it up in that area in an attempt to confirm water coming in via the mechanism I suspect.

Another action I've contemplated is covering those opening with racers tape. But I'd need to be able to repeat the problem at will (to be sure that fixed it), and it doesn't happen predictably enough for me to have confidence that not seeing moisture in the problem area proves I've fixed it.
Pearl White 2016 Leaf S, 24kWh battery
Silver Enkei Racing RPF1 16x7 Wheels
Ohmmu T12403 LiFePO4 12V Battery
Nissan All-Season Floor Protectors