My 2013 SV front driver side window regulator started making horrible grinding noises a couple of weeks ago. I was pretty sure the regulator was bad, so I ordered a new one. I finally tore into the door today and found that the welds holding the motor assembly completely broke! The assembly was secured to the door by one bolt. That caused the cable to get all kinked up in the pulley. 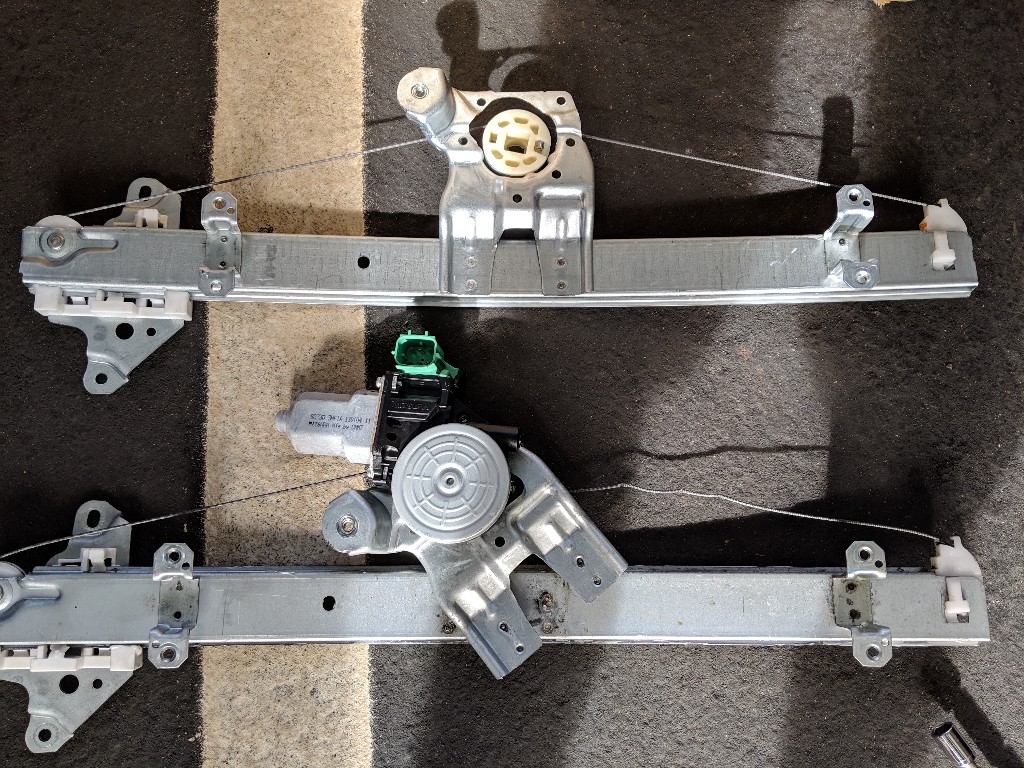 Exactly right! I'm actually surprised I haven't seen any other reports of this failure on this forum or elsewhere.

Those who have the door panel open anyway may want to explore reinforcing those brackets, either with small ss screws or an epoxied-on center brace for each one.
Scarlet Ember 2018 Leaf SL W/ Pro Pilot
2009 Vectrix VX-1 W/18 Leaf modules, & 3 EZIP E-bicycles.
BAFX OBDII Dongle
PLEASE don't PM me with Leaf questions. Just post in the topic that seems most appropriate.

alozzy wrote:Pop rivets would be the easiest thing to reinforce with

kurisu wrote:Exactly right! I'm actually surprised I haven't seen any other reports of this failure on this forum or elsewhere.

Understandable, but it's probably a good indication that the design is "good enough". There are thousands of such design decisions that go into a car. If they chose to over-build in each case, the car would probably weigh and cost double what it does.

I noticed you're still working with polymers.

That's the assumption we'd like to be able to make, but we know enough about design and production failures that prove real-world application sometimes challenges that assumption (Takata airbags ring a bell?).

It could also be my location. I haven't taken my car to the dealer for this kind of repair, but maybe the service department would have reported a higher than normal number of regulator failures. Hawaii air isn't kind to cars and other metal things.

Thinking back, I recall that the window in question always had a lot of lateral movement as the glass moved into and out of the fully closed position (more than the other windows, and definitely once I put in the new regulator). And I recall that right before the grinding noises started, there was a very loud, solitary metal snapping and ringing sound. Putting these two things together, it seems possible that for as long as I've owned the car (I'm the original owner), most of the welds were already failed, and the motor assembly was secured by perhaps even just one weld (and bolt) and had a lot of play. Finally that one weld snapped.

Having the motor assembly fixed to the track definitely makes it a little less messy to take out and reinstall, but it was probably a poor decision to have only one bolt securing it to the door. All of the welds on that regulator look like they're in horrible shape. It was just a matter of time before the whole thing fell apart.

kurisu wrote:...It could also be my location. I haven't taken my car to the dealer for this kind of repair, but maybe the service department would have reported a higher than normal number of regulator failures. Hawaii air isn't kind to cars and other metal things.

That could certainly play into it. Anything that gets into the works and makes the window motor work harder is going to put more stress on the components. I know I've seen a post recently about cleaning and lubricating the window tracks to allow freer movement. Might be something to look into if salt and/or sand is an issue there.
I noticed you're still working with polymers.
Post Reply
Load more posts
10 posts • Page 1 of 1