Opening things up on a Leaf

Opening things up on a Leaf

by hbquikcomjamesl
I'd like very much to add a couple of things to my 2018 Leaf.

First of all, I'm going to be putting in a portable GPS navigator (so as not to disturb the factory radio/CD), and I'd kind of rather set up a dedicated power socket for it, out of the way, ideally in such a way that I can hide most of the cord. I was more-or-less constantly tinkering with my 1978 510, and could have probably taught professional autosound installers a thing or two about opening the dash; I also managed to figure out how to do it on my 1998 Camry. But there's an awful lot more plastic to go around on a Leaf, and a lot fewer exposed screws. Can anybody suggest a good place to look for instructions?

Secondly, I'm in the process of designing a simple indicator circuit, to tell me if I'm powering up with the charging flap ajar (twice now, I've had it pop open on the freeway, at speed, which is most disconcerting (even if the hinges are built like a proverbial masonry privy), and does nothing good to the aerodynamics.
1. Those plastic fasteners holding down the plastic bezel under the flap (and the one under the front edge of hood): how do I undo them non-destructively?
2. Back to the dashboard, how would I get into the little panel to the left of the steering wheel where the flap-release button is?

by LeftieBiker
Try searching "rearrange buttons" as it used to be popular to do just that with the buttons in that panel. It isn't very hard to do, but I strongly recommend that you wait for a hot day, or at least get the car's interior warm for long enough to heat the plastic, to be able to do it more easily. You could also heat it with a hair dryer, or a heat gun (on Low!). You could break that plastic bending it cold.

by hbquikcomjamesl
Regarding the fasteners, at least, I was able to figure them out: they're just another variant on the 2-piece mechanical plastic rivets, albeit not quite as nice as the kind that accept a Phillips screwdriver.

Just insert a small screwdriver or knife blade under the center part, at any of the three gaps around it, and insert a fingernail under one of the other two, and pry up (mainly with the screwdriver.

I found that there was a place I could mount a microswitch so that a closed latch would press down the lever, which is definitely simpler than trying to mount one so that the flap itself would depress the lever if latched.

And I also found a "rearrange buttons" thread. I think I want to pop out one of the blanks even before I have the parts.

And thankfully, I'm in Southern California, where it rarely gets so cold that I'd be likely to crack the plastic.

Just pulled the end off the panel, pulled out a blank button, and replaced the panel. All in a matter of a few minutes. It looks like it would be easy enough to duplicate the blank in clear epoxy. Of course, with my luck, the small amount of mold silicone I still have on hand is probably rancid.

Or I could just buy a spare blank for about $10 (I don't like the idea of doing surgery on the only blank I have on hand), and make an indicator light out of it. Probably worth the $10 bucks not to have to make it from scratch, even if I still have enough mold silicone and it isn't rancid. Probably cost close to $10 just for casting-grade epoxy.

What's the easiest way to get a single wire from the general vicinity of the fusebox and the button-panel to the under-hood area?

I bought a large, rather blunt, plastic yarn-needle, with an eye large enough to accommodate my wire (and pull it through). Only to find that apparent grommet locations didn't line up between what's under the dash and what's under the hood.

Ultimately, I found that I could pass it through a narrow, insulation-filled gap inside the port front fender (above the wheel-well) to the hinge area of the door, and then drill a small hole to get it inside. Since I couldn't easily find a rubber grommet for a 1/4" hole through 1/4" of material, I bought some assorted very short pieces of vacuum hose, and made my own grommet. I'll probably encase the wire in a length of vacuum hose I'll never need again, under the fender and hood, and maybe some foam insulation as well. There's a short segment inside the hinge area of the door, that's exposed when the door is open; I'm thinking of covering it with a piece of Gorilla Tape, painted to match the car color. 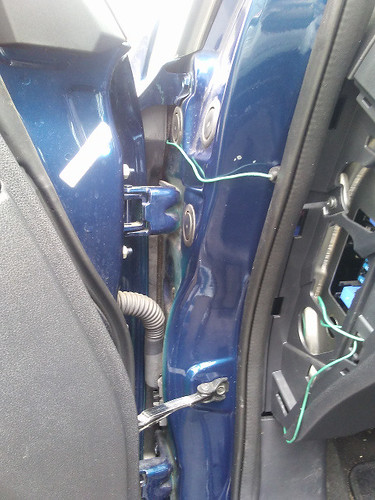 That silly hook on the trunk floor . . .

by hbquikcomjamesl
That silly hook, part 296M3-3NA0A, that holds the bottom of the portable charging station bag:
I see that it's held down with two bolts. Anybody know whether those bolts go into threaded holes, or into nuts?

I just took a few minutes to check. Threaded holes.

Thinking of using the bolt holes as an anchor point for a fixture to hold both the portable charging station bag and a donut.

I'd originally envisioned some assemblage of aluminum angle stock, but now I'm thinking 3/4" plywood, with maybe some aluminum bracing.

And I think I'll build my fixture before I have a donut to hang on it, since it will do a much better job of keeping the portable charging station from sliding around than the factory securing hardware does.
All times are UTC-07:00
Page 1 of 1
Powered by phpBB® Forum Software © phpBB Limited
https://www.phpbb.com/