There has been some discussion, but no definitive thread on the procedure exists yet, so i took some pictures and changed my reduction gear oil. It really is a straight forward procedure almost not requiring this thread, but if you are 50/50 on doing this yourself then this should give you the confidence you need:)

first off, tools
you need a jack to jack up the car
edit: a jack stand to hold your car up while you crawl under it
you need a 10mm socket and a flat head screw driver to pop off the tray under the car
you need a 10mm allen wrench (preferably with 1/2 inch drive) and a breaker bar to loosen the fill and drain plugs.
you need a 13/16" socket to take the driver side wheel off for easier access to the transmission area
you need a 1/2" OD hose and a funnel to fill the transmission with the new fluid.
2 quarts of Matic S or equivalent fluid (i used Redline D6 ATF)
if you want new gaskets for the fill/drain plugs then order those from Nissan. They are metal washers, i reused mine, didn't have a problem.

a screenshot from the FSM, the torque spec for the plugs is 25 ft-lbs 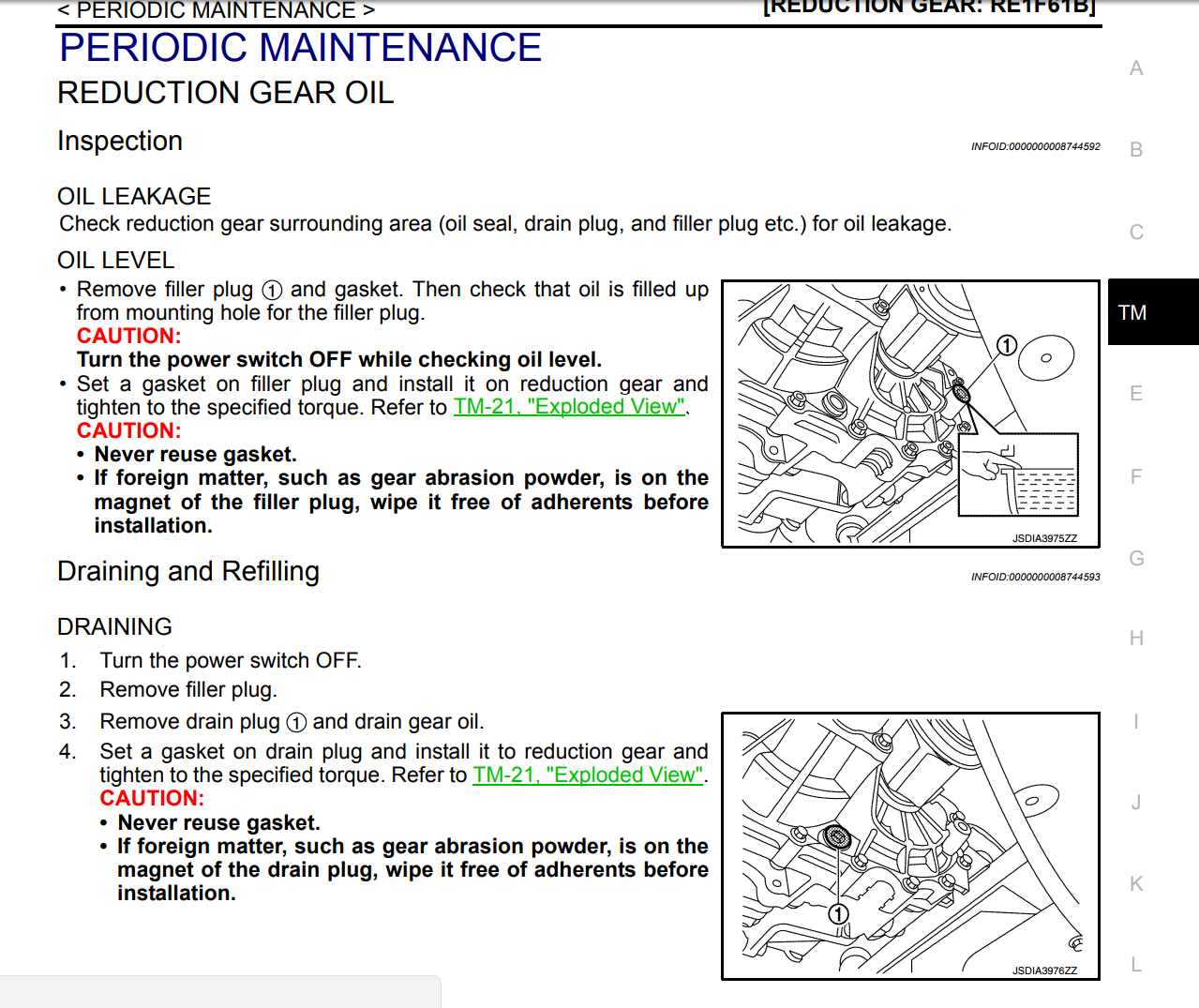 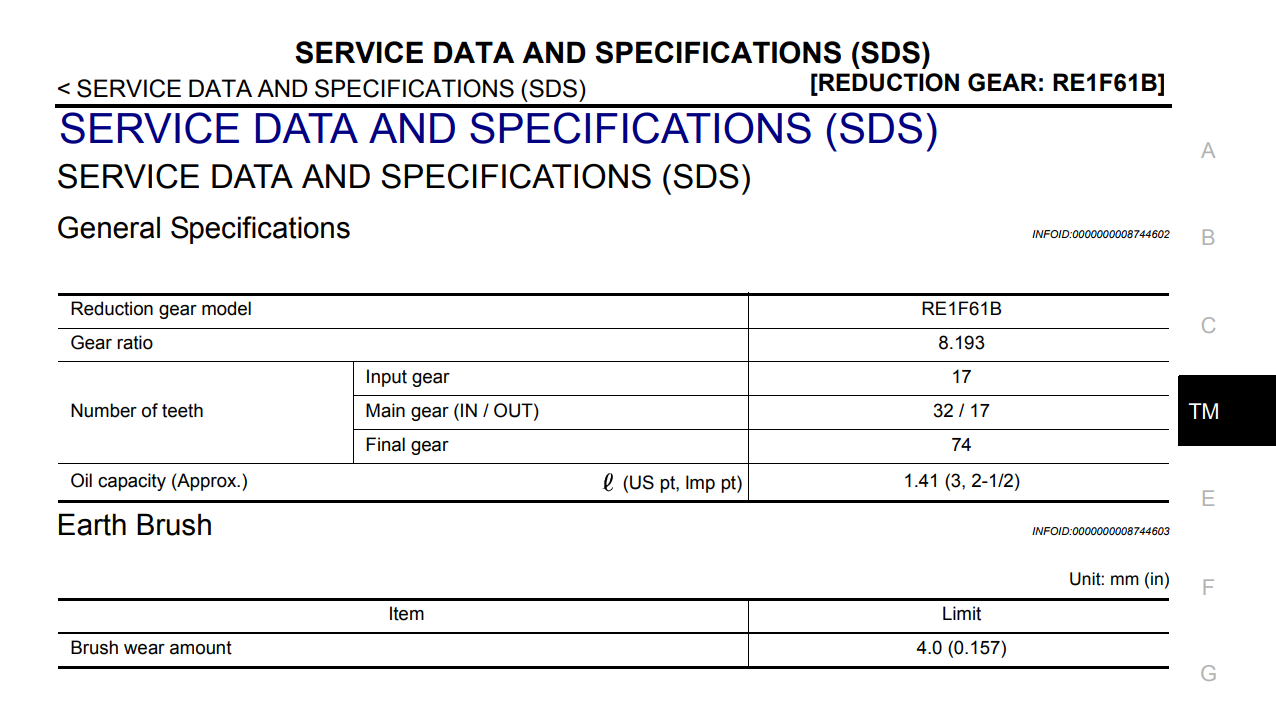 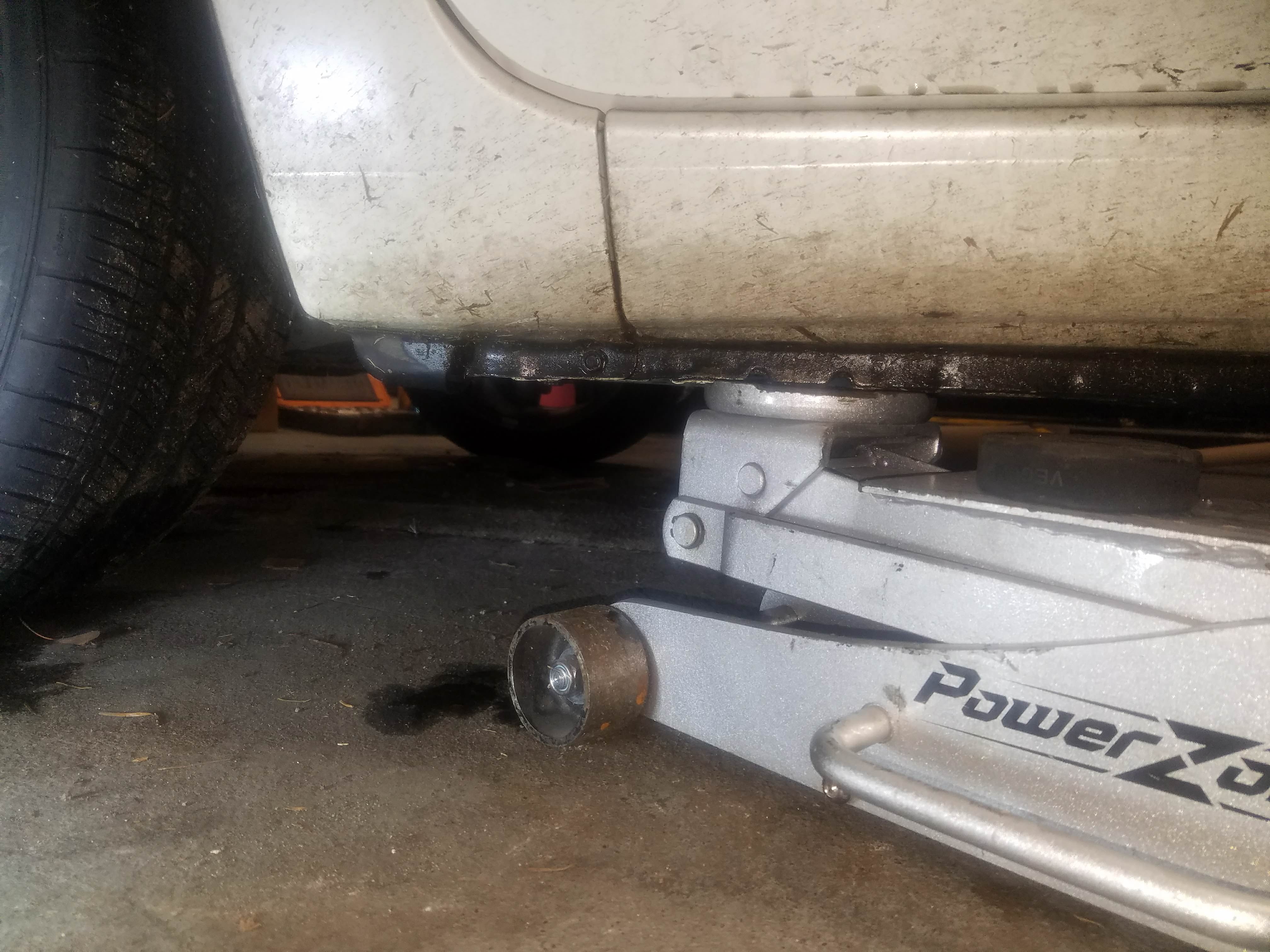 take the undertray off 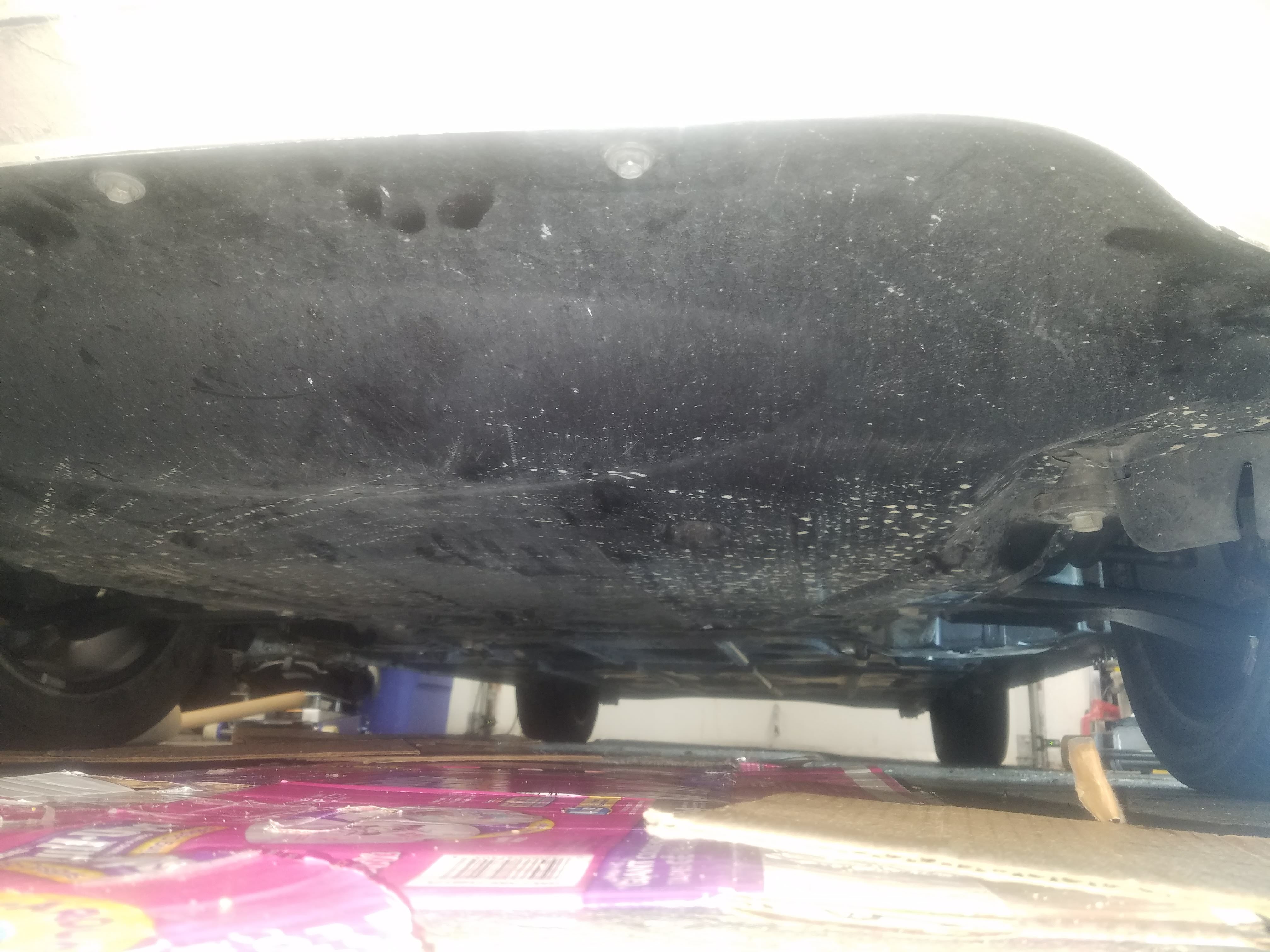 locate the drain and fill plugs, drain plug right below the driver side axle, fill plug to the right of it 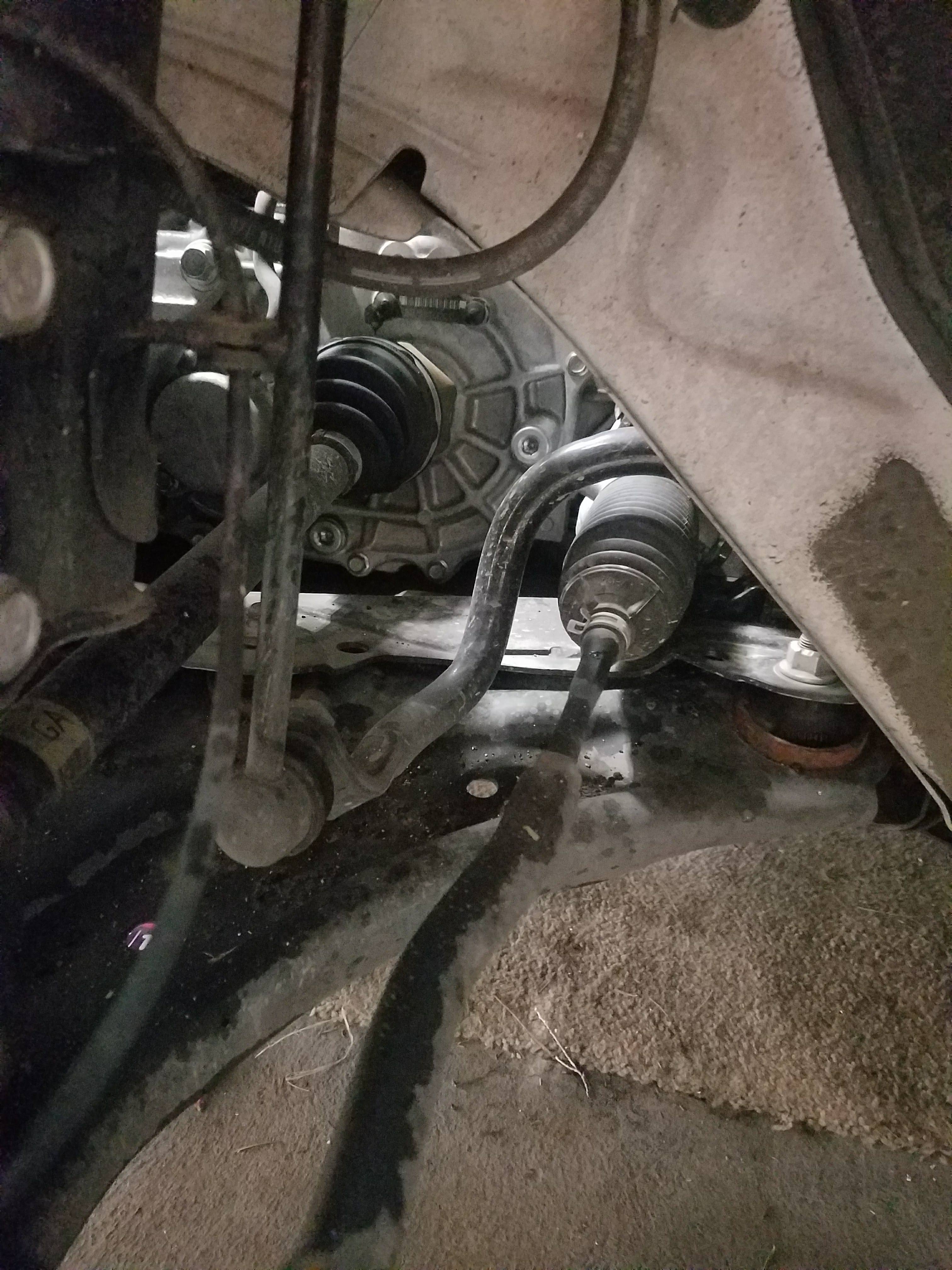 pop them both loose with a 10mm allen, make sure you can remove the fill plug before you remove the drain plug. 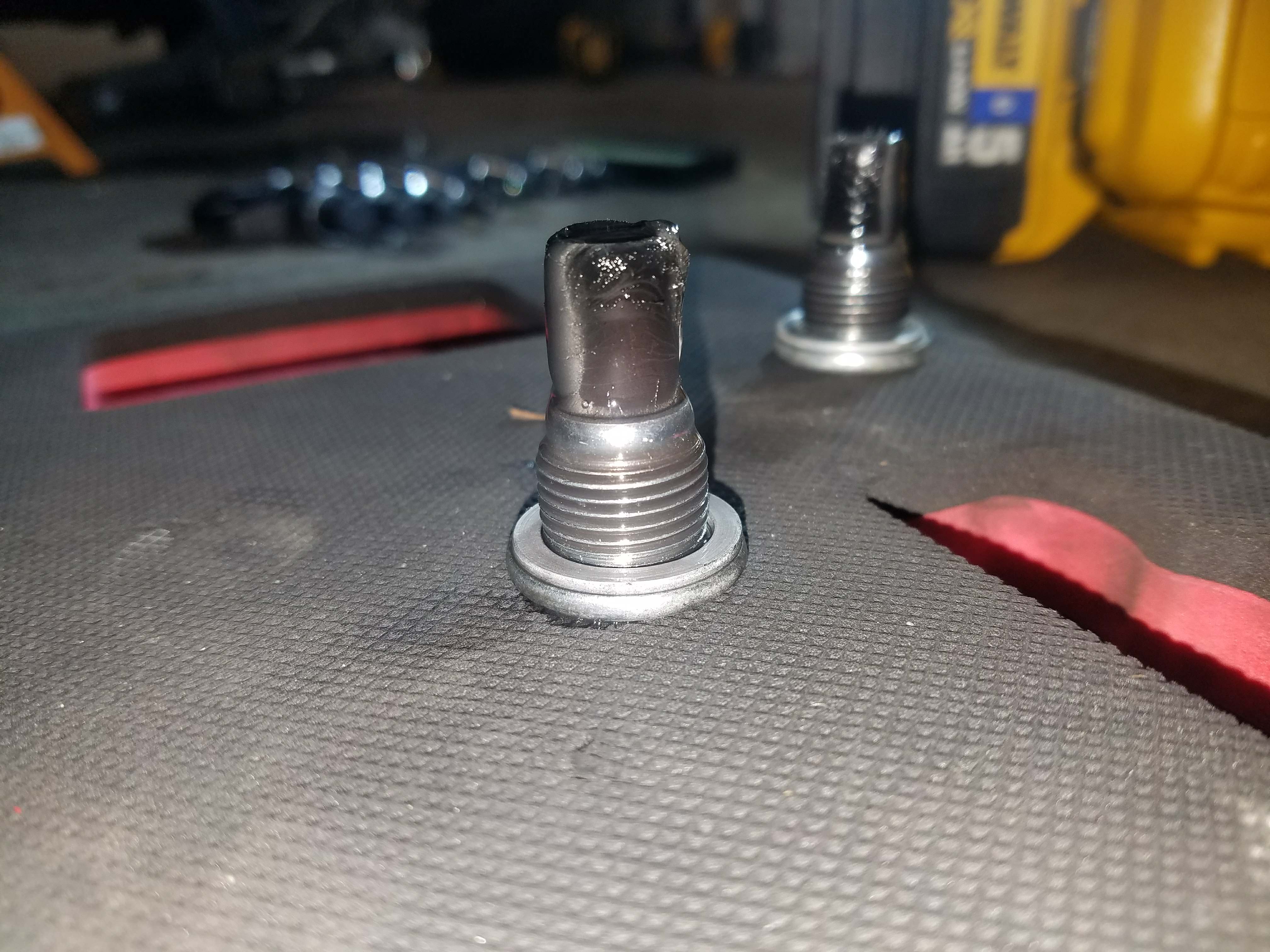 mine had surprisingly little residue on it, i am ok with that. I don't know if the dealer changed the oil after the lessee turned it in but i doubt it. this picture is with 44k miles on the oil supposedly.

the oil itself didn't look Too black when dabbing with a paper towel, but it was dark flowing out when i removed the plug. 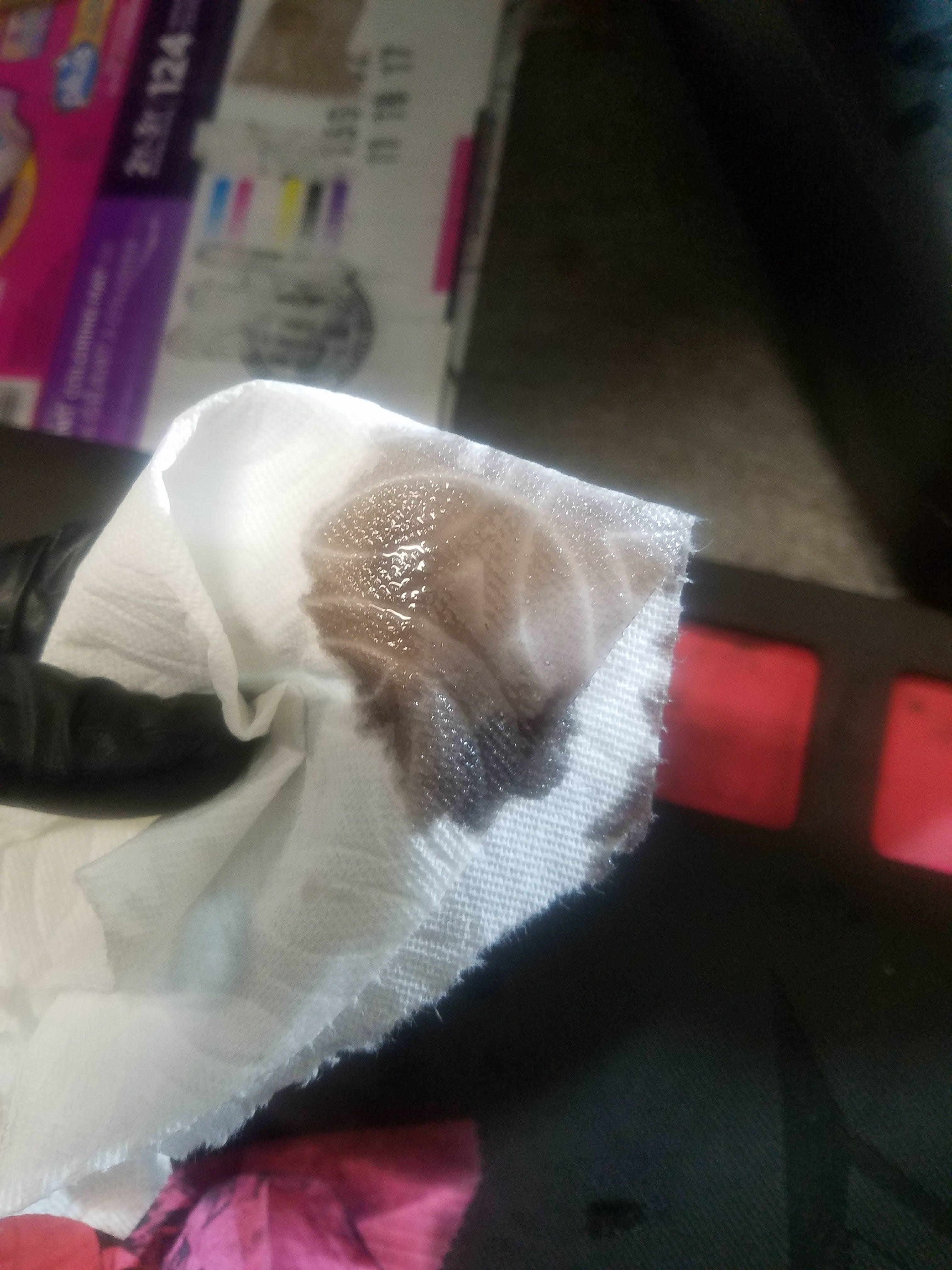 route the tube and funnel into the fill port and put the driver side wheel back on and level the car. put about 1.5 quarts of oil in there until it starts dripping out. Then remove hose, let the oil level out and install the fill plug.
Note: After putting in the fill hose but before filling up, put the driver side wheel back on and lower the car to the ground so it is level. Have an oil pan under the fill hole so that you don't make a mess once the gearbox is full. 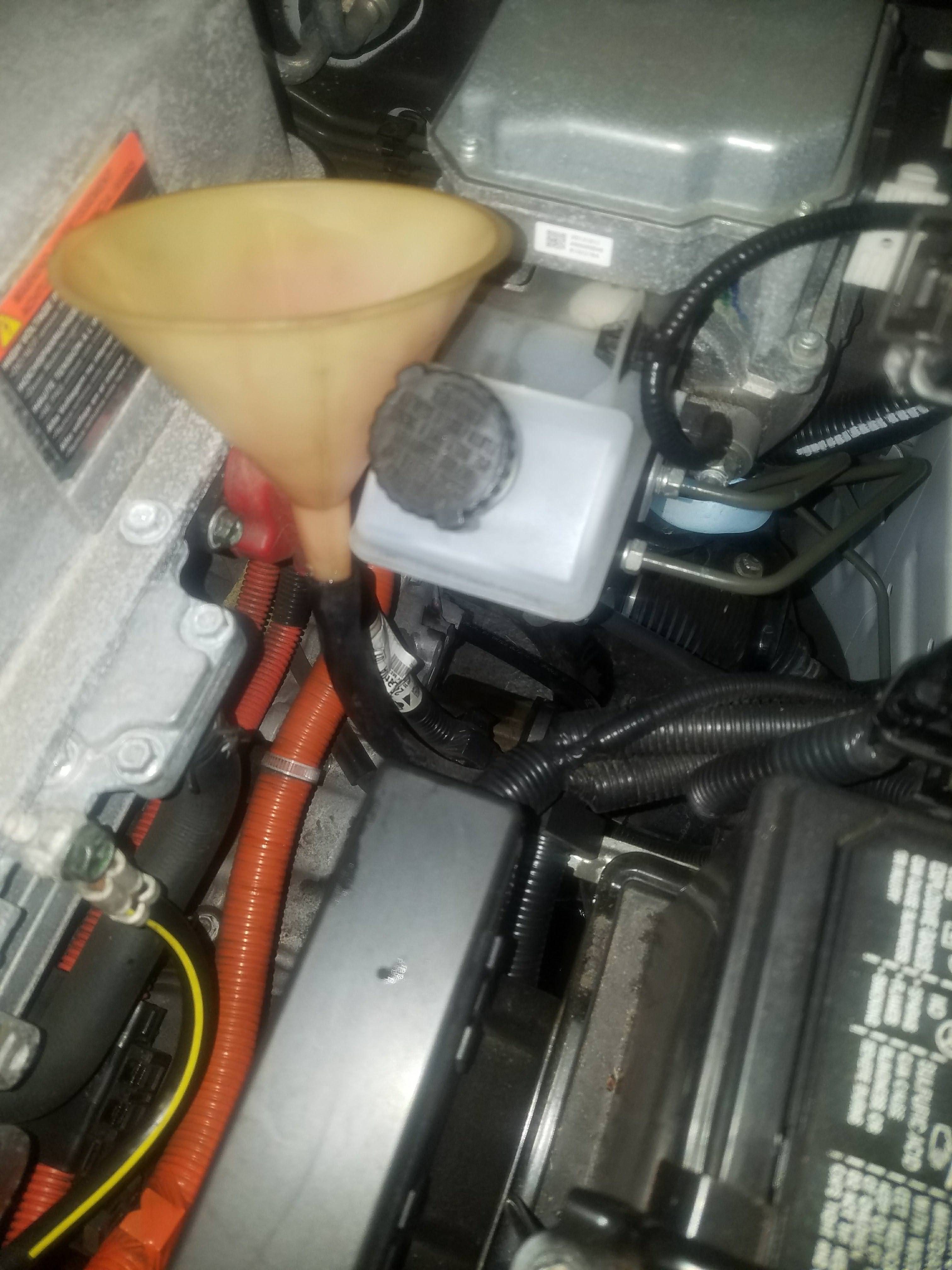 Button up the undertray and go drive around the block. Nothing should appear different if everything went well. Check for leaks after the drive. This took me about 1.5 hours leisurely, including driving around the block afterwards.

If there is a problem with reusing the metal gasket it will likely occur at least a few months from now, in the form of the plug loosening. I'd have used thread lock if I had to reuse the gasket.
Brilliant Silver 2021 Leaf SV40 W/ Pro Pilot & Protection
2009 Vectrix VX-1 W/18 Leaf modules, & 2 lithium E-bicycles.
BAFX OBDII Dongle
PLEASE don't PM me with Leaf questions. Just post in the topic that seems most appropriate.

LeftieBiker wrote:Yes, indeed. Never crawl under a car that's supported only by a jack.

BuckMkII wrote:Um, jack stands? I don't trust getting under a car with any kind of jack alone. Jack stands are real cheap compared to the cost of getting crushed by a 1.5 ton car.

Yes, I have always used jack stands after raising a vehicle with a jack. I recently saw a good reason why: I jacked up one corner of the Leaf with my commercial quality 3-ton floor jack. It held the car briefly and then slowly lowered the car. An internal seal failed without warning so the car settled down. The jack has done its job reliably for 30 years so I ordered a rebuild kit (all rubber parts), but have not yet taken it apart. There was no external leakage and no sign of any problems until this sudden failure after successfully raising the car. There was no external leakage after the failure and the jack will still raise without load, but any load will keep it from raising. Therefore, NEVER trust a hydraulic jack to support a vehicle while working under it.
Gerry
Silver LEAF 2011 SL rear ended (totaled) by in-attentive driver 1/4/2015 at 50,422 miles
Silver LEAF 2015 SL purchased 2/7/2015; traded 8/10/2019 at 82,436 miles
White LEAF 2019 SL Plus purchased 8/10/2019

i did have a jack stand under the front control arm mount too, didn't post a picture of it in place sorry

estomax wrote:i did have a jack stand under the front control arm mount too, didn't post a picture of it in place sorry

I agree that you can re-use the aluminum bolt washers on oil and fluid bolts....

However, I do not agree with the poster who recommends thread locker. You cannot use thread locker on bolts that are for oil pans and fluids because they stay wet... I have NEVER seen an oil or transmission pan bolt loosen. They actually lock up so you have to "crack" them when you remove them again. I could possibly see anti-seize on a differential bolt, that is exposed to rusting..

I was wondering... If you need to fill the oil until the fluid escapes from "fill hole", shouldn't the car be level? Like held up by a total of 4 jack stands, front and back??

yeah the car needs to be level, i put the fill tube in, put the driver's wheel back on, lowered the car to the ground with an oil pan under the fill hole and then filled it until fluid started coming out. then i let it drain level, and jacked it back up and put the bolt in. i edited the first post with that info, good question!

some preliminary results are in over the last 3 weeks of driving and i seem to be settling in at 3.9 miles/kwh vs the 3.7 that i had averaged for the month and a half that i reset before that. Ambient temperatures here in the Seattle area have been about level.

this is obviously not very scientific but there are some single digit efficiency gains possibly to be had by swapping to the redline D6 fluid over stock fluid.