So, it appears that once the motor + electronics breaks the 140F barrier, the cooling system goes from passive (just running the coolant pump in low mode) to more active (running the radiator fans + coolant pump on high). I think I might see where the ULV has the power saving benefit. If it can run the motor (and the gear oil itself) cooler than 140F, then the additional power of the radiator fans + coolant pump on high is not needed. All of those systems use a little chunk of power. The fans eat up +600W of power, the coolant pump (from what I could find online) uses about +150 watts on high mode. So if the motor temperature stays above 140F, you can expect almost +800W of additional power needed to keep it cooling. That's about the same savings of power from using the climate control during a trip provided it's not at the extreme of hot or cold. The efficiency savings of *NOT* using the climate control seems to be very similar to the efficiency savings provided by the ULV.

I was only able to get 171F, gaining elevation on a 70 mph mountain pass climb, at 90F air temperature, kind of a hard slog up.
This tells me Amsoil SS, even though its a bit thicker than Matic S, doesn't seem to make the big aluminum box run hotter.

To be fair, I was running the Leaf hard on purpose, keeping up with the fast lane, in which burst of speed could hit +90 MPH at times before slowing down when coming to more dense traffic.

voltamps wrote: ↑
Thu Jun 17, 2021 10:49 am
This morning, I went out in in 85F weather, 70 mph cruise, not too much uphill this time, and almost matched what knightmb was seeing the other day with some more leisurely driving in 80+ F weather there. Trying to take the different ambient temperatures between knightmb's leisurely runs & my slightly faster, slightly hotter run) into account, the Amsoil SS looks to be about matching Matic S's LeafSpy motor temperature, that's good! I got 135F vs. knightmb's 129F, and the difference can easily be accounted for by the diff driving, ambient temperatures.

I just noticed, looking back at my Blackstone Lab report for the Matic S that came *out* of the Leaf before the ULV was put in a few months ago, the report showed the viscosity hitting 5.67 in the report. I looked back at your chart earlier, *new* Matic S on your chart is 5.2, so just changing out the factory fill Matic S lowers the viscosity already. So there is already a benefit with just changing out the gear oil with identical stuff, minus all the break-in gunk from the gears from the factory. The ULV might just help it along a little further with temperatures, but until I put it back in within a few weeks, I won't know what temperature the motor is operating at. It looks like changing out the gear oil after some time for the gear break will benefit all Leaf owners and with higher quality oils performing better for efficiency. I'm not ready to call it a one and done yet, but it looks like there is a good benefit to doing the change and getting a small, but permanent boost in efficiency (and as you said, less heat, less wear on the life of the parts)

I was able to get the radiator fans to turn on whileL2 charging. Measuring the coolant hose for discharge from the motor (end of the series string of onboard charger, DC-DC converter, inverter, and motor) that returns coolant to the radiator yielded 140 F using the Fluke infrared thermometer. The power stack and motor were all at about the same temperature. The fans just run for a few seconds as a time when the coolant discharge temperature is 140 F so that is probably the threshold. It may be a few degrees hotter the next time I charge so I will try to get more date.
Gerry
Silver LEAF 2011 SL rear ended (totaled) by in-attentive driver 1/4/2015 at 50,422 miles
Silver LEAF 2015 SL purchased 2/7/2015; traded 8/10/2019 at 82,436 miles
White LEAF 2019 SL Plus purchased 8/10/2019

GerryAZ wrote: ↑
Thu Jun 17, 2021 1:41 pm
I was able to get the radiator fans to turn on whileL2 charging. Measuring the coolant hose for discharge from the motor (end of the series string of onboard charger, DC-DC converter, inverter, and motor) that returns coolant to the radiator yielded 140 F using the Fluke infrared thermometer. The power stack and motor were all at about the same temperature. The fans just run for a few seconds as a time when the coolant discharge temperature is 140 F so that is probably the threshold. It may be a few degrees hotter the next time I charge so I will try to get more date.

Thanks for sharing that data, it's quite useful because all I can measure is the expansion tank temperature which lags the others quite a bit. So, it seems 140F is the magic number to kick on the cooling system.
2020 Leaf SL Plus - (Manufacture Date March 2020)
2013 Leaf SV (8 faithful years of service before trade in at 75,679 miles)
Timekoin - The World's Most Energy Efficient Encrypted Digital Currency

Or, like you said, the bit of extra iron particles floating around in there (Blackstone said 120 ppm iron Fe if I recall correctly, which is kinda high, at least compared to what you get in engine oil around 30 ppm) might nudge viscosity up some.

My Amsoil SS (same visc as Redline D6) atf is about 6.3 thick in comparison, & so far I'm not seeing additional heat vs. Matic S. I might chicken out going Ultra-Low-Viscosity (ULV) 4.4 & settle for Idemitsu's MaticS at 5.2 to see if that runs cooler than Amsoil 6.3. 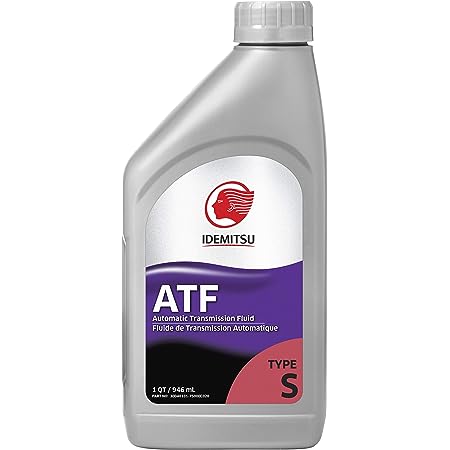 The Matic S spec, like Dexron VI & Mercon LV specs, tells makers to target a "small" range of viscosities for new fluid, and then they all have to survive the battery of tests with their viscosity-index-improver chemicals still intact (VII), reaching a test minimum viscosity from ageing.
2020 Leaf SV - sold - I'll get another EV later...Reserved the irresistible Maverick Hybrid, here in a few months
2016 Ford Focus Electric (traded in at 34k miles, 5 years)

Ok, since I saw an immediately drop in efficiency and had a good week of data to collect, I didn't feel the need to wait another week to see if there was any difference. I went ahead and changed out the gear oil today from the Nissan Matic S back to the Valvoline ULV. The temperature today was similar to my other test day, no wind, EV was already ambient air temperature for everything, so I did another drive around test going the same exact route I always do so I could compare motor and gear oil temperatures again.

I am convinced that once the motor + electronics hits +140F temperature, the cooling system kicks in by running the radiator fans and coolant pump on high. This adds about a +800W additional power drain to the main battery. 800W is tiny compared to how much power it takes to push the Leaf down the road and for short trips, you won't notice much. Since that's the same difference between running the climate control on or off during the trip, it only makes a small difference on short trips.

First thing I noticed, running +50 MPH down the same route. The ULV is already running the gear oil cooler and the motor is staying well under 140F. The Nissan Matic S can do this but the gear oil temperature remains +20F hotter with Matic S. Also, the Nissan Matic S has a point where if you accelerate/stop enough, for the +50 MPH run, the gear oil heat seems to eventually make it to the motor since it is so much hotter than the motor. It will eventually heat the motor up to +140F and it seems to hold between 140F and 142F, which I guess is the cooling system working to get it down, shuts off, more heat is generated, it kicks back on again, repeat.

I'm still waiting on the results from Blackstone Labs before I make any final assessments of running ULV, but so far, everything seems to point to the direction of the ULV is saving energy and enough of it to make a tangible difference on your range and how hot your motor +electronics + gears system is running as a whole. 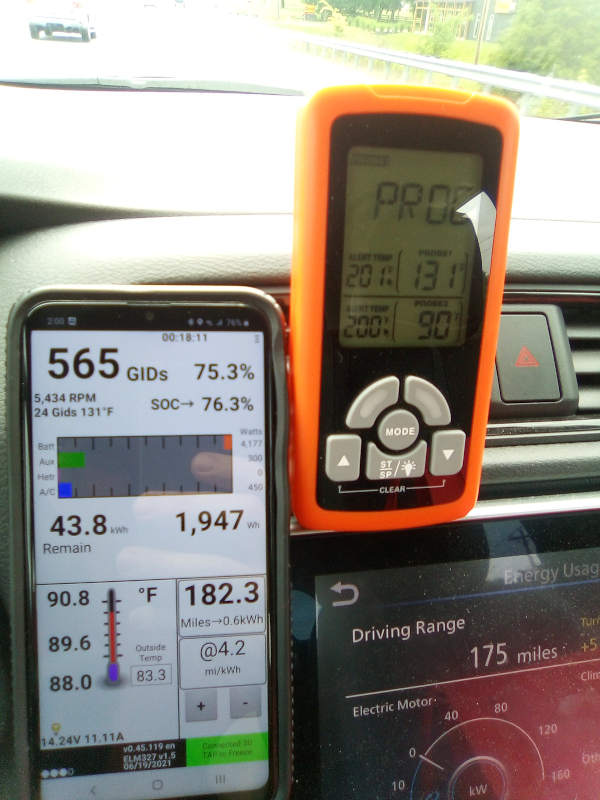 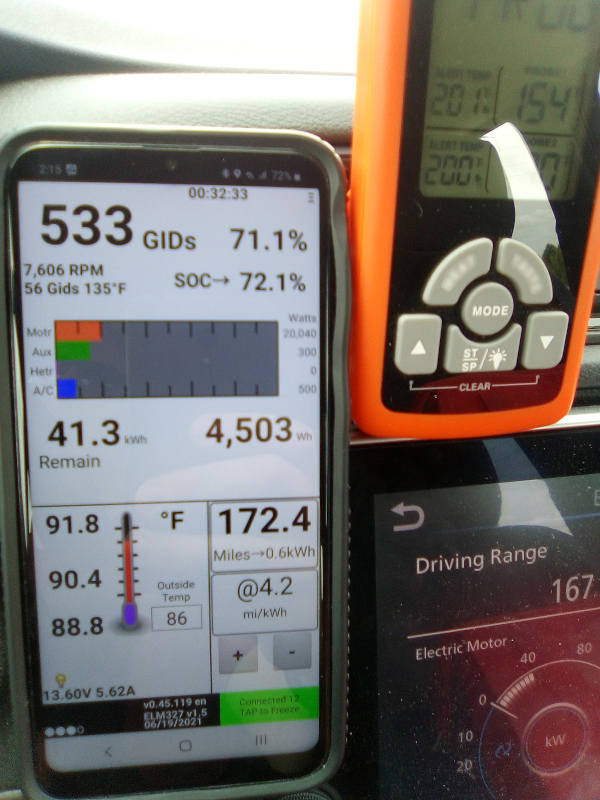 This explains the efficiency boost with the reduced cooling draw. Well done. If the report comes out clean, O am game.to try the ultra low viscosity oil on my S+.

Great write-up, knightmb.
Very cool Valv ULV gets lower gear temperatures. Wonder if Valvoline ULV is doing something to lower the gear surface friction to work with the lower viscosity , as in the chemical film (moly, boron, esters(?)) at the contacts. ..... Anyway, the results are what they are, even though I can't quite see how the "small" visc difference alone accounts for the benefits, both in range & operating temperature.

In my Leaf, I found I can reproduce the LeafSpy motor temperature of 135F arriving at the end of my "standard" 70 mph hiway run to the store. (Amsoil SS thick stuff there now.) .... That gives me a baseline to compare to changing to Valv ULV in the near future. The outside air temperature needs to be close to 85F, easy to get this summer on many days, & near-zero wind of course too is needed to keep the most important variables the same.
How much will that 135F drop using Valv ULV? I can't even guess at the moment.

On Blackstone reports, the big thing is the iron ppm. Take miles and divide by iron ppm to get a Wear Rate approximate figure.
This is what's done on ICE engine oil samples, where the iron ppm (concentration in the oil) naturally builds up over some miles. Toyota engines typically see around 2 ppm per thousand miles, and GM engines get around 3 ppm per thousand miles, something like that, so the Wear Rate depends on what machinery is there, among other variables. But a nice approx understanding can be obtained anyway.
2020 Leaf SV - sold - I'll get another EV later...Reserved the irresistible Maverick Hybrid, here in a few months
2016 Ford Focus Electric (traded in at 34k miles, 5 years)

Yes, preventing the 140F motor temperature (in Leafspy) from tripping the fans & coolant pump from running on high is a real savings. Thanks knightmb for uncovering that.
Not to mention just having cooler electronics & motor for long term durability. Heat is the degradation enemy of electronics.

OK, I'm going to deviate a little from using Valvoline ULV, instead trying the Mustang Mach E's Motorcraft Mercon ULV, only $6.24 per quart at a Ford dealership not far away. It has about the same "ULV" ultra-low-viscosity of kv100 4.5 vs. Valv ULV's 4.4, so I'm considering it the same.

Goal: If I can get my standard-route 70 mph run up the local highway down to an ending motor temperature of less than 135F, and I'll consider anything less than 130F to be a "win", then the experiment will essentially corroborate knightmb's finding (so far) that lower visc ATF helps a lot.
2020 Leaf SV - sold - I'll get another EV later...Reserved the irresistible Maverick Hybrid, here in a few months
2016 Ford Focus Electric (traded in at 34k miles, 5 years)
Post Reply
Load more posts
222 posts