I'm happy to report a successful pairing with my OBDII device and a Samsung Galaxy phone (sorry I don't have the specs on both, I'm not with the car or phone right now). Thanks to Turbo3 and everyone else who have worked to perfect this, I think by far this is the best method of gathering data from our cars inexpensively, and I appreciate the effort from everyone on the forum.
I would be happy to participate in any data gathering project that is underway (it sounds like the easiest way to do this would be an opt-in "send data" option on the next version of the Android app, and then we all agree to send on particular trips or days).
I eagerly await the EV Can mod on the app (which I know requires a physical mod, too). 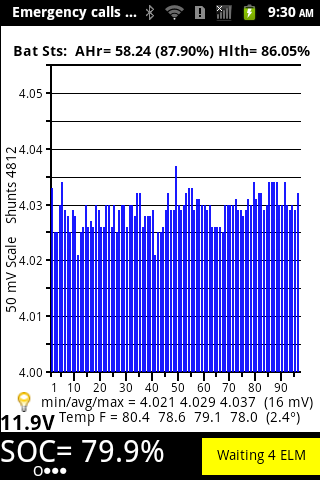 Thanks Jim..
Jim and I have also been looking at the temperature data from the car trying to get our software (for both LeafDD and the ELM Leaf battery app) to be as accurate as possible. The car reports only the raw thermistor value from the A/D which is a non-linear log scale, and it's own calculation of the temperature in whole degrees C. Since we'd like to provide more precision than just 1.0C or 1.8F, we look at the raw thermistor A/D value and try to calculate it ourselves. It seems the car is not using a look up table but rather a few linear approximations. All of the raw data recorded thusfar is documented in the "Active CAN sampling" thread. The existing (but soon to be updated) version of the Leaf battery app uses the following equation:
TempF = 162-(raw*0.181)
This works well in the mid range but as the temperature rises the thermistor values get closer and closer.
Based on the correct data observed so far, here is a simple conversion table for temperatures mentioned on MNL using the older battery app software..

how to we get
new Health value? so we need to download the app again?

thanks for doing all of this. it has been wonderful to monitor the car. still at 61 AHr but looks like we have full use of 21.5 kWH. drove 68 miles after full charge and had 24 miles left on the car

how to we get
new Health value? so we need to download the app again?

thanks for doing all of this. it has been wonderful to monitor the car. still at 61 AHr but looks like we have full use of 21.5 kWH. drove 68 miles after full charge and had 24 miles left on the car

This is a Beta test app. Go to bottom of settings panel and select "Look for Beta Version".

You will need to email me at WattsLeft.meter@gmail.com if you don't already have the passcode.

Re: app not exiting in a timely fashion.

While driving around this weekend (350+ miles) I used an unmodified ELM327. The app would start and stop readily every time, even on my morning commute today. After I got to work, I tried it again with no ELM327 nearby and the first time it worked fine, but the second time it hung. The first time I had the app open for about 3 seconds before I exited and the second time I had it open for about 10 seconds ( I noticed that “waiting for ELM” flashed red briefly). Third time, I waited 15 seconds and it also exited (but it had two red flashes and the second was much shorter). I tried a dozen more times at various time delays and it hung every time. On these later attempts, I stopped seeing the red flash.

Next, I’ll try to see if my installation of the app was the problem. I plan to clear my application data, uninstall the program, reset my Galaxy S2 to factory defaults, sideload v0.25, and try again.

By the way, Turbo3 says that his program data was 12kb, mine is only 8kb. Anyone know if that is normal?

Question for the Samsung Galaxy S4 users out there...

I plugged the BAFX into a friends Porsche and fired up Torque and it worked perfectly. Most of the green data LEDs were flashing as if data was being actively transmitted from the adapter to the Galaxy. So, I know the BAFX adapter works, the bluetooth connection works and the Torque app on the Galaxy works.

For the LEAF, it just appears as if it's not transmitting any data.


One thing I'm going to try in a bit is to see if I can attach the BAFX to the LEAF and run Torque. I don't know how many of the LEAF codes Torque will understand, but I can at least see if another app can inspire the LEAF to transmit data.

Update: Unlike the LEAF battery app, Torque inspired the BAFX data transfer LEDs to blink, but Torque indicates it is not able to talk to the vehicle ECU. From reading other posts, it looks like Torque doesn't understand what the ECU is transmitting, but it, at least, got the BAFX LEDs to blink.
2013 Crystal Red Volt
2012 SV Glacier Pearl LEAF; turned in 5/12/2015:18.6K Miles:50.13 AHr:10 bars, 24% gone
Post Reply
Load more posts
2385 posts