I've been working for over 10+ hours with the CAN database files. I recently stumbled upon new information, and can finally solve 60% of the EV-CAN with this information. I am uploading all my findings to GitHub, so anyone wanting to take it into use will have an excellent starting point. 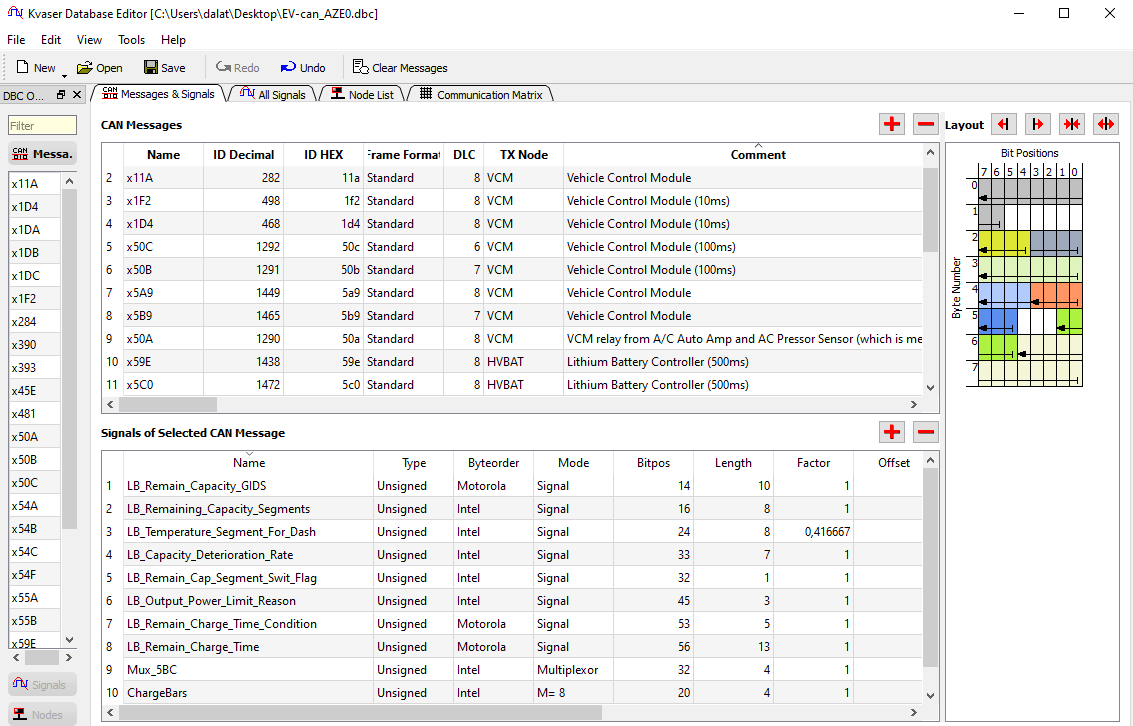 Great work, Dala! Thank you for sharing these efforts publicly.

Hi everyone, I am wondering has anybody had any success in communicating directly with the PDM in a 2015 vintage leaf.
I have removed a unit from a wrecked car. I have it set up on the bench and connected all the connections I believe I need thru the B24 connector. I have powered the unit up with out a battery load and I have measured a 5 volt signal on the battery connections. I presume this test signal out to the connector to see if teh battery is there. A short burst of data is sent out over the can bus at the same time. I have connected a test battery load to it in the 340 volt range and it does not change any of the start up conditions. Changing the inputs on the B24 connector does not initiate any new messages over the can bus. The two messages are as follows, grabbed using a DigiView D9:
SOF SOF
BASEID 30C
FRAME TYPE DATA
DLC 4
DATA 0
DATA 20
DATA 0
DATA 81
FORMERROR CRC-D
NAK N
FORMERROR EOF

This message is sent a number of times and followed by :

Also sent a number of times.

I am going to be setting up packet sniffing on a working leaf to try and figure out the messaging. I realize I have to pick this particular data on the EV SYSTEM CAN not the CAN Communications circuit.
My hope is to move the Battery and charging system into a 2002 Toyota RAV4 EV replacing the NIMH pack and charger with as little of the leaf system going with it as possible. I am going to attempt to spoof the RAV4 EV into thinking it still has the NIMH pack.
The leaf pack looks like it will be content to operate independently,
First step is to get both the pack and charger working independent of the VCM and the rest of the car.

Any insights in how to communicate with the charger appreciated.

If anyone wants my codes for the program or help with making the charger "think" its in a leaf just contact me!

I would like to get a copy of your code, the forum will not let me message you as I am new on the forum perhaps you can send me a pm.

I am trying to get a PDM from a 2015 leaf to run stand alone with an original battery pack for a 2002 RAV4 EV.
I just posted the details any help appreciated.
With thanks, Peter
Peter
Dangerous if left unattended.
1985 Grumman Olsen Kubvan, 2002 Rav4 EV, 2000 Ford Ranger EV, 2015 Nissan leaf, Biktrix LJ

Any success with this seems like a few people have tried and stalled. I am just starting on project I have wrecked car and a functioning car to play with.
Perhaps thi work should be a new thread.
[/quote]

I'm trying to start the charger. On a block of charges, the LED indicates that the charge is running, but there is no current on the batteries. Do you have success?
[/quote]
Peter
Dangerous if left unattended.
1985 Grumman Olsen Kubvan, 2002 Rav4 EV, 2000 Ford Ranger EV, 2015 Nissan leaf, Biktrix LJ


Jimma Hanna's video on getting the DC-DC converter working: https://www.youtube.com/watch?v=BMhcHkOg-Mk

@Tremelune Broken Link! Any chance its still up but moved?

I think I found the video inside another very long one
This link jumps to his part: https://youtu.be/ipEzK1yzxHY?t=6424

I predict this to be a bit more difficult than the inverter, but we'll see.

Hi Celeron55, did you have any further success with the charger.

Let me know or chime in on the thread if you can.

I an going to be hooking up all the modules VCM, BCM, PDM that I have removed for the wrecked leaf. I do not have a working inverter and the BMS is still in the pack. I am going to monitor the EVCAN System bus while trying to initiate a charge. So far I have only run the PDM stand alone it sends a couple of messages repeatedly when i plug in the charger and that is it. I guess it is waiting for a response from another system.
Peter
Dangerous if left unattended.
1985 Grumman Olsen Kubvan, 2002 Rav4 EV, 2000 Ford Ranger EV, 2015 Nissan leaf, Biktrix LJ

Is somebody working on a 2020 leaf? I just started to work on it yesterday using the dbc file done by Dala. I am plugged on the HV CAN somewhere in a connector (nothing execpt on request on the OBDII). I have already found and corrected some differences between the older version and the new version, but if somebody already works on it, it could be fine to share our constatations.

I'm not working on a gen5 (62kWh) Leaf as I have no access to any, but we are trying to fix a few lingering DTCs in a gen5 pack for which a few EV-CAN traces from a functional 2020 Leaf would be helpful. If you're willing to share, I'm all ears!