How long 'til 4th bar drops?

swooshrc wrote:Mine dropped on May 31st. I wanted to wait until the end of the summer before getting replacement so drove it for over two months with 8 bars. I dropped it off at the Dealership last week. Approved. (Multiple Nissan owner, purchased Leaf 2 years ago with 36K miles)

No other data available. I joined forum due to 4th bar loss.

If you don't mind, can you get Leaf Spy and pull your Ah, SOH, and Hx values off of it so we can have it for statistical information? (Along with year model if you don't mind.)
Pulled the trigger on going EV on 10/2016 with a 2012 Leaf SL, traded it in and now I'm a very happy Tesla Model 3 owner. Reservations for Tesla Model Y and Cyber Truck.

I'm assuming, based on what I have read, that I'm just weeks from dropping the 4th bar?

drees wrote:Everything that I can see shows that SOH is current AHr / 66.25 and calculated in LeafSpy. 66.25 AHr is the assumed capacity of a new battery.

FWIW, Turbo3 said that SOH is read directly from the car.
(The car may be calculating it based on the number reported in Ahr, but LeafSpy reads SOH directly.)

I bought a 2012 with 37000 miles and 9 bars back in June. Took it to dealer and found out warranty will expire on October 10. LeafSpy shows SOH T 67% and 44.45 AHr. Been quick charging once a day for the past few weeks but not much change. Really hope I'll get to 8 bars before warranty expires.

cyberyeh wrote:I bought a 2012 with 37000 miles and 9 bars back in June. Took it to dealer and found out warranty will expire on October 10. LeafSpy shows SOH T 67% and 44.45 AHr. Been quick charging once a day for the past few weeks but not much change. Really hope I'll get to 8 bars before warranty expires.

I don't think there's any way you'll make it, I'm afraid. The highest reported Ahr at 9-bar drop for 2011/2012 is 43.56 Ahr; dropping nearly 1 Ahr in under 30 days seems pretty unlikely.
(I'd be curious to know how your LeafSpy readings changed with quick charging; my own experience with moderate quick charging is that it temporarily raises the Ahr values, and though they eventually drop again, I didn't return to my previous decline trajectory; IOWs the net effect for my car seems to be a delay in reaching lower Ahr values. But, others disagree on this effect.) FWIW, I'm at 43.65Ahr on my 2012, and I have doubts about failure before my February expiration.
OTOH if you got a car which was "reset," there have been reports of very quick and dramatic drops as the BMS recalibrates itself fairly quickly.
My best suggestion would be to look at your readings since June, and extrapolate from there, to see where you're likely to be at in October. if it's in the 44's, no way.
On the upside, there have been several reports of Nissan doing out of warranty replacements with some degree of cost sharing.
2012 SL from TX, (mfg 8/12), used, dropped to 8 bars at 43.50 Ahr, 40,601 miles. my daily stats =/= my collected data on 4-bar losers

You are right, my AHr actually rises after quick charging, and hasn't really changed much since June. I was very careful when I first got the car, always in the garage away from heat and only charge at home at night. Just started quick charging last month. Will call Nissan to find out if they will do any cost sharing if warranty expires. I sure hope they will because 40 miles per charge it's hard to work with.

My 2012 LEAF is killing me. Warranty is up Feb 1. I had been on a fairly steady downhill path, which extrapolated to a new battery, all things being equal. Then a quick charge session bumped me way up, followed by a fairly nice precipitous decline, then a rise, another decline which edged into 4-bar-loss territory, and now on to another rise - back to pretty much where I was 30 days ago. :/ 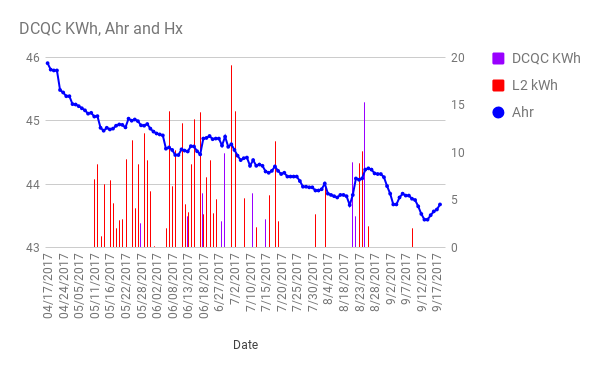 I don't understand what's suddenly causing my numbers to, in the immortal words of The Smiths, oscillate wildly.

My suggestion is to ship it (or drive it if you've got enough miles) to AZ or FL for the winter.