How long 'til 4th bar drops?

Yep. I wonder, does anyone have daily leafspy stats for a cold winter? Curious to know what to expect. I've seen daily graphs for happy CA cars but nothing from the frozen North.

Apologies for all the drama along the way.

We had 3 unseasonably hot days here in MN, around 90F or above. I had my hopes, but that Ahr value just wouldn't move down - in fact it moved up a little during these hot days. Extreme frustration. But then tonight, on the way back home, I saw 8 bars. I don't think it had dropped much before I noticed, but at any rate my values were just not moving much over the past few days so these should be about right:

Battery temp when it dropped was around 95F, and 89F ambient at the time. (Values edged up slightly by the time I took this pic). 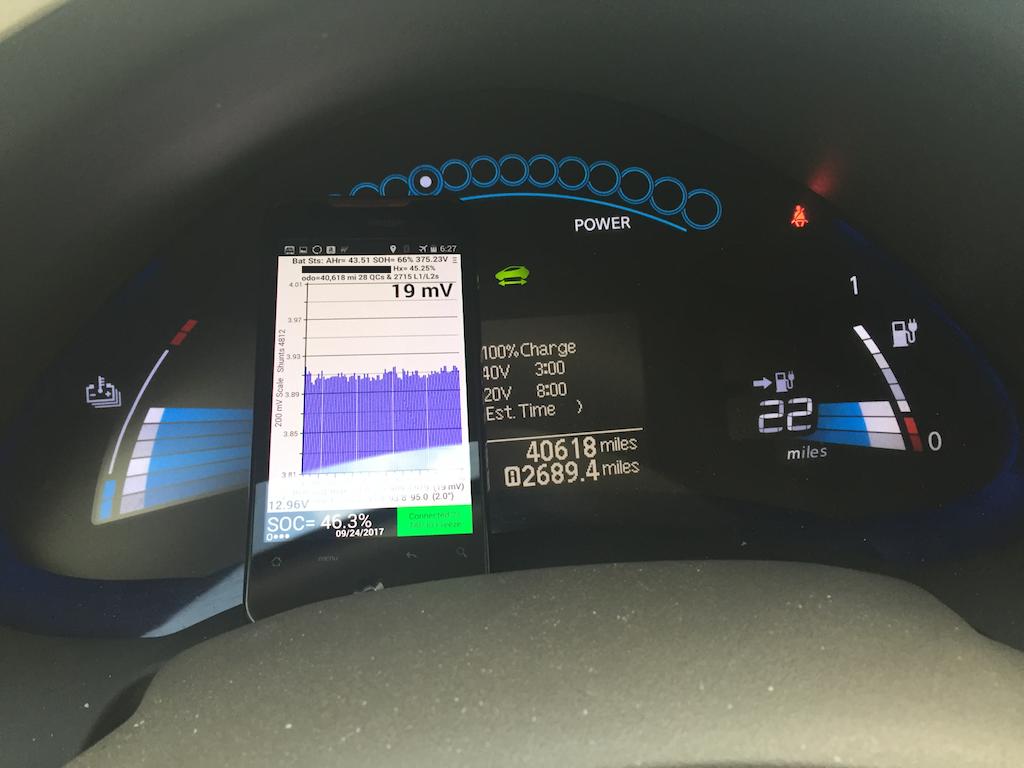 Reddy wrote:Congratulations! You're one person who is happy (currently) with global warming.

The Leaf is currently at the dealer getting the new battery pack installed. Here is a photo of the pack before it was installed in the car.

The Leaf is currently at the dealer getting the new battery pack installed. Here is a photo of the pack before it was installed in the car.

baustin wrote:I went out and checked my Leaf again today. I think the 4th bar should have dropped by now, but it is still holding on.

The vehicle was manufactured in January 2013, spent it first two years in Georgia, was auctioned after lease return and brought to Las Vegas. I got it in March 2015. It dropped the first bar in October 2015, the second bar in June 2016, and the third bar in November 2016.

That's what worries me for mine - we have lots of data about when people did lose the 9th bar, but not a lot of data for those with 9 bars still holding on. I wonder how many low Ahr batteries still have 9 bars ...

Hi all, I am new here and would appreciate input from this experienced crowd. I am considering purchasing a 2013 SL w/ Bose currently at 32,300 miles and 9 bars. I don't know the exact month the warranty expires. The owner, who works for a Nissan dealer, said a little less than a year (I can get more detail). I live in Phoenix, though it's now "winter" (i.e. in the 80's and 70's vs. the 100's). Is it worth the risk to spend about $9k and hope it drops to 8 bars?
Post Reply
Load more posts
517 posts