redLEAF wrote:AW speculated like others than it would retail around $45K but not sure how much more the range extender model would cost but with a total range of 186 miles it's not bad.

New i3 video on the safety of the batteries:

Caught being tested in NY ... interestingly enough, a current LEAF owner posted that an i3 is in their sites as a possible next car ... always amazes me them adding this camo wrap as it can't hide the shape very well and actually draws more attention to it, spotted close to BMW's NJ HQ

I responded to a PluginCars article on BMW taking over the EV world!!!!

"cnuoffer" said, "BMW has been leasing (for trials) EV's in the US for years, first with the Mini-E and now with the ActiveE."

Perhaps you are "ignorant" (as you claim the author is) as to how those trials you referenced are going, particularly in the current BMW ActiveE program. From such a small fleet of closed end lease cars, many have spent weeks in the shop for new motors and battery replacements. Pretty much ALL the major hardware parts of an EV.

Dead cars that won't start. Stranded drivers. The ActiveE is supposed to be the technology and hardware to be used in the i3. So far, BMW doesn't have a product that is "ready for prime time" with relation to EV's.

I'm confident they will do their best, but this bravado from BMW's Mr. Robertson doesn't give me "warm fuzzies". Nissan is currently the world leader in EV sales, and they still missed the mark by selling cars without temperature management control for the batteries in places like Phoenix, Arizona. Yes, someday, maybe even soon, Nissan will have more heat tolerant batteries, but for now they don't. Otherwise, the Nissan LEAF is rock solid.

The actual range of a BMW i3 under electric battery power may only be marginally better than the LEAF. Unfortunately, the EPA used an average range value on only the LEAF (and Rav4 EV), making it difficult for the average consumer to compare to cars that don't use averaging. The Tesla Model S, for instance, does not use this averaging to achieve 265 and 208 miles on their two current models.

The 2013 LEAF, tested under the same 5 cycle test as other 2013 EV cars, is rated at 84 miles of range at 100% charge (and 66 miles at 80%, for a 75 EPA average). I'm confident that the BMW may get more than 84 miles, but not by much. When you throw in the optional several hundred pounds (100kg) of auxiliary oil burner engine, things may not be that far apart in "actual" battery range between the two.

The BMW i3 should be about 250kg/600lbs lighter than a LEAF without the optional 650cc BMW motorcycle engine/generator, but may have a slightly smaller battery (unfortunately, another area in the EV world that is difficult to compare without regulation) than a Nissan LEAF.

No discussion of the i3 is complete with the issue of how to extend range when "out in the wild". Nissan offers the CHAdeMO quick charge system, which is one universal standard throughout the world with almost 3000 installed, and growing fast. BMW will offer only a new style plug that currently has near zero public installed stations in the world, and has yet to really launch at all.

While some will claim that this is the same way Nissan started with the LEAF. What is different today is that now there is a well established LEAF (25,000 USA, 62,000 worldwide) and its DC quick charge network to compete against. LEAF had no competition (well, the Mitsubishi iMiev, but that never did catch on in the USA).

In addition, that new system has no manufacturer throwing money at it to ensure it's mass adoption. The established DC quick charge standards, Tesla and CHAdeMO, have their respective companies, Tesla and Nissan, pushing hard and spending big bucks to build it in the USA and the world. Tesla will even offer a CHAdeMO adapter for their cars sold in Japan.

Secondly, the new system proposed by BMW and their consortium is not the same standard in Europe as it is in the USA. Thirdly, BMW is currently the only member of the consortium to actively pursue mass production of EV's.

So, BMW offers a petrol burning auxiliary motor to extend range. For folks coming from an existing BMW petrol or diesel car, this may seem perfectly acceptable and logical. For folks who don't wish to burn oil, it may be more troublesome.

The BMW i3 currently has no competition in the "performance" handling, $40k-$50k electric vehicle market, nor is any on the horizon. BMW certainly knows who is likely to buy this car, and I suspect that the BMW will be well marketed to that demographic. The optional oil burner engine will be a great addition to buyers who are new to EV's and have range anxiety prior to purchase.

I do not believe it has a chance to blast any EV out of the market, and by that, I mean EV manufacturers that care to sell EV's in volume. That excludes Toyota, GM, Ford, Chrysler/Fiat, Daimler, Honda, VW, Audi; virtually all the world's top manufacturers. BMW does not have close to the dealer distribution of Nissan, but they do have good coverage in the areas most likely to buy the car (west coast USA, urban northeast USA). But, Tesla has far less "non-dealer" stores than BMW.

The only players serious about EV's appear to be Nissan, Tesla and BMW. I wish all three all the best.

Not disagreeing with what you said, Tony, but there was an interesting article on InsideEVs this morning. Wonder what practical implications it will have, if any:

Looks like the production-intent wheels have been revealed. BMW doesn't seem to be hiding much now besides the interior for the official i3 "unveiling" on July 29th. Hopefully they'll offer specifications and pricing also. 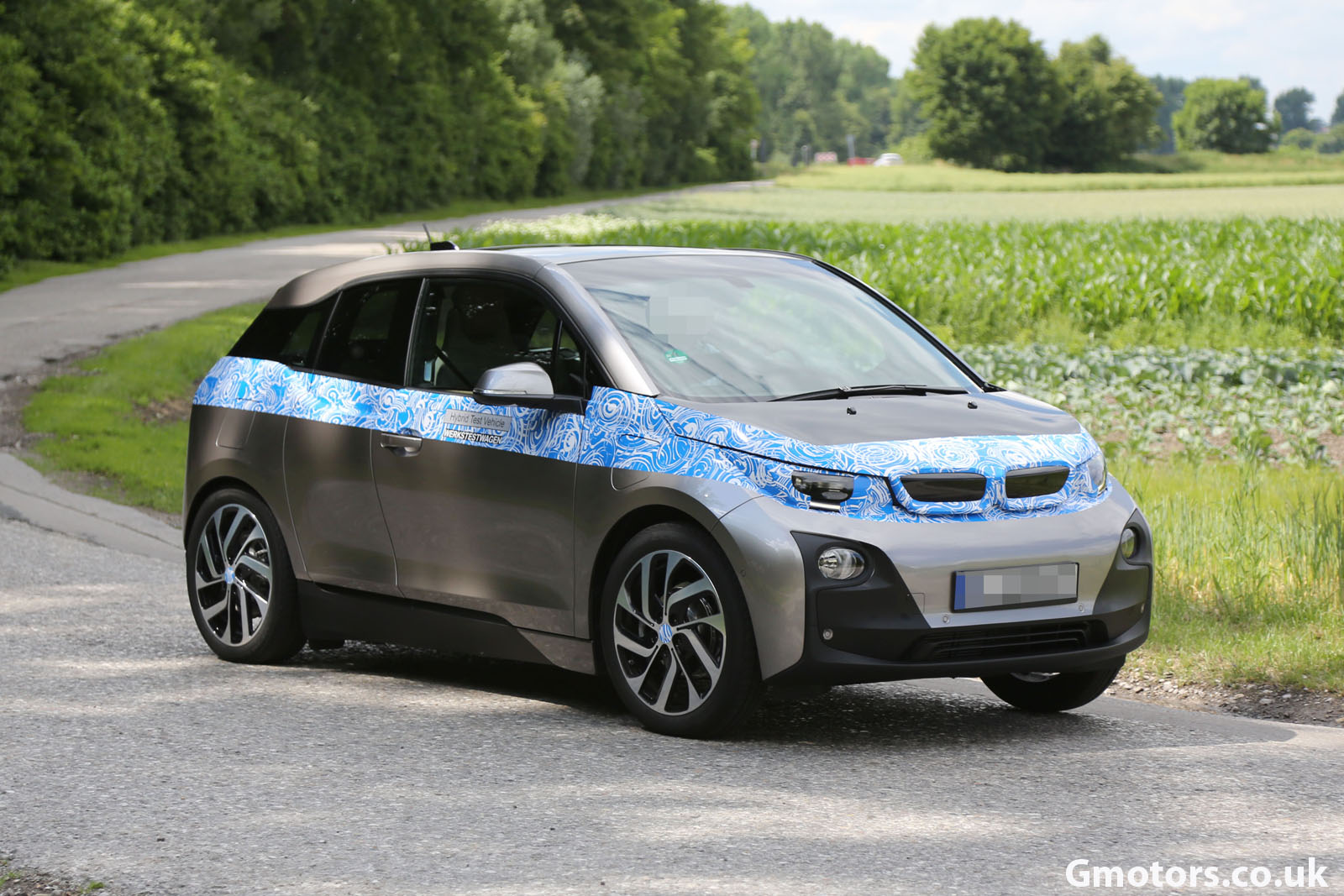 
TomMoloughney wrote:BMW doesn't seem to be hiding much now besides the interior for the official i3 "unveiling" on July 29th. Hopefully they'll offer specifications and pricing also.

What is the charge time and amp draw on this little beast ?

The paint treatment on the lower front of this latest pic is less attractive than I had hoped to see. It looks like they just masked off the outboard sections near the lower lights and left them original black carbon fiber (or plastic, which is the material for the body panels IIRC). For comparison, look at the pic of the metallic orange Coupe Concept, up thread. I hope that the paint treatment on the final product is more like the Concept.
Last edited by Boomer23 on Sat Jul 06, 2013 5:24 pm, edited 2 times in total.
2018 Tesla Model 3 Long Range RWD
2017 Chevy Bolt EV Premier Kinetic Blue
Blog: http://drivingelectric.blogspot.com" onclick="window.open(this.href);return false;

KJD wrote:What is the charge time and amp draw on this little beast ?

Are they going to sell these in all 50 states or is this a CA only car ?

BMW has been advertising a 3-hour recharge time with a 32-amp wall box on what is rumored to be a 22 or 23 kWh battery pack. If the ActiveE is any guide, you can expect to see about 28 amps from the onboard charger, which translates to about 5.5 to 6.7 kW power draw, depending on line voltage. I think Tom would be more qualified to address the question about sales and the availability of the i3.
Post Reply
Load more posts
1668 posts