Drivers door handles won't open door.....both inside and outside will not open door. Lock mechanism seems to work fine. Spoke to Nissan service and they have never heard of this....even though the internet is full of Altima, Rogues and Muranos have this issue. So can the door panel be taken off of the door when it is closed or do I have to destroy the panel to remove it to access the door latch system?

Dealer did not know how to get it off without wrecking the panel, and they quoted me 585.00 for a new inside panel.
Body shop also suggested getting a panel. I did find one on EBay, same color as mine for $100.00
I assume it is the door actuator
This is a 2012 and out of warranty.

The only time I've physically seen the problem was w/the preview '13 Leaf brought to https://wheels.blogs.nytimes.com/2013/0 ... 013-model/. The passenger side door mechanism was busted. The door couldn't be opened from the inside nor outside.

I think there is a plastic moisture shield that you may damage also. You could try to reach in and unlatch the door after removing the switch assembly before breaking the inside panel (don't know if there is enough room). I have been on this forum for quite a while and this is the first I have read of a door unable to be opened.

Ok....really disappointed at Nissan Service....
They told me they would have to destroy my interior door panel to get door open....I found a door panel on EBay and bought it....a friend who is a locksmith asked me to try his luck in opening the door....well in 15 min he had it open....Nissan did dent even try or suggest that.
Looks like it is the actuator and I will have a local repair shop do this. Now the door panel I bought is going back....at my expense.

I just had this happen, but with my front passenger door.

It was a pain in the butt to fix. The problem being that there's no good way to get to the stuck part while the door is shut.

Description of Problem and Fix

I'll describe the issue. Here' a picture of the door lock actuator.
If you open the right front door, you can see the slot, and the three bolts that hold it to the door. 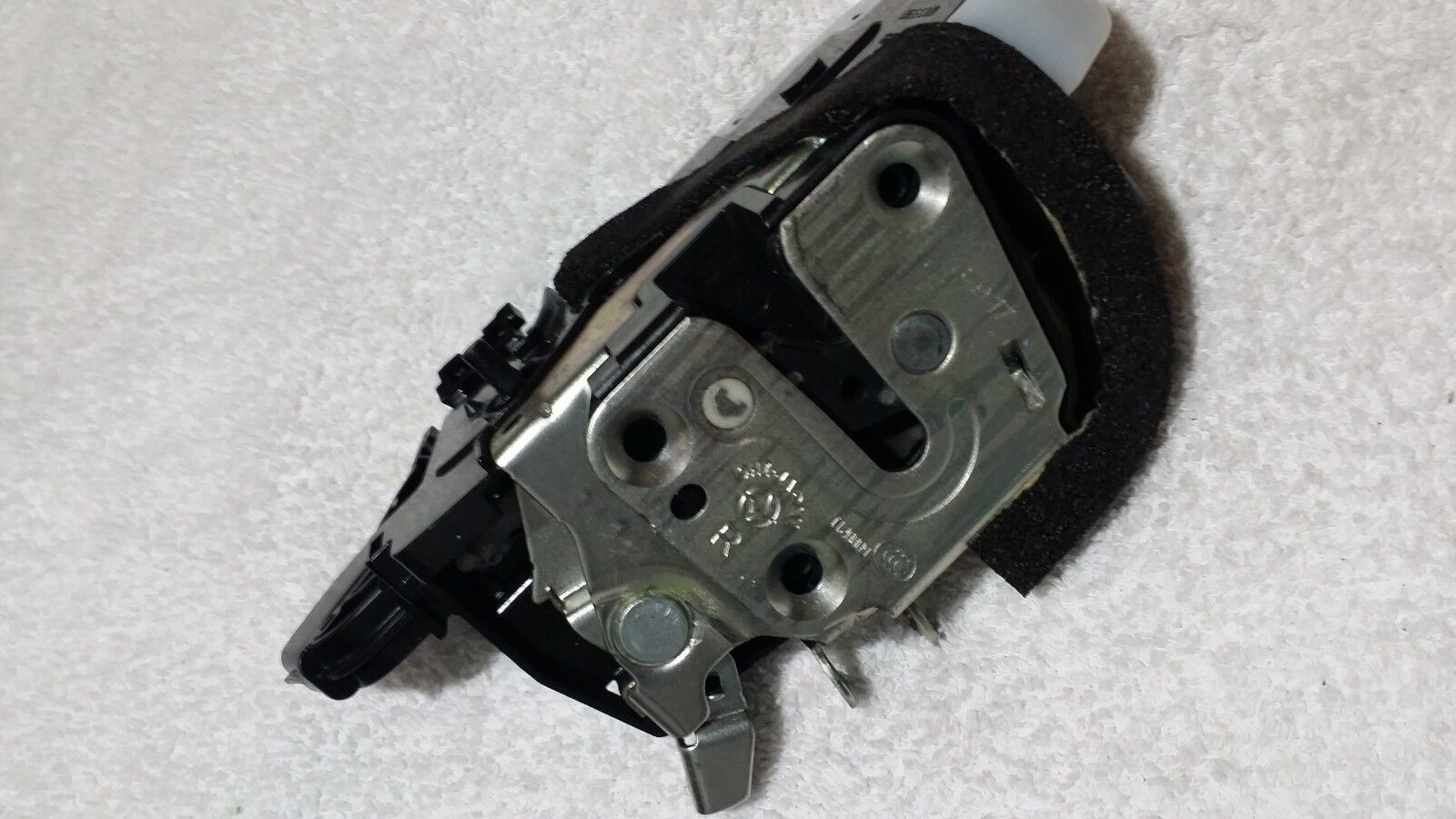 At the bottom of that piece, under the "R", there is a round pivot point. It is spring-loaded, pushing that arm that's protruding to the right and below further down, away from those other two small protruding brackets off to the right side. Well, that pivot point got a bit of rust on it, causing it to sometimes get stuck so that the spring couldn't push it back open. The fix is to clean off the rust and lubricate the area. I sprayed it with WD-40 and used a dremel with a wire wheel to clear away most of the rust. I then sprayed it with a silicon lubricant before putting it back in place.

Accessing the Door Lock Actuator Once the Door is Open

If you have a 2012 or earlier Leaf, you might want to pro-actively take this part out, clean it up, and lubricate it to prevent this happening to you. I plan on doing so with my other front door as soon as the weather gets a little nicer.

First, remove the panel with the window switch an push-button door lock. Use a plastic prying tool to lift up the back a little, Then keep lifting upwards and backwards. The front has a strong hook - you must start lifting from the back. Then disconnect the wiring harness. In the cavity, you'll see a bolt that needs to be removed. I believe it was a 10mm.

Next, remove the little plastic panel behind the door lever. Again, pry it out with a plastic prying tool. Behind there, you will see another bolt that needs to be removed. Do so.

Next we remove the whole door panel. Put the window down. The panel hooks over the top edge of the door frame. Lift it out of the window slot, and start pulling it away from the door. There are several plastic retainer clips holding it on. Just pull hard and they'll pop off. with the door partly removed, you can unlatch the two cables connecting the door lever and manual lock switch. Basically, you move the cables perpendicular to the panel and then lift them out. Then you can remove the door panel completely.

Now we need to remove the bottom part of the window guide. Put the window in the up position. Pull away the clear plastic vapor barrier from the rear half of the door. If you keep it clean and don't let that black sticky stuff touch itself, it'll stick right back in place when you're done. If you look inside the door cavity, you can see the lower part of the window guide. There is one bolt holding it in place on the inside of the door. Remove that bolt. Then pull the metal guide out of the door. The rubber part of the guide will remain inside, but it can now be moved out of the way to maneuver the door lock actuator out.

Finally, the door lock actuator itself. Remove the three Torx bolts holding it in place. You can then carefully remove it through the door cavity. You can leave the two cables attached to it that you had removed from the panel. There is one electrical connector attached - remove it. There is still one cable left attached - this is the one that's giving us trouble. It's easier to remove after you've removed the actuator from the door panel. It's held in rather tightly, so you'll need to use some pliers to get it out.

How to get the door open in the first place

I don't really know. I was messing with all sorts of stuff trying to get to that area, but it's almost impossible while the door is closed. I think I just happened to get lucky, or happened to bump it hard enough to allow the spring to push through the rust. With help from the picture above, you can see where the problem part is. I think we should just be able to bend a coat hanger, shove it down beside the window and try to bump that rusted part so that the spring pushes it back downwards.