Hi all,
Does anyone have any details on how LeafSpy (I use LeafSpyPro) measure the Wh used in its app?

My kWh/km figure from the LeafSpy is different from the one reported by the dashboard (I'm using 2012 Leaf).

The difference is quite large, and I need the remaining kWh figure to be accurate so that I can predict remaining range accurately (as my 2012 Leaf battery degraded as expected). Every kWh is valuable (which worth 7 km per kWh!!).

In the example I have from this morning, according to LeafSpy, I have 7.6kWh remaining on my battery (4.6kWh used). However, if I use the 0.15kWh/km figure from the dash (reset at the same time at the start of the trip with LeafSpy), I should've used merely 3.5kWh only, which means I should have 8.7kWh remaining instead.

What I've found interesting from past experiments, as I deplete the battery further to empty (under 2kWh remaining, i.e. VLBW), the remaining kWh figure paused (but the used kWh still grows). As if it's playing catch up with the difference. Hmmm...

You have to know two things about the LeafSpy kWh reading to make sense of it:

1. It is the energy in the battery, but it includes the bottom 1 - 1.5 kWh (not sure of the amount) that is reserved by the car to prevent battery damage and is not user accessible.

2. The kWh value is calculated by multiplying the Ahr remaining by ~ 360 Volts. That is a fine average if you are starting from a full charge but it is an over estimate for the bottom 1/2, let alone bottom 1/3 of the battery charge.

----
What to do ?
For the bottom 1/3 of the battery multiply the Ahr by 0.300 Volts to get usable kWh remaining. This is an estimate but it should be pretty close. Then you can use your anticipated Wh/km to estimate range remaining until empty.

Since 0.3 * 7 = 2.1, you can just double the Ahr reading of LeafSpy for a km remaining estimate .... and still have a few meters left in reserve

Hi SageBrush, thanks for the reply.

Regarding your point 2 above, "The kWh value is calculated by multiplying the Ahr remaining by ~ 360 Volts", this is not how the LeafSpy app get the remaining kWh figure though right (i.e. the 4,691Wh in my screenshot)?

So far as I know, the Ahr is from coulomb counting and the pack voltage is directly measured.
360 Volts is a generally accepted 'nominal voltage;' that is, the average voltage obtained from empty to full.

You may be right that nominal is not used by LeafSpy. Perhaps the pack voltage is.

I hope we're talking about the same thing...

kWh = Approximate energy currently stored in the battery. This number is calculated by multiplying the number of Gids read from the Leaf times the Wh/Gids set on the Settings/Battery panel. The default Wh/Gids is 77.5. The calculated kWh gives the best indication of available energy in the battery
...
GIDs This field indicates the remaining energy in the battery in terms of Gids. Gids is the name given to a value found on the Leaf CAN bus that tracked closely with the amount of energy remaining in the Leaf Battery. It was first discovered by Gary Giddings. Later it was determined that Nissan uses this field to indicate the amount of usable energy in the battery by multiplying it by 77.5. On a new 2011 Leafs the maximum Gids is typically 281 or (281 x 77.5) 21.78 kWh of usable energy from the 24 kWh battery. Tapping the label to the right of the value will toggle the value between Gids and percent Gids.

Hi cwerdna,
Thanks for the reply. Ah yes, I should've consulted the manual earlier.

The original question remains though, what is the most reliable figure for remaining energy stored within the battery?

As I've commented above, when the battery depletes under VLBW, I've found the number started to pause (although the used kWh still grows).

I like the SageBrush idea using Ah. My guess Ah remaining is the most accurate one (easier to do accurately maybe, such as coulomb counting)? However, that doesn't translate easily to energy remaining (so I can calculate quickly how many kms or miles left). Looks like that's my next experiment...

Again, I won't need to do all of this if my usable battery capacity is not down to less 12kWh at the moment. Every kWh is so valuable for me

I wouldn't treat the kWh figures from Leaf Spy as gopsel due to the reasons I already mentioned. I would just go by battery gids.

Obviously, in gen 1 Leaf, there's no UI at all telling you how many kWh remain in the battery either.

I'm not sure what kind of calculations you're doing. There's already a smarter GOM built into the Leaf Spy, but the Leaf Spy UI has changed a bit since the video was made.

Sorry for the earlier error.

cwerdna wrote:I wouldn't treat the kWh figures from Leaf Spy as gopsel due to the reasons I already mentioned. I would just go by battery gids.
...

Hi cwerdna, you meant the kWh figure used? Yea, I agree. This is wildly different from the car's dash. However, I think the GID suffers the same fate (i.e. inaccuracy within +/-1kWh, which is LARGE inaccuracy for my dilapidated 2012 battery). Definitely not a problem for newer leaf.

The reason I'm doubting the GID, is because it's 1kWh off, if compared to energy used (i.e. my first post experiment), i.e.:

From the experiment above, I was expecting LeafSpy reported 8.7kWh remaining (i.e. leafspy used kWh to match up with the car's dash). Hence, the confusion and the start of this thread

. From what I've observed so far, the figure used by the car's dash (3.6kWh) not passed to LeafSpy?

The return 24km trip (I haven't posted the screenshot), had the opposite problem. LeafSpy reported 77Wh/km, where as the dash reported 0.12kWh/km. I have a gut feeling the dash has more accurate used kWh figure compared to LeafSpy (as my journey is relatively flat).

My guess, LeafSpy uses calculated value from GID to get used kWh, i.e. the 4,691Wh figure from my screenshot. Where as the dash use volts * amps * time? It's a guess from me. I am aware the clamp current meter used by Leaf is not a precise measurement device either.

Looks like the GID has difficulty in predicting the remaining kWh in my battery due to age (it's quite accurate at fully charge and under VLBW though...). Note that my battery SOH is 69% with HX 47%. Dilapidated indeed: 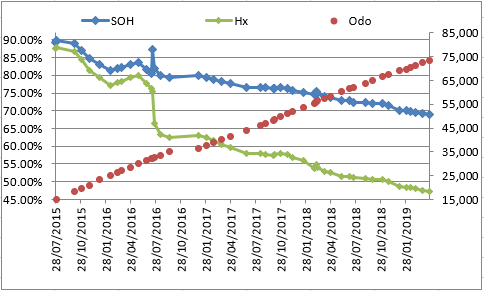 SageBrush wrote: ...
I'm not sure why fraction of GIDs remaining rather than SoC is used. My guess would be to not include the brick reserve.


Agreeing with you. It's also more practical to have energy unit remaining.

I won't be able to respond in more detail for awhile...

Rusdy wrote: My guess, LeafSpy uses calculated value from GID to get used kWh, i.e. the 4,691Wh figure from my screenshot.
...
Agreeing with you. It's also more practical to have energy unit remaining.

You can check as to whether your guess is correct changing the Wh/Gid setting in Settings to something other than the default 77.5 and seeing if the kWh or whatever value in Leaf Spy's UI goes up/down.