Drive The ARC (DTA) and EVgo

Today, while charging for free thanks to a special promo ticket, I saw a Model X pull up and charge using CHAdeMO. He arrived with 16% SoC and could see his rate was around 40 to 42 kW. I'm guessing he either had a special free promo ticket from filling out a survey or was taking advantage of the 75% discount promo ticket that was going on for that time block.

There are at least two folks in the Bay Area over on TMC who use their CHAdeMO adapter on a regular basis, one of which had his adapter pay for itself thanks to free DTA juice.

One bummer is that the site closest to me used to have two DC FCs and both could be used for DTA. Once the "congestion" charges began and they started giving variable discounts, one became free by reservation only (not a big problem, I tried) and the other could use the variable discount tickets. I'm guessing that was a mistake as the reservation station is now removed from the DTA app.

Last night, I was at a DTA site when a gen 1 Leaf (SV or SL trim) showed up and I asked he if knew about Drive The Arc. Apparently, he didn't and was planning to pay EVgo to charge. I got him signed up and going. Luckily, it was past 11 pm at that location so it was during the free promo ticket period.

He seemed aware of DTA (likely due to the graphics printed on the charger and what's on the screens) but he said he thought it was just a concept. I told him that it had been free CHAdeMO charging since day 1 and only CCS became free recently (quietly).

Oddly, he didn't know to use Plugshare either. He said he had it before but deleted as it felt it was just a map. I told him about it being helpful to check scores and recent check-ins before going to a site. He mentioned that if he encounters problems he calls it in (to EVgo, I guess).

There was an issue with DTA reservation charger at Lucky’s on Bernal road not showing up on the app for a while, but it was available for free use by calling the EVgo help line.

But that bug has been fixed and it has been showing up on the app for a couple of weeks now. 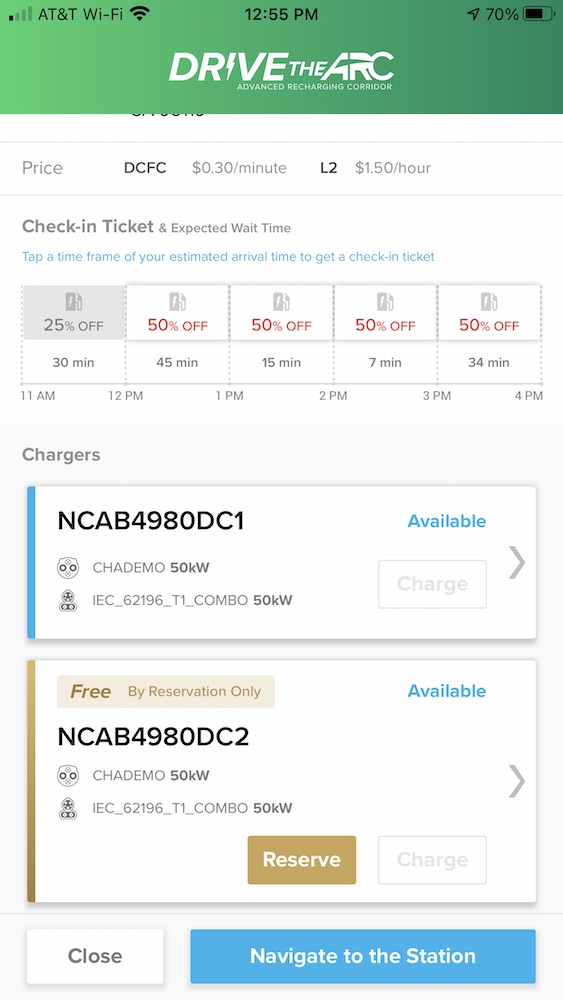 OrientExpress wrote: ↑
Sun Oct 04, 2020 1:04 pm
There was an issue with DTA reservation charger at Lucky’s on Bernal road not showing up on the app for a while, but it was available for free use by calling the EVgo help line.

But that bug has been fixed and it has been showing up on the app for a couple of weeks now.

While bumping into a Bolt driver at Lucky's at Bernal, we discovered the the reserve button is broken in the Android version of their app. He uses Android and has never been able to reserve. He had to call them to start the charger. I'm an iOS guy but also carry an Android work phone. Sure enough, I can confirm that for both Lucky's at Bernal and Pacific Pearl Pleasanton (have never been there yet), both of their reservation chargers show a greyed out non-functional reserve button on their Android app while they both work and aren't greyed on iOS.

I dropped the DTA Android support folks an email. The Bolt driver also mentioned it to the CSR on the phone.

15 weeks ago, when the only reservation station was Pacific Pearl, a Bolt driver pinged me on FB about how to reserve as he said he couldn't on his Android phone. I shrugged as I had no reason to go there, so I never tried. I guess it might be a long-standing bug.

Tuesday night update: Amazing! I was at Lucky at Bernal having used my 3rd reservation and about to leave and a gen 1 Leaf driver pulls up to DC1 (the non-reservation station). I ask if he wants to switch to DC2. He said he was good. i told him I could get him charging for free. Apparently, he didn't know about DTA and planned to pay EVgo. I got him going on CHAdeMO on DC2, the "reservation" station and showed him the app. I suggested he get the app himself since the reservation was going to end at 9:55 and stop charging....

He was also lucky that the CHAdeMO handle on DC2 was repaired recently.

He also didn't know about Plugshare, which I showed him. I didn't ask but I suspect the Leaf was bought used. It had steel wheels but with hubcaps that I've seen on other used Leafs but that are definitely NOT stock S trim hubcaps.

I encountered another Bolt driver at a DTA site. He was about to start his DC FC by paying for EVGo and I asked him if he knew about DrivetheARC. He said no. I had to eat my lunch as it was getting cold but briefly showed him the app, explained to him the promo ticket vs. reservation station, pointed out the signage on the stations, etc. I suggested he sign up while charging so that he can stop his charging and get a discounted charge.

In part of my convo he asked me as to who's paying for it, I mentioned that it was free for CHAdeMO users for years (e.g. due to Nissan and Japanese company funding) and that it wasn't free for CCS until earlier this year, when that was quietly added. He asked "what's CCS?" I explained to him the three DC FC standards in the US, Combo1 flavor of CCS vs. Combo2 (in Europe) and so on...

Anyway, he didn't seem to sign up and was still on his original paid charge when he left whereas I had just started my 2nd totally free reservation charge. At the time he started, the non-reservation station was at 50% discount. By the time he left, it was into the only 25% discount bracket.