This review was interesting as a Long Term Nissan (since 1973) Fanboy.

I really like the car. I hope it does well.

Absolutely coincidence but my wife had her aero covers wrapped on her model 3 and they kinda look similar from a distance. Go figure. 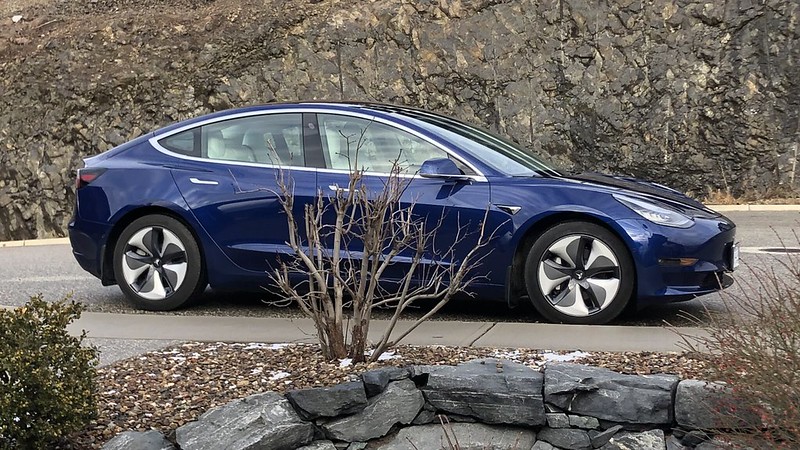 Gale, there is already an Ariya topic. I'll move these posts to it later, unless someone has a compelling reason for there being another one.
Brilliant Silver 2021 Leaf SV40 W/ Pro Pilot & Protection
2009 Vectrix VX-1 W/18 Leaf modules, & 2 lithium E-bicycles.
BAFX OBDII Dongle
PLEASE don't PM me with Leaf questions. Just post in the topic that seems most appropriate.

Assuming anyone cares, via ABG:

2023 Nissan Ariya EV pricing starts at just over $43,000
And prices rise to $60K among six models of the stylish crossover

There are six grades of Ariya with various drive and battery configurations. Nissan says MSRP for the Ariya range starts at $43,190; a destination fee was not disclosed, so it's not included in the prices shown in this post. $43K gets you a FWD Ariya with a 63 kWh battery.

Driving range on a full charge is rated at 216 miles for the FWD Engage base model, and makes 214 horsepower. Adding Nissan's "e-Force" AWD to the Engage trim reduces the range slightly to 205 miles, the least of any Ariya, and output jumps to 335 horsepower.

The Ariya Venture+ FWD has the highest range available, at 304 miles.

The Engage+ e-Force AWD model is the top performer at 389 horsepower. Its range is up to 270 miles.

And the top dog in price is the Platinum+, at $60,190, again, not including destination fee. This Nappa-leather trimmed model also has 389 horsepower. Its available 19-inch wheels bring the range rating down a bit, to 265 miles.

Here's the full trim and price breakdown. Any trim gets you the Ariya's fashionable and futuristic interior: . . . .

For more details, including details on how each trim level is equipped, visit the Nissan Ariya trim breakdown page.

The Nissan Ariya is assembled in Japan, meaning that it won't qualify for the $7,500 federal tax credit, based on new restrictions imposed by the Inflation Reduction Act.

Nissan Ariya sales will begin this fall, starting with front-wheel-drive models. Some of the AWD models will be available in early 2023.


See the link for prices and what's included in each trim.
Guy [I have lots of experience designing/selling off-grid AE systems, some using EVs but don't own one. Local trips are by foot, bike and/or rapid transit].

In looking for the best Ariya topic to move these posts into, I realized that aside from the one long one that starts well before the car's release here, there is no good place. How do you folks who posted in that one feel about having the recent posts moved here, instead? Or shall I just add these to the original one?
Brilliant Silver 2021 Leaf SV40 W/ Pro Pilot & Protection
2009 Vectrix VX-1 W/18 Leaf modules, & 2 lithium E-bicycles.
BAFX OBDII Dongle
PLEASE don't PM me with Leaf questions. Just post in the topic that seems most appropriate.

I have no strong feelings either way 'cause I'm not really interested in the car, but when I search for a general info topic for a specific car I usually assume the one with the shortest, most direct name is the right one to post in. Adding "Official" in front and "Topic" tends to confirm that. Out of the nine search results for "Ariya" limited to topic only, this is the one that seems the most general, and IMO most of the other topics' posts could/should be moved here.
Guy [I have lots of experience designing/selling off-grid AE systems, some using EVs but don't own one. Local trips are by foot, bike and/or rapid transit].

Review: 2023 Nissan Ariya turns over a new Leaf for brand

The 2023 Nissan Ariya not only represents the best new ground-up Nissan in years, it also reorients a brand that has seemed adrift since its erstwhile leader, Carlos Ghosn, ran afoul of the law. Yet the electric crossover is not without its problems, most notably in the recurring delays keeping it from the starting line.

Timing might not be everything, but it is definitely something. And Nissan knows this, as the first automaker to launch an electric vehicle for the masses way back in late 2010 with the Nissan Leaf. It seems like another era since then, but the past year has had an even greater effect on the Ariya. Scheduled for mid-2021 and derailed due to Covid-related chip shortages and production problems, the Ariya finally arrives at dealerships now, much later than the competition.

“The chip shortages have caused a lot of disruption,” Aditya Jairaj, Nissan’s director of electric vehicles marketing, told Green Car Reports. “We also want customers to have the right car.”

The single-motor front-wheel-drive model is the right car for now; it’s the only car. The dual-motor variant arrives early next year, but that gap was always part of the plan, Jairaj said.

So many electric cars have launched since the Ariya’s original launch date, including the Hyundai Ioniq 5, Kia EV 6, and the 2023 Volkswagen ID.4 Standard with a small battery and single motor that costs less than $40,000—the original target price of the Ariya. Now the 2023 Nissan Ariya starts at $44,485 and crests $60,000. The forthcoming Ariya e-4orce all-wheel-drive variant will add about $4,000 across the lineup.

Yet Nissan is not dissuaded.

“We feel that Ariya is hitting at just the right time,” said Brian Brockman, Nissan VP of communications.

Maybe so. Not only is the Ariya the brand’s most impressive new vehicle in years, it optimizes the interior space in such a way as to raise the bar for electric crossovers at this price.

Sized like the Nissan Rogue compact crossover but with an extended wheelbase like the Nissan Murano mid-size crossover, the Ariya has a wide open interior. It has a more rounded bulb of a roof, and a more upright stance than sportier electric crossovers such as the Kia EV6 and Ford Mustang Mach-E. . . .


There's much more. I'm still not interested, but maybe others are.
Guy [I have lots of experience designing/selling off-grid AE systems, some using EVs but don't own one. Local trips are by foot, bike and/or rapid transit].

The Ariya is really in a different price bracket than the Leaf. Even though I ordered a Leaf SV Plus 2023, I really did not consider any new EV priced over $40K US.
Post Reply
8 posts • Page 1 of 1