Anybody ever heard of "EZ Spare"

I've now built a plywood trunk rack, and it's in primer, with bolt holes drilled (but not yet countersunk) to bolt it down where the silly little hook for the bottom of the portable charger bag had been bolted. 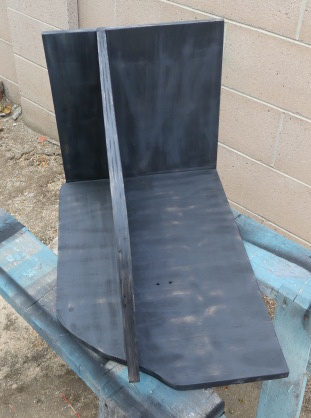 trunk rack in primer by James Lampert, on Flickr

The portable charger bag will go on the left side of the partition, and the donut (EZ Spare or otherwise) will hang on the right side.

Monday evening: countersunk the bolt-holes (having picked up some black-finished 6mm flathead Allen screws at McFadden-Dale on my lunch break), and then spot-primed them, and then shot a thin second coat of primer on the underside, to seal the dust from sanding the first coat.

Wed., 5/19/2021:
The trunk rack now has its second finish coat. Still looks like painted plywood, but it looks much better now. Third coat Friday evening. Another picture when it's installed (probably not until Sunday afternoon). No actual hanger for the spare until I have a spare to hang on it, though, since that will have to be designed around the spare itself, with both the spare and the rack actually in the trunk.
--
James H. H. Lampert

The trunk rack is now installed. Both bolt-holes lined up perfectly. Once I have a donut, I'll be able to make a hanger for it, and bolt it to the upright. 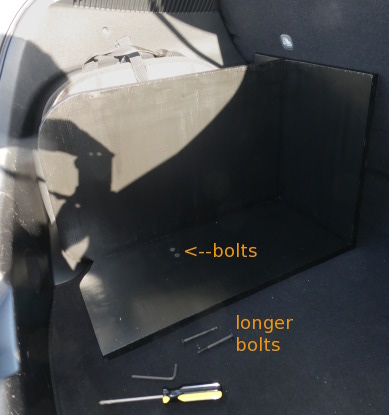 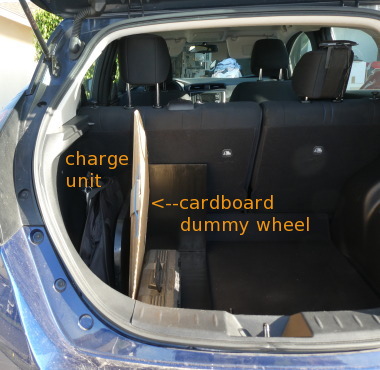 The car no longer smells like latex paint fumes, so I would imagine the four coats on the rack are now cured.

I ordered myself a jack, 2 pair of wheel chocks, and some grip clips to secure my lug wrench (and maybe the jack handle) to the rack.

Then, after due deliberation and diligence, and verifying that the appropriate mounting hardware for the vehicle does indeed come with the EZ Spare donut, I ordered one.
--
James H. H. Lampert

If, like me, you are bothered by the smell of rubber, you may want to make or buy a plastic cover or bag for the spare itself.
Brilliant Silver 2021 Leaf SV40 W/ Pro Pilot & Protection
2009 Vectrix VX-1 W/18 Leaf modules, & 2 lithium E-bicycles.
BAFX OBDII Dongle
PLEASE don't PM me with Leaf questions. Just post in the topic that seems most appropriate.

That, of course, depends on how much it outgasses, and for how long.

The paint fumes were pretty thick, that first day. But they tapered off. And the plasticizers found in "the hyde of a nauga" could be worse than the rubber.
--
James H. H. Lampert

It arrived today (after UPS had lost track of it for a few days). Too late for me to test-install it on my lunch break. 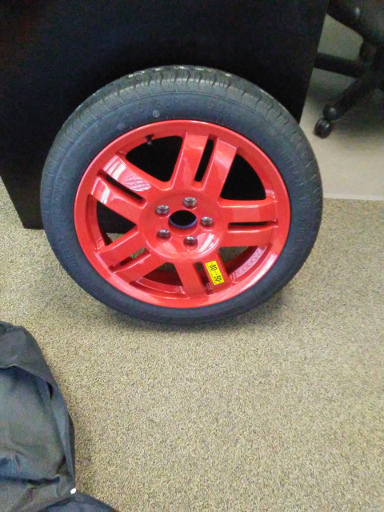 I was pleasantly surprised: it came with a canvas carry-bag. And the fittings to customize it to a specific lug pattern and hub profile are pre-installed, and unlikely to fall off spontaneously.

If it actually works as advertised, it's a tremendous piece of engineering.
--
James H. H. Lampert

EZ-Spare test results are in! 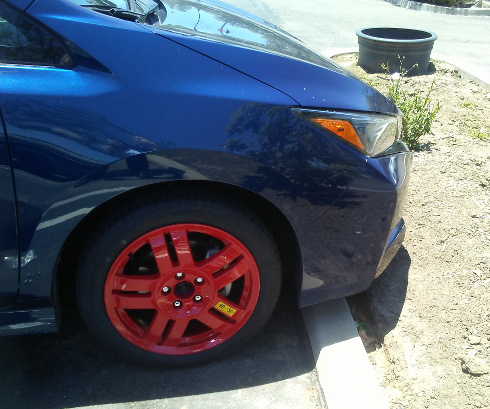 EZspare-2 by James Lampert, on Flickr
I tried it on starboard rear and starboard front, on my lunch break today, driving around the parking lot both times. It performed as advertised, and was not difficult to mount.
--
James H. H. Lampert

A place to put my "EZ Spare"

I started working on a fixture (a "dummy hub") to secure my new spare to the trunk-rack I built. I bought a set of 5 lugs and a small piece of red oak 1x8 on Friday, and by Sunday (my birthday), I was test-fitting it to the rack (at which point I got the end of my left thumb stuck between the hub and the rack while driving a drywall screw with a drill motor. Subungual hematomas are not fun, but thankfully this one is very minor).

I'm using a dummy hub with a full set of 5 lugs because the spare takes different lugnuts (taller and narrower) than the normal wheels, and so those lugnuts have to be stored somewhere. And red oak because it's hard enough for wheel lugs to anchor themselves in.

I now have 2 coats of primer and a coat of paint on the thing.
--
James H. H. Lampert

My spare is finally properly secured!

I finished my trunk rack this afternoon: installing the finished dummy hub to secure the spare, and a bracket to store the wheel chocks, and adding a strap to secure the jack, because I could hear it rattling just a bit. The strap (compound leverage velcro, like on laceless sneakers, wraps around a pin I made from parts of a door hinge) is visible near the top of the jack; the dummy hub is just visible, on the opposite side, secured with the three screws above the lug wrench (color-coded blue to fit the normal lug nuts, red to fit the slightly narrower ones for the spare). The yellow-and-black thing hung in a blue tube is the ratcheting handle that came with the jack, and potential rattle points are padded with black adhesive-back craft foam. 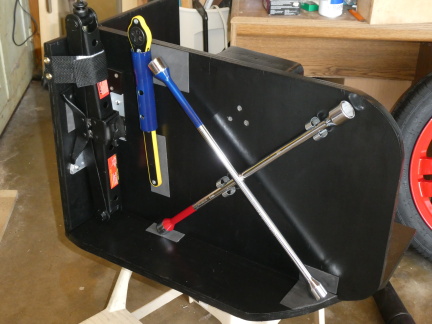 And here it is, back in the trunk, with the spare mounted to the dummy hub. You can see the portable charging unit on the left of the rack, and a stack of four wheel chocks are nested atop a shaped bracket to the right of the spare. 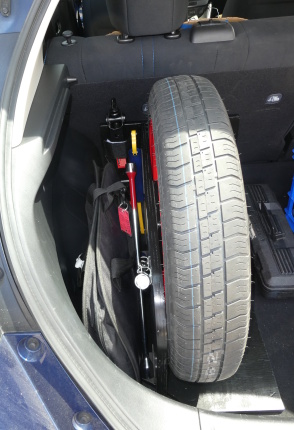 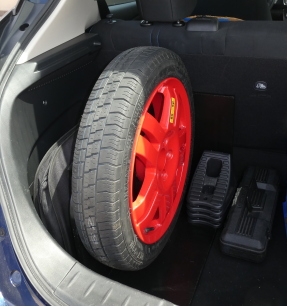