jkenny23 wrote:You can do some reading about cell balancing for why this wouldn't really work to increase range/capacity, the gist is the weaker cells will reach "full" first and signal the end of charge/discharge before the stronger cells and eliminate any benefit.

Thanks, that makes sense already. So it'll be all or nothing in a few years' time.

Feng wrote:I'm curious to know: Any harm in swapping only a few of the modules out rather than the whole pack? Eg, suppose I don't want to spend so much but want a range boost, could I go halves on a salvage pack with a fellow LEAF owner?

Hi Feng,
That is why LeafSpy is so useful.
Look at the cell balance when the pack is full (SoC near 90%) and again when the pack is empty (SoC near 20%)
You will see that the average cell voltage changes from about 4.1V down to about 3.7V and the difference between modules is typically around 20mV, should be less than 100mV anyway.
But if you find a cell that is high when the pack is full and that is (extremely) low when the pack is empty,
that is a cell with lower capacity than all the others. If you find that situation, it makes sense to replace just the module containing that cell to increase the capacity of the whole pack, because the capacity of the whole pack depends on the lowest capacity cell, because all cells are wired in series.
Most packs that I see have very similar degradation between cells, they stay pretty good "together" at low and high State of Charge (SoC) so there is no point in replacing half the pack.
To compare it with another similar example:
if you need to hoist something with a rope and you have two short ropes, each rated for 1000 pounds and you need to tie the two ropes after each other to get the length you need, it does not make sense to replace one rope with a stronger one as the second rope will still limit at 1000 pounds, only if you replace both with a stronger rope will you be able to hoist more weight, because the ropes are in series so the weaker one determines the strength of the total.
If however you find one rope deteriorated more than the other (like finding a weak cell in the pack) then it makes sense to replace that only.
Initial problems that were quoted where a single module was replaced were due to one failing cell in the pack, so replacement brought the entire pack back to original capacity. The complaint was that the usable range was suddenly half the original range. This matches the situation of a single cell failing, because a module for a 24kWh pack actually consists of 4 pouches (cells) which are 2-by-2 in parallel and the two pairs are in series. Each pouch has 32Ah capacity at 4V so the capacity is doubled from the parallel connection to give 64Ah capacity and the two cell pairs in series add the two cell voltages, so 4+4= 8V for a module.
Losing a single pouch in a module, reduces the capacity to 32Ah so the total pack capacity (range) is suddenly half the normal.
This would be similar to half the strands of one rope breaking for the example of hoisting: the remaining half of the strands can only carry half the original weight. The weakest link determines the strength of the total.

VitaminJ wrote:How much would you estimate the battery weighs? Is it really 600 lbs as rumored? It looks like you were able to handle it yourself ok.

Most my time is spent working on the wiring of the modules, but what is not so clear (unless you find the right frames in the video) is that I have a helper to carry the stacks.
The weight of the stacks is just over 100 lbs for each of the two front stacks with 12 modules and just over 200 lbs for the rear stack with the 24 modules.
This is logical as each module weighs 8.4 lbs. And there are steel end plates to compress the modules.
The battery shell is well over 120 lbs for the double-walled bottom and approx 30 lbs for the top and then there is some weight for the contactor box, the disconnects and the wiring loom and the many bolts.
That is why the total pack weight is around 600 lbs.
Cor.

End next week I expect to have another 2014 Leaf battery available, in case someone is interested.

Do you make cross-country house calls?

I dropped my fourth bar last week. I called Nissan, but I'm well out of warranty and they wouldn't offer any discount on a replacement pack.

garsh wrote:Do you make cross-country house calls?
I dropped my fourth bar last week. I called Nissan, but I'm well out of warranty and they wouldn't offer any discount on a replacement pack.

Freight shipping of a pack is about $500,
I shipped one in a crate last month to someone on the East coast.
There was actually a pack available not too far away from him, but before I could arrange it,
it was bought by someone else in California, so I had to ship a pack from California to the East Coast. Crazy.
Cor.

Here's an update on how my Leaf is adjusting to the "new" battery:

I picked up the 2014 battery and noticed some dents in the exterior shell, which did not concern me too much as I have seen plenty junkyard packs having huge dents, only to be a cosmetic issue. The BMS reported 55 Ah which is decent, about 85% capacity left.
But just to make sure, I took the top shell off and then noticed that two modules are actually affected by one of the dents in the top shell,
the alu covers around the module are slightly bent and one of the 4 pouches (cells) inside are pushed a bit to the other cells on the top.
While there seems to be no adverse effects, no leaks or anything, I am a bit hesitant to use this complete pack in a car
so I will likely end up returning it or selling the remaining 46 undamaged individual modules.
Bummer.

jkenny23 wrote:Here's an update on how my Leaf is adjusting to the "new" battery:

Cool pics, showing how the BMS is aging out old info and averaging the new data

Looks like the BMS has slowed down to a much more gradual slope recently, and still tracking better to miles rather than time. Still showing 5 bars on the gauge but have nearly full range (around 70-80mi on the GoM after a full charge): 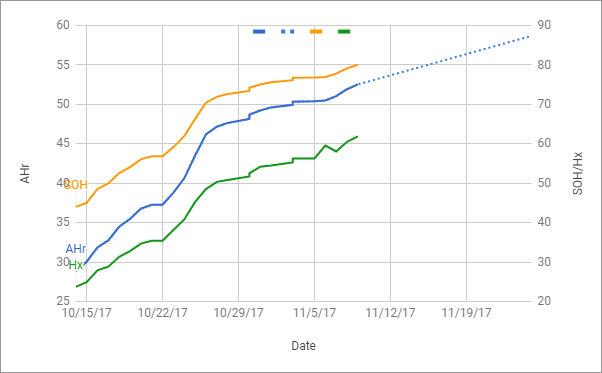 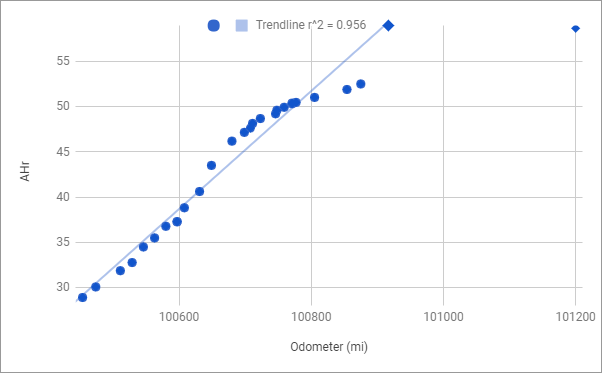