GRA wrote:Disillusioned about what, the fact that it's sold well?

GRA wrote:Disillusioned about what, the fact that it's sold well?

Disillusioned about EVs in general.

That is probably because you have a Leaf. I became disillusioned with my Leaf after 6 years as the range shrank from marginal to small and gave it to my nephew in Seattle. It works perfectly for his needs. I am very happy with a used Tesla Model S which I have had for the last two years (and much prefer to the model 3). I routinely drive 140 miles on Saturday at 70 MPH including 5000 feet elevation gain in the mountains without being even close to needing to charge when I get home... and I only charge to 80% for those long drives. There is no detectable range loss over 2 years since I acquired the Tesla. A coworker has Bolt EV which he and his wife love. You need an EV with excellent range and proper TMS if you live in Southern California.
2011 Leaf with 62,000 miles given to Nephew
2013 Tesla Model S85 with 251 miles rated range at full charge
Leaf Spy Manual
Battery Aging Model Spreadsheet

Valdemar wrote:My Leaf ownership was not ideal but worked out okay considering the free replacement pack. I'm disillusioned because of the slow adoption rate, need for government subsidies to support that low demand that there is, and the cost of out of warranty repairs. EV ownership is still a risky endeavor, even if it's fun when it is a Tesla.

To get this back on topic - govt subsidies for the Model 3 will be cut in half again in less than a month. Even after having gotten cut in half 5+ months ago, plenty are still selling thanks to Tesla's ability to scale production and reduce the price of the Model 3 (and S/X) more or less in step with the reduction in federal tax credits. By the end of this year, Tesla won't qualify for any federal tax credit, but I would bet that the 3/S/X will still be the best selling EVs in their class or at least near the top.

Tesla does not stand still - they will continue to find ways to reduce manufacturing costs. If their Maxwell purchase pans out, that should put their batteries at a price/performance point that will lower purchase price to a point where an ICE purchase almost never makes sense. 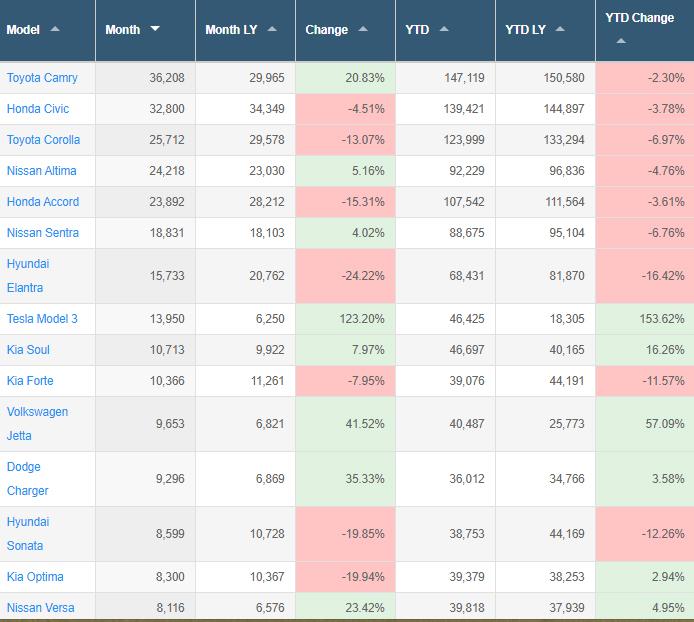 mtndrew1 wrote:Must be fake news, I was told there was a demand problem. (They’re EVERYWHERE)

mtndrew1 wrote:Car sales of all propulsion types, segments, and brands are generally reported as year-over-year for a variety of reasons. Car sales are more seasonal than other purchases (tax refunds, tax credits, school year beginning/ending, etc all influence auto sales). EVs in particular are extremely seasonal.

Every month in 2019 has seen a dramatic increase in Model 3 sales as compared to the same in 2018.

YoY sales of the Model 3 in the US have increased nearly 2.6x, not including sales in Canada, the EU, and China.

You are comparing a period during which Tesla was still ramping M3 production up in all of 2018 to meet U.S. back orders, so the Y-o-Y numbers won't be directly comparable. Only when we get into the fall and winter periods will we know beyond any doubt how demand is holding up.

Model S/X are a different matter: Model S sales are down about a third (1,025 May 2019 vs. 1,520 in May 2018) YoY, Model X is only down about 5% (1,375/1,450), so the latter is basically flat, and both are down a fair amount for the total of the first five months YoY, so it's fair to conclude that demand has been satisfied for them. And the e-Tron's sales jumped from 253 to 856 in its second month of availability, so it will be interesting to see if that's just satisfying initial demand or whether it will overtake the X. Then there's the EQC arriving later this year, which will provide even more competition for the X.

You and jiv continue to ignore the realistic/appropriate comparative data, i.e. late 2018. If the data are shown graphically, it indicates
M3 sales are off since Q4 of 2018 - a decline of M3 demand!

No one is pointing out y-o-y numbers. The Model 3 hasn't been out of ramp up for that to make sense, and the Q4 numbers were inflated by the push for people to get in on the federal tax credit. (calling that a "decline of demand" is just a negative spin, but who cares about that nonsense)